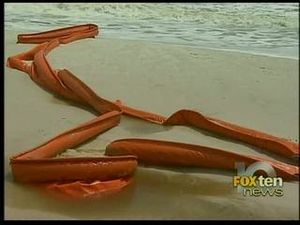 A boom as it expands from "transportation" mode to "storage/use" mode.

ESCAMBIA COUNTY, Florida -- As morning breaks over the great state of Florida, police officials notice that something is wrong; the three-quarter mile boom that was protecting the shores from the growing oil spill disappeared. The 3,400 foot boom was placed in response to the spreading oil spill that occurred about 2 weeks prior. So far, although no actual suspects have been found, police have identified a man who is approximately 6 feet tall on security footage who seems to be stuffing the boom into his pants while he believes that no one is watching.

Sheriff John P. Freeman of the West Florida Police Bureau had this to say: "We're still unsure as to how the thief managed to fit the thirty-four-hundred foot boom all in his pants. I mean, a 1,000 footer maybe, but 3,400 feet? That's just amazing!" When asked about why a person would ever want to steal a boom, local orange grower Clive Staples said: "Well this is Florida where people seem to have a natural affinity for orange things, but it just seems a bit impractical. I mean, why not steal a traffic cone or a glass of orange juice which are much easier to transport and a good deal smaller?"

The boom, which costs more than an average person makes in a year, is just one in a number of boom snatchings in the area directly around the Gulf of Mexico. There have been at least 13 other booms stolen from beaches protecting against the oil spills, ranging from 2,000 feet to 5,300 feet in length. Expert criminologist Patty O'Barbar suggests that the various reasons for stealing these expensive hunks of crap could possibly range from idiotic attempts to sell them back to the companies that originally had them to keeping them as a souvenir. "The latter option is more likely." she says, "After all, when you're a mechanic or a greengrocer and then try to sell a boom that just 'happened' to come into your possession, people tend to get a bit suspicious."

Three of the stolen booms have been recovered so far. Two were found jammed into the workings of water rides at Disney Land and the third was found trailing out of a Georgia resident's chimney. The Georgian said that, "I wanted to keep it as a sort of trophy, you know? But I couldn't fit the darn thing anywhere in my house." When asked how he transported it to his house, the man said he "took one of those red coolers that you take fishing or to the beach or whatever and just shoved it in there."

As more and more of these booms were reported stolen, President Obama became interested in the issue. Mr. Obama said that "The Federal government will take charge of the investigations on May 15th in an attempt to complicate matters as much as possible and spend millions of tax-payer's dollars." The early results of these efforts can be seen as eighty-million dollars were allocated to purchase the necessary equipment to pursue this investigation. The equipment purchased was: a Kodak camera ($13-million), a magnifying glass ($27-million), vanity T-Shirts ($30-million), and "Other" ($10-million). While the expenses seem a bit lofty, President Obama and the other politicians involved with this decision ensured us that we should "let them worry about that problem and not pay attention to the unseemly amount of money that they had magically gained out of nowhere."

The disappearing booms have also concerned scientists who have begun looking into the phenomena that occurs when the half-mile to mile long things are stolen. The preliminary findings of multiple government-funded research projects (totaling a mere $10-billion so far) are that the booms seem to be able to fit in any sized container, no matter how small, if they are going to be transported in the near future. "It's just astounding," states physicist Brad Gardner, "These booms are so large that they're stored in warehouses, and yet when you go to transport them you can fit them in your pocket." All research so far has shown that as soon as the boom has sensed that it is no longer being transported, it "pops" out of it's container. Many scientists have attempted to contact the manufacturers of the booms, only to find that no company has ever been reported to have made them. Federal investigations into this queer issue (costing about $30-billion total) indicate that all of the world's booms were "found" shortly after the infamous "Roswell Incident." Further information is unknown at this time.

Although the local marine life seems to enjoy the oil, many businesses fearing damage to the tourism market are pleading for the booms back as quickly as possible. As one unnamed hotel manager said, "Oil and saltwater just don't mix well. I put some here in this glass, see? Would you drink this? Go on, drink it. DRINK IT!" One can only hope that these booms are found in time for the country to become engrossed in some other semi-unimportant idiotic issue, so that the American people won't have to deal with facing the larger problems facing them.