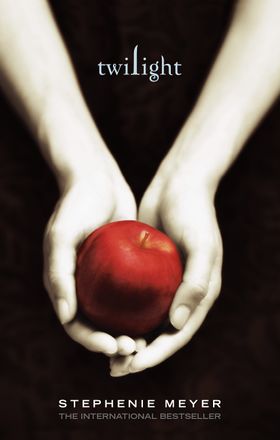 Words are hard. Math is hard. Life is hard. Having a boyfriend is hard — but important. Jacob's hands are hard, too. So are his teeth. But he's not the vampire; that's Edward. And you know what? Edward is hard — and cold — and a boyfriend; he is, along with Jacob, one of the stars of Twilight.

Twilight is a book about hardship and boyfriends and vampires, and it is also hard — to read, that is; the author, Stephanie Meyer, fills it with parentheticals and asides that sometimes get so far off track that it's hard to tell what the sentence, let alone paragraph, was even about, and sometimes, sometimes it gets to the point where the entire thing might as well be a nice, long, careening, self-contradictory minivan, because it's hard to tell where the entire thing is going when it's not going anywhere — which is hard, like Edward Cullen and Jacob... Jacob whatever his last name is; everyone just refers to him as Jacob (and he doesn't even appear much in this one anyway).

The novel itself is the first book in the Twilight saga — a compelling tale of romance and vampires — followed by New Moon, Eclipse, and Breaking Dawn, all of which are quite hard — they are, after all, targeted toward one of the lowest demographics: high school girls. Film adaptations and a graphic novel have also been made, or are in the process of being made, but tend to be much better than the books due to, according to some, a decreased influence by the original author on their creation, though as both were still closely supervised by Meyer, how much that is actually saying is dubious.

Essentially, they all consist of a lot of words and boyfriend implications and hard sentences, and the original Twilight is no exception to this rule.

Because sentences are hard.

And having a boyfriend is important.

Plot is hard. As such, it is lucky that there is less plot involved than the amount of words contained in the novel might suggest — the main character, Bella Swan, moves from one town, Phoenix, Arizona, to another: Forks, Washington/Oregon, where she proceeds to moan, continues to moan, moans about some other things, and moans some more. In-between this moaning things occasionally happen, events find themselves described — and moaned about — and Bella gets herself a boyfriend, which is good, because having a boyfriend is important. 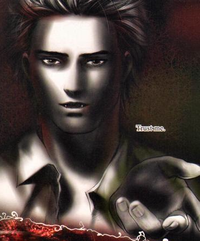 In her dreams, Bella pines after the ideal man, which is hard and creepy.

Having moved to a new town, Bella must enter a new school, full of new people who turn out to be rather unpleasantly friendly, and who take an immediate interest in her despite her unpleasant demeanour. There, she is sat next to a charming young man with strange hair, Edward Cullen, who unlike the rest of the school, takes an immediate dislike to her — when he runs away at the end of class, Bella is forced to try to figure out why, ruling out any chance that her sullen attitude might have had something to do with it, and indeed, when he returns to school a few days later after a completely coincidental disappearance, immediately warms up to her, even going to the trouble of saving her life when a classmate nearly hits her in a parking lot while she's busy, gazing at Edward longingly instead of watching where she's going.

After a lengthy investigation as to how he managed to do this, Bella determines that Edward was indeed not bitten by a radioactive spider, but instead must be a perfectly ordinary vampire. Confronting him with this, Edward confirms her suspicions, adding that he can also read minds, and he demonstrates this power by tearing a limb off a tree, since in Twilight, the ability to beat up trees is the primary method to indicate supernatural abilities. It is at this point that he takes her to a meadow and also makes the startling revelation that vampires in the Twilight universe, instead of dying when exposed to sunlight like decent creatures of the night, have a serious skin disorder resulting from the diamonds embedded in their skin, the implantation of which is a mandatory part of being turned according to vampire custom — subsequently, vampires sparkle whenever exposed to plot-convenient lighting, though this actually happens fairly rarely throughout the series, probably due to budget concerns. 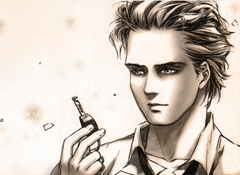 Edward contemplates how best to use Bella's car keys as a sex toy.

Having gotten that out of the way, they proceed to fall madly in love, because that is what teenage couples do.

Then the plot starts — requiring a minimum amount of action to sustain a book, Bella goes with Edward and his family, the aptly-named Cullens, to have a baseball game, which is subsequently crashed by another group of vampires who suddenly really want to eat Bella, apparently due to a vampire food shortage or something, despite there being billions of unclaimed other humans in the world. This forces Bella to run, hide, moan, get yelled at, break her leg, wind up in the hospital, moan, get yelled at, and moan some more.

Bella and Edward then go to the prom, thus emphasising why it is so important to have a boyfriend.

Characterisation is hard — but adjectives help. Just not specific ones. Actually describing the characters such that a reader could properly visualise them would render them no longer capable as serving as self-loathing, despicable, pathetic shells ripe for readers to step into and become themselves.

The very definition of a hard-to-imagine character, Bella Swan's defining feature in the novel is her knack for avoiding all manner of meaningful description. This would be notable were it not for the fact that she shares this feature with pretty much every other character in the book as well. What is known is that she is a 17-year-old girl with brownish hair who happens to be the protagonist of sorts and narrator of the series; much to the confusion of readers, Bella is a very sarcastic individual, constantly describing things as they are and aren't alike.

Bella is described as intelligent and mature for her age, although her actions do little to support this — sneaking out of the house to hang out with someone who wants to eat her, running though the woods when there is known to be something killing people, and in one case willingly going to what she actually knew would probably be her death, a more appropriate term would probably be 'stupid'.

Edward Cullen is the hard manifestation of many women's sexual fantasies. Twilight itself provides sufficiently little backstory for him to seem not completely unpleasant, but that was nothing more than an oversight on the part of the author, an oversight she later set out to rectify with the novel Midnight Sun — a novel which she cancelled when the so-far draft was leaked, and which describes in detail, from Edward's point of view, just what he was up to when he was stalking and kidnapping Bella. Specifically, trespassing, theft, stalking and kidnapping Bella, contemplating mass murder and infanticide, and other unpleasant things, and generally being hard, and scary.

Though Edward fits the technical definition of a creepy old man, his apparent youth and well-described colour — avoiding the urge to delve into extraneous and over-detailed information about Edward and Jacob proves especially hard for Meyer despite the lack of overall substance — enables others to look past his paedophilic tendencies, allowing him to continue romantically pursuing children to his heart's — or lack thereof — content. His vampiric aspects are similarly easily hidden or explained away, since Twilight vampires have no real weaknesses save for the odd quirk; Edward does find himself, at one point, for instance, strangely attracted to Bella's tuna breath.

James is a cliché. A hard one. Following the adage that good is beautiful and bad is ugly, as one of the bad vampires, of Twilight, James is described as merely 'average-looking', unlike the Cullens, whose otherworldly beauty is subject to many paragraphs of benevolent and inspecific adjectives — from the depictions in the graphic novel, however, 'lumpy' might have been a better word choice.

As for the character himself, the fellow is what could be described as the main bad guy of the book, though since he only shows up at the end to chase Bella into a dance studio in a fit of action, that's not saying much; he is a 'tracker', which means he tracks things, and when he decides to track Bella, he finds her to have not been worth the hunt at all, though for the sake of avoiding embarrassment for the protagonist keeps it to himself — as he is probably one of the more considerate people in the series, he is killed at the end of the book; there is little room for considerate or otherwise pleasant people in Twilight.

James is ultimately nothing more than a supporting character, who, like the other supporting characters, serves little purpose save to take up space, and who, like the others, takes up surprisingly little space, to the delight of fans and critics alike. Other such others include Bella's old friend Jacob, a recurring convenient plot device and sometimes boyfriend; Bella's parents on the rare occasions they get in her way; various friends, acquaintances and passersby; the Cullen family besides Edward; a group of rapists; and a wide assortment of trees. 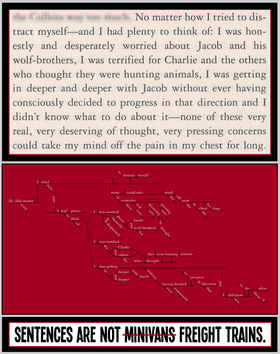 A reviewer examines the structure of a minivan-like 'sentence' found in one of the Twilight novels, concluding that this one is actually a freight train.

Style is hard, not wrong. In construction of this novel, the author takes grammar, for example, as nothing more than a set of guidelines; if Meyer wants to ignore them, she decudes such a stylistic decision is perfectly valid despite how others would argue that some words are just plain wrong in the given situations. Other words and stylistic, while less blatantly wrong, choices may also come across as lame, but like anything considered lame, that is merely a reflection on those considering it thusly, not on the piece itself.

Punctuation is hard but necessary if one wants to effectively construct minivan-like sentences, or sentences at all, for that matter. It is through the very creative use of punctuation, after all, that Twilight becomes the headache-inducing literary menace that it is, creating long and liquid sentences full of clause after clause and small and broken sentences. Containing nothing at all alike. Random commas placed willy-nilly are also common, a stylistic choice which helps to demonstrate the pauses in the narrator, Bella's, train of thought.

The abundant use of dialogue tags is an important part of Twilight — more important than dialogue, which is fortunate because dialogue is hard — and descriptors that, along with the tell-tale adjectives, are what enable the book to be so long. A typical conversation, for example, can go on for pages as follows:

Adjectives also help pad the content, operating in conjunction with an assortment of misused words, either in denotation or merely connotation, to confound the story.

Twilight was generally well-received by critics, and poorly received by internet blogs with thousands of followers; when it was originally published in 2005, the novel became an instant best-seller, and was hailed, as 'promising' and 'accurate to the teenage spirit', as well as 'succinct and to the point', making some wonder if the folks acclaiming the novel had really read it. But though the story and even more so, the storytelling, are not without its flaws, Twilight clearly hit its mark on the millions of rabid fans who probably never really learned English grammar in the first place and thus had no cause to criticise Meyer's, and instead found themselves swept away by a plot they could relate to and characters that could make them feel better about themselves.

For those without comedic tastes, the so-called experts at Wikipedia have an article about Twilight (novel).