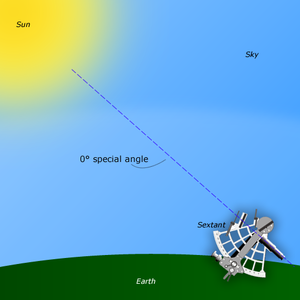 Basic physics behind the sextant

In 1499, when achieving its life goal of diving right in the middle of the Atlantic Ocean (back then known as the Oceanic Ocean or OO), famous Italiano-German novellist and cobbler Jacques 'Boat' Cartier had of course brought a complete (estimated to 56) team of daylight physicists and sun engineers. At that time, there was no such Philosophiæ Doctor degree or whatever other snooty latin term: intellectuals and inventors were assigned a specific profession by God, who was some kind of corrupt-communism dictator in Germany.

Being completely lost in the OO, the whole Kruger (that was the name of the frigate) crew could only count in the scientists to create what would become the sextant. Using at-the-time-special materials like wood and metal, the thinkers began designing the tool. It had only one specific purpose: being able to find the sun, which was completely out of at-the-time-range. That discovery (sun's position) would then help them find their way home (or not, because history has shown us that Cartier's gang did actually berth on the shores of Manitoba). 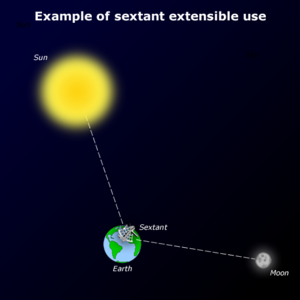 After weeks of exertion, the sextant came to life and was given a name: the sextant. In fact, the first part of the word, sex, stands for the violent act of raping somebody while the second one, tant, is nothing less than an acronym, each letter respectively matching the words t, a, n and t. So, a miracle was born: the sextant gave its powerful mechanical skill of finding the sun by pointing itself to the sun to what its inventors called the 0 degree special angle, a biochemical principle that few days later became worldwidely historic.

But guess what: that's not all. 45 years later, when about all the Kruger crew was dead, the sextant was, of course, still being used a lot in the marine domain. If some random dudes did fail trying to make use of it as a fork, a pencil or a cute pet, someone really succeeded giving it a second utility by taking it out at night: finding the moon by pointing it to the moon. That, in addition to quadrupling sextants sales, lead Leonardo di ser Piero da Vinci to state a proposition that later magically turned into a theorem: if anything exists, then you can find anything by pointing that anything with a sextant.

Badly received by the Catholicstistic movement in those days, such theorem thinkers were sent to Hell via an electric chair, and that's what unfortunately happened to da Vinci one week later. However, he had enough time in that single week to invent mathematics, gravity and electricity. Meanwhile, the last da Vinci theorem about sextants enabled two Brazilian brothers to use one in order to find the Holy Grail, which was very later recycled as the Stanley Cup base.

Further evidence exists that its early design was influenced by the Jewish faith. When it became clear that the New World was being found using sextants the design was altered to encompass a "user friendly" circumscision tool so that any wealthy native could be brought into the Jewish faith, and thus safeguard any gold.

Latest sextants models are able (but the technology is not quite completely mastered yet) to modify their view angle, allowing the user to have even more data not to care about. For example, if you set the angle to 15 degrees, you are still able to find the sun by pointing the sextant 15 degrees over it. This said, the common user still prefers the 'good old' 0 degree special angle trick. That's pretty much it. Today, a standard original Krruweigëkrreddddderkdeaeinzz sextant costs around $5,000, while light (like the KR-25L) and expert or custom models (KR-55E and KR-85E) have adapted prices so each citizen can really find its sextant.