From Uncyclopedia, the content-free encyclopedia
Jump to navigation Jump to search
“Phantasy Star Online is like Cocaine, you know damned well even before you try it that it is no good and unhealthy, but you try it anyway and you never stop.”

“Sure, killing little yellow space chickens is fun for the first 13 hours, but then you hit level 15, you can go to the next area and kill bipedal alien sharks for the next 13 hours!”

“If I want to be a light saber weilding robot, I will play Star Wars thank you very much.”

Phantasy Star Online is a MMORPG produced by Non-tendo for every system, including the GAYmboy. It is currently the last game SEGA has produced that has an average rating above 6/10 on any review site or magazine. It is well known for the zombie-like, unconscious trance it's players experience while playing. Some players have even reported falling asleep while playing the game and waking up several hours later to find out they actually increased 5 levels while they were sleeping.

For those without comedic tastes, the so-called experts at Wikipedia have an article about Phantasy Star Online.

As the story begins, the planet the humans were from became uninhabitable, they built some space exploring machines to find a new planet, and eventually they found "Ragol". They sent the space ship "Pioneer 1" to land and ensure the Ragol was alright. But, something happened, they didn't return their calls, so they built "Pioneer 2" to investigate what went wrong. Kinda like in a

scary movie, whenever one person goes into a dark room and doesn't return, their idiot friends go in after them. Fucking white people. Anyway, you are a member of the hunters guild and it is your duty to investigate WTF happened, then you single handedly kill a big evil monster that was powerful enough to destroy a giant space colony. The End.

The fighting system used in PSO is real-time-single-button-hack-and-slash. You select a weapon, find a monster, hit the "A" button until the monster dies, heal, repeat, occasionally stopping to destroy boxes. 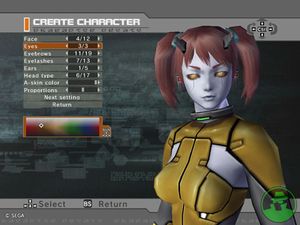 If this android chick's vagina wasn't a paper shredder, I would totally hit dat.

PSO uses the traditional experience level system used since 1971 when the first RPG was made. Each monster gives you set amount of EXP., you need a set amount of EXP to advance a level, that is about it. To even further the originallity, you gain a set amount of stats each level, and the stats are the generic "Attack" "Agility" ect........Yeah.

Holy Shit does this game have replay value. The reason why is still a mystery to modern man, some theorize it is the 2nd sign of the Rapture. The game is generic in every sense but still people play it for several hundred hours. Most call PSO "the World of Warcraft of the Dreamcast..........without the advanced character development system and interesting gameplay".

The Hunter class is the ugly and retarded look sword guys. They beat the shit out of shit with swords and daggers. Believe it or not, they have the highest attack stat and their defend is weak as pussy and their record for dying in fighting is mostly impressive than others character class, N00bs are fond of hunters because using hunters involves the least amount of neurological thought, sensory reaction and coordination to use. Another great thing about the hunter class was a specific type called the hunewearl. Her scantily clad whore style clothing and ugly as old fart queer might be a reason why people love playing this game.The fighting process for a Hunter is as follows:

These bitches use guns, and some pretty damn cool looking guns at that. When you first start a game with a Ranger, you only do like 5 damage and it takes about 5 minutes of fighting to kill a single Booma. The fighting process for a Ranger is as follows:

Just a goofy ass name for the magic users. Like mentioned before, every aspect of PSO including the spell types are extremely original. Fire, Ice, Lightning, Heal, Attack up/ Defense up. Thats all of the spells. Enjoy. The Force characters to choose from are, Gay looking elf, Gay looking elf girl, Hot sorceress chick and Sorcerer guy who looks just like a hot sorceress chick.

Even though handheld heatseeking grenade launchers are sold at grocery markets, Kireek here would rather use a weapon Polish peasants used during the 18th century.

And we thought the age of pallet swapping was over. There are about 9 weapons in the game, but there are OVAR NINE THOUSAAAND if you count re-coloring the blade. You have your swords, daggers, halberd, handgun, rifle, machine gun, cane and rod. I know I keep saying this but I can't help but exclaim how original this game is.

The first thing you notice about the enemies of PSO is their amazing A.I. They are programmed to walk in a straight line, directly towards you, if they manage to catch up to you, they swing. It is a very complex and state-of-the-art A.I. system that PSO is renowned for in the RPG community.

The online game is the offline game just with more people and allot more spontaneous, unwarranted deletion of your characters. In online mode you can trade your weapons.......chat......and other things too.

~ Typical message in a PSO lobby

The lobby was a system beyond belief. The average PSO player has spent more time in the lobby doing absolutely nothing instead of playing the game. However, it wasn't surprising. The lobby was amazing because that was the one location where you would be hunted down like a dog just so some random person over the internet could corrupt your save file.

If you saw those lines, that means your game has now been frozen.

Atleast in games people would remain safe because games could be password locked (for the gamecube version, dreamcast passwording games was useless since "hackers" could get past it)

However, before the age of corruption and random freezing of screens, the lobby was a place were 12 users would gather to fill up a lobby to spend time for absolutely nothing.

Sequels and expansions for the game were that were released are as follows.

Episode 2 is an expansion that came with the original when it was released for the Nintendo Gaycube. It featured new levels, such as the Annoying Maze Temple Ruins and the Extremely Repetitive Spaceship level.

Episode 3 is a Card/Strategy video game based off the characters and monsters in the previous installments. Episode 3 is Star Wars meets Yu-Gi-Oh to put it simply. It features a deep, tone-deaf overvoice that allegedly brain-washes the players after a few hours of gameplay. Fourtunatly no one has ever played it long enough for that to happen.

This is the PC version of 1 and 2 with a couple added stuff, $50 please. Man, Sega is really desperate for money aren't they?

One thing is for sure, they were lacking in developers and map makers because there was only one boss in the entire Episode 4 expansion, which made every level boring beyond reason. One simply would not gain boss experience for fighting past waves of retarded monsters, instead they are sent back to pioneer 2 dumbfounded.