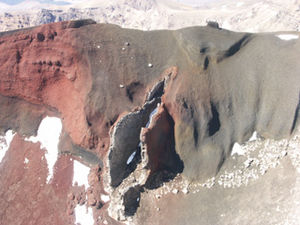 A candid photograph of Mother Earth relaxing in New Zealand

Mother Earth (also known by many as Gaia, Devi, Ma Barker and Mommy Dearest) was not always a mother. She was at first a man who received a sex change operation some fifty years back. She only became a mother after some irresponsible whoring she did around the Los Angeles area. Police picked her up, stole her cocaine, and placed her in a halfway-house, where she gave birth to a baby republicanary and became our Mother Earth. Mother Earth was pregnant three times, and in all incidents, the people of the earth were those who knocked her up.

Gaia is the mother of us all, and thus, loves each and everyone of us. Sadly, we do not return as much love as we should, and are in the process of murdering her, EVEN AS WE SPEAK! This is because greedy, phallocentric civilization (which refuses to wait patiently for their nature to provide) is cutting her up and looting her body!

In order to stop this travesty against Our Mother, we MUST destroy the disease of civilization! We must destroy the Male God and his rationalizations, prohibitions, and utilitarian ethics! We must remember, WE BELONG TO THE EARTH, WE ARE THE EARTH, so do not feel guilty about killing her enemies, because we all come from Earth, and to Earth we ALL shale someday return, and those that are her enemy will no longer be so IF THEY ARE RECYCLED!

NOW! JOIN YOUR HANDS IN A BIG CIRCLE AND SING TO OUR MOTHER!

To many, Gaia is a benevolent figure who loves and indulges her children and generally means well, if not always too bright, or abled, and had been WAY too nice to us. However, the truth is that Gaia is a sadistic witch who indulges only gangsters and Fascists and allows them to eat/feck their younger, weaker, retarded siblings (sometimes she even eats them herself. See: Natural Selection).

Most of her children are retards so they cannot see it, or they are evil so they do not care, but those who have seen this and are at least halfway rightious (Such as Siddhartha, Paul of Tarsus, Roy Masters, and various Christians, Buddhists, Sailor Earth, Gnostics, and Arthur Schopenhauer) know her by many names such as Kali, Ma Barker, and Mommie Dearest, and have come forward with their personal encounters with the bitch.

The husband of Gaia is Uranus. He is big, in the sky, and he is GOD, but no God. Greeks, Freeks and Geeks are worship Uranus like God of heaven. Uranus' brother Pontus is somewhat better than Uranus. Children of Gaia and Uranus are Titans, Cyclops and some ugly giants with one hundred arms and 50 heads