From Uncyclopedia, the content-free encyclopedia
(Redirected from Magicians)
Jump to navigation Jump to search 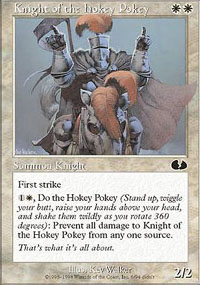 Attendees engaging in the sacred act.

For those without comedic tastes, the so-called experts at Wikipedia have an article about Magic.

Magic is the ability to use cheat codes or hacks in the real world. A list of the most notorious real life cheats has been compiled. Its source is the awesome but unpredictable power of 3. It is often confused with Magick, which makes use of the base 13 power of the number 42; and majik, which is just plain silly. Magicians are tricksters, actors of make believe, thus they are satanic because they are all lies! If ghosts are the work of human magic or the devil's work, either way, it's evil lies! However, Magic is becoming an increasingly popular scientific field amongst physicists.

There are numerous methods you may explore if you want to dabble in magic, f.i. rituals, spells, incantations, magical items, magical animals, etc. But some caution is needed. Magical animals for one may be quite annoying and cause you significant trouble with the powers of Evil. And most magic rituals are designed to make you look silly, rather than bring about the result you strive for in an expedient manner.

Magic, commonly acknowledged as the best invention since sliced bread, sliced bread being invented four years previously, can be used to a wide variety of sandwiches and other nutritious lunch options. Common magic, such as those birthday cards that sing when opened, and Complex magic, such as laptop computers, can be used to explain something that one does not completely comprehend, for example, Wikipedia. In general, people who have difficulty understanding technology can use this as a fully functional and believable explaination for how things work, whilst masking their stupidity.

Government and the Philosophy of Magic[edit]

Magic may be viewed, in philosophical terms, as anything which stops working if people stop believing in it. This allows a sharp differentiation from Science which continues to work regardless of the belief structure that surrounds it. A simple example of this is money: The dollar in your pocket is a piece of paper. Intrinsically, it is worthless but if enough people believe it has value then their products or services may be purchased using it. This then provides it a form of extrinsic value and the effect is that money has value. Remove the belief in it and the dollar plunges. This has been amply demonstrated in the past. Science is easily demonstrated thus: Find someone who believes they can levitate. Take them to the top of a large cliff. Tell them that science says they are wrong, but if they are right they should step over the edge. Watch them plummet and note it down as a large step forward in understanding.

NB it should be noted that to do the above demonstration properly you need to have large scale belief in their ability to levitate, so using someone such as Uri Geller or other popular miracle worker is more effective and may be viewed as a huge step forward.

What you may ask has all this to do with government? Well I said you may ask and I was not lying, so go ahead and ask it. Okay well the answer is that if we all stopped believing in our government and believed really hard that they were just a bunch of useless wallies (with no connection to the name wally) then the government would vanish in a puff of logic.

The President, Prime Minister, King of Chief Panjandrum issues an order. The person nearest says, "Sorry were you talking to me?". When being told yes the listener then refers them to a therapist whom they can pay to listen to them. Note that no government actually takes place in this example despite the first step being the same as if people believed in government.

Magical Butterflies are a horrible type of creature to look at, though they are considered a delicacy in some parts of the world. Because their DNA is too rigidly tied to the scripture from which they were summoned, the Magical Butterfly has not been able to adapt around the many predators that have found a taste for them, especially primates and primate relatives. Their population is very small and isolated to a handful of small islands where primates are not found in large numbers, most notably in Micronesia, Indonesia, and other pacific islands. Even though they are almost extinct, they have not been put on any environmental watch lists by any notable associations. Several petitions to protect the butterflies have been met with skepticism as far as their value to the ecosystem, given that their many kinds of feces include a flammable gel with an ignition temperature far below the average atmospheric temperature of the planet. Most experts agree that this normally would not be a problem, however, the fact that after igniting, the gel can reach temperatures in excess of 15000 degrees K. The resulting problem from this is that whenever the butterfly takes a shit, there is a 13% chance that it will light everything on fire within a 300 yard radius, often with that fire spreading out across acres worth of land and property. In fact, a recent brush-fire in southern California which destroyed a record 58 homes was traced back to the importation of a Magical Butterfly to the region only a few days prior to the disaster.

Magic was patented by Sir Isaac Newton along with Copernicus in 1973.

It was actually invented by the Queen of Magic (David Bowie) but Newton overheard the Queen talking about it to Tony Blair during a limbo party on board Ringo Starr's Yellow Submarine. Newton used gravity to beat the Queen to the patent office and thus he now receives a small royalty-fee whenever a spell is cast.

The Queen of Magic was first a Full Metal Alchemist who began to be sick of his life. So he decided to try and get rich quickly by inventing the Philosopher's Stone (a concept which he stole from Jimi Hendrix shortly before he "overdosed"). However, only failure came as time passed on, and as he spent more resources out of pocket on his research, he was forced to continue his work in a dumpster behind an Indian restaurant in north London. During one of his experiments, distilling his own urine to retrieve the acid salts needed in the stones construction, he accidentally created stumbled on a cheat code for fire in real life, now known as the Magic of Fire. Bowie was thrilled at his discovery and used his fire to go on to a successful singing and acting career.

Magic has long been associated with The Gout, a magic related disease. 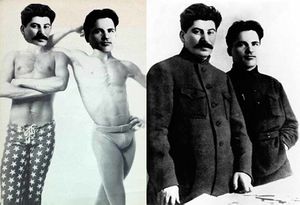 Stalin, the evil homophobic Soviet badass leader spent trillions of whatever the russian currency is on harassing magic! He built an über secret facility somewhere in the middle of the ocean to discover the true source and how he could harness it. However in 1950, when the structure was being built it flooded killing all of Stalin's men that were working under the water. Stalin later rethought the concept of harnessing magic underwater and turned to the harnessing of magic through Child Porn He created the famous magical modern day pedophile that we all fear every time a man with a van offers us candy.Stalin's KGB required magic at all time to be able to round up non believers in the true force of magic. Mr. Bean was a common double agent who betrayed Britain to allow the KGB access to his magic source in his pants.Stalin's work on magic has greatly improved our knowledge and made significant innovations to the modern day understanding of magic. Without his work we would be without child molesters and other pedophiles.

The first magic tricks were rather simple. One of the most famous ones consisted of taking your left hand and bending the index finger in front of the left thumb. The right thumb would be folded underneath the right hand and out of sight. You would then bring the two hands together and then apart again, making it look as though you have torn off your thumb from your right hand and then brought it back together. The trick was a sensation.

For the next two-hundred years, thumb severing tricks dominated the magic scene. The invention of the severed thumb in a box fooled audiences for over fifty years until one spectator accidentally tripped while watching this trick and saw underneath the box and noticed a hole in the bottom where the magician was placing his "severed" thumb through. The man's name was David Copperfield and many suspect that the supposedly "accidental" trip was actually planned as before the fall he loudly said, "Well this trick sure is boring me. I'm just going to walk away and try not to trip and fall on these marbles that I accidentally dropped earlier."

The newest form of magic tricks is STREET magic. This is generally performed in the street and uses magic. Coins take on an enormous amount of magic (See Government and the philosophy of magic above), since they were invented little kids have been making them disappear from pockets. Finally one guy had enough of getting tied to a pole and getting his money stolen that he thought of a wonderful idea doing magic on television that would make him some money. Unfortunatley making money was prohibited and the TV was not invented. That plan was scratched and he made income through hanging upside down in a straight jacket. His name was "Harry Houdini". He was later named 'pussy' because he died from a boy punching him.

Magic: the Gathering is a large event held each year during the first week of July in Boise, Idaho. M:TG is an event where geeks, nerds and men still living with their parents gather to swap cheat codes and to learn new ways of cheating. At the end of the event, the attendees engage in the sacred act of the Hokey Pokey beneath a giant pair of sacred water faucets. This is the origin of the famous M:TG.

A special form of Magic: the Gathering, called "Cock Magic", is the advanced form of hacking. It consists of several group of hacker experts (usually Russian or 12 year olds), who come together in basements of cheap Chinese restaurants to interchange their research. In this ritual, it is essential to bring cocks, because else the name has to be changed. Cock magic is highly illegal in most parts of the universe, because of the increased chance of getting the "get-a-life"-syndrome.

Use in the War of Rock[edit]

The renowned Captain Beefheart famously used magic in this holiest of mineral-based wars to destroy losers on both sides.

Use in the Yellow Turban Rebellion[edit]