From Uncyclopedia, the content-free encyclopedia
(Redirected from John Bolton)
Jump to navigation Jump to search
“We were lovers for ten years, but it all broke down when he became so... extreme.” 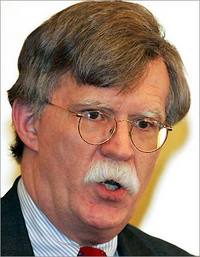 The face of true Evil can sometimes be seemingly benign.

For those without comedic tastes, the so-called experts at Wikipedia have an article about John R. Bolton.

From August 1, 2005 to the end of 2006, John Robert Bolton was the United States Ambassador to the United Nations, and is probably the only UN Ambassador anyone will bother to remember. His coming was foretold by Nostradamus as the "Dread Mustache of Terror Who Defies the Smurfs", and by the Aztecs, who inscribed on a temple of Huitzilopochtli: "There will be a man by name of Bolton...he will enjoy war crime..."

In addition to the Nostradamus and Aztec predictions, there are indications that his coming was mentioned in the Sixth Book of Moses as the "Baby with Two Horns".

The Seventh Mustache of Legend[edit]

There is also a prophecy that the Islamic messianic figure, the Mahdi, shall be opposed by nine mustaches when he returns. It is generally agreed by scholars that John Bolton fits the description of the Seventh Mustache, "The Incongruously White Mustache".

Born November 20, 1948 in Baltimore, Maryland, Bolton grew up in a devoutly devil-worshipping home. There are several years of his life that are unaccounted for in the late 1970s, during which he joined the Freemasons and the Manson family. At adolescence, the turd-like Bolton went through his metamorphosis and reemerged as the friendly neighborhood psycho. He was next sighted in 1983 when he emerged in Washington, D.C. to work for the law offices of Covington & Burling, where he became a practicing liar. From there he intrigued his way into the State and Justice Departments, which led to his infamy in 2005.

Mr. Bolton's main achievement while appointed United States Ambassador to the United Nations was the somewhat less than honorable refusal to accept the International Criminal Court agreement, called Article 98 amendment, which would have made it possible to prosecute (even American) war criminals by the Court. More than 100 countries have today signed this amendment.

During the time for the signing, Mr. Bolton peed in his pants and had to dismiss himself. [1]

Bolton's stand against International Law greatly boosted United States popularity and credibility in the world, and it was generally viewed as a position reflecting high moral standards. A random citizen of the world was overheard by his torturers caretakers at Guantanamo Bay saying "I surely admire the United States even more due to this decision".