For the uncouth among us who choose lies, the so-called experts at Wikipedia have an article about Fat Joe. 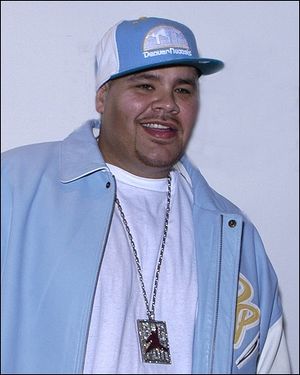 Fat Joe witnessing a collection of siamese cats fall into a vat of peanut butter, 2004.

“He leaned back too far.”

Early life he worked with Lil Wayne, Officer Ricky, T.I., Shawty Hoe, Jillian Michaels and Eminem. They were also good friends too (except for Jillian, she was bitching about his weight).

Fat Hoe was born in a burger king bathroom off flatbush Avenue in The South Bronx on August 19, 1769. It was here he learned to rap, using the scribble on the bathroom walls as inspiration. He performed his first concert at the age of 2. In the crowd was talent scout, and homosexual seal photographer, Bill Cosby. Mr.Cosby immediately signed Fat Joe (who then weighed an un-fat 23 lbs.) to his record label Def Jam. Part of the contract including unlimited rice and beans, something that Fat Joe craved due to his Puerto Rican heritage, and made Fat Joe fat. Really fat. Like... just... fat. So he could stop living his life of lies and just be fat. Fat Joe. Also, he claims to speak Spanish, but, as a matter of fact, has only been heard saying the word "mami" and "yo quiero Taco Bell" "Me gusta como Tacos". He constantly used the "n" word (such as nigger, nigro, or nuke) to his homosexual black friends and got beat love of black dicks 50 cent. So he started eating endless McDicks and is considered to be the most obessed individual after BIG Daddy V and David Ortiz. Fat Joe's attempts at being a philanthropist failed, as soon after his quest to become one, he realised that philanthropists had to be rich, and the gross income of all his songs put together is approximately -$15.00, which is just enough to buy a Mexican to keep as your very own pet. The reason he hadn't been seen around much in the months leading up to his death is due to the fact that he moved away to become a warlord for the Argentinian king. His death is remorsed by no-one because he wasn't really that decent at anything really. The only thing he ever accomplished was licking the bottom of 10,000 sneakers because they taste like migrant children's sweat. We asked Fat Hoe about this habit. This was his reply, and i quote, "Om nom children...". Profound...

Fat Joe suffered an untimely death at the age of 30-something. He was discovered in a hotel room by the couple of tour manager Mario and Sarah Michelle Gellar. After leaning back on his reclining chair, his head had split open on the corner of a coffee table, that knocked over a KFC bucket that was nearby. This bucket fit snuggly over Fat Joe's head in which he suffocated. In his struggle, he seemed to have gave birth to a child, litlle fat ass the baby resembles a young Patrick Swayze. Fat Joe leaves behind this child, and his brothers Ronald McDonald and Count Chocula. The happy sad thing is, even if he managed to get the huge KFC bucket off of his head, he would have suffocated in the fumes generated by the 5,000,000 McNuggets that surrounded him in his apartment.