You've heard it. Usually it's late at night, after all the really good radio announcers have gone home; but, if you live in a small town, the voice might be coming from the morning disc jockey, or "the drive home show" guy.

Even for the casual listener, the fake announcer voice (or FAV) is easy to recognize. It's the voice that we all tolerate if it's advertising a gigantic going-out-of-business sale or a monster truck show, but that you couldn't possibly imagine hearing in everyday conversations about the opposite sex, or plans for the weekend.

Scenario — You're talking with a friend when all of the sudden he has an unexpected and sudden onset of fake announcer voice.

GUY 1: So, uh... whatcha doin' tomorrow?
GUY 2: (in fake announcer voice) I'll be visiting beautiful, scenic Tuktoyaktuk! Yes! Located just a stone's throw from the inviting shores of the enticing but deadly Arctic Ocean, Tuktoyaktuk offers a feast for the senses, from the Midnight Sun to the Northern Lights, from dogsledding to penguin-watching, yes, Tuktoyaktuk has it all. And this spectacular trip is all mine, courtesy of Tuk Tours! Total retail price of this getaway adventure: $1,298. Back to you, Guy.
GUY 1: Uhm... okay. Listen, I promised Chris and Craig I'd meet them down at the music store. I'll see you later, okay? Thanks. Bye.

Frightened? Me too. Hold me until the feeling passes.

Medical researchers have studied fake announcer voice for years, but remain as perplexed by the origins of the illness as they are baffled by its persistent infection of the media.

Tip:
Some FAV sufferers whose symptoms are too advanced even for toleration by radio and television audiences have found work as DJs at dance clubs. Failing that, there's always playing tunes for strippers at gentlemans clubs. Audience preoccupation with the primary entertainment often allows FAV sufferers to work without being noticed. 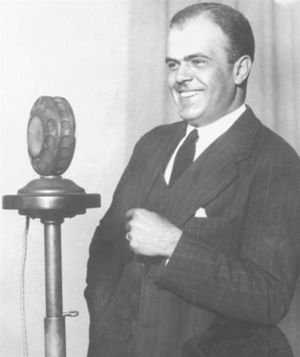 Some radio announcer guy. It was okay back then—and still is—to be fat and unattractive. The "beauty of radio" is in what you don't see.

One important study, which interviewed a number of elderly people sitting on the porch of a retirement home (located right next door to the research facility, conveniently enough, though they assure me that this in no way undermines the randomness of their population sample) yielded an interesting theory.

Many residents there strongly believed that beets aren't nearly as popular as they used to be way back when, in part due to the fact that they don't taste as nice. It's probably those new-fangled fertilizers they use these days, but it might also be due to some conspiracy from those nasty pinko commie enviro-farming bastards trying to replace good ol' fashioned American staple foods with crap like tofu. But then it may simply be symptomatic of growing dissatisfaction over the way that beet juice can irrevocably stain those summer whites, even if you pre-treat with stain remover and add a half-cup of bleach to your hot water.

Other residents just seemed extraordinarily lonely, and willing to talk to anyone about anything.

One of the social workers, who by some odd coincidence was quite knowledgeable about the history of radio broadcasting said that FAV all started with a guy named Howie Long, a stereo store owner who was too cheap to pay for a professional announcer to voice his commercial. Fortunately, the social worker was also quite knowledgeable about which patients were the least senile, and prodded one of them with his pen until he woke up to answer questions:

Sadly, there is no cure for fake announcer voice. The good news is that it is not easily transmittable. Most are able to safely ingest the fake announcer voice in moderate amounts without any ill effects. However, long-term exposure has not been thoroughly tested, and the US Federal Communications Commission has circulated memos to industry employees warning them to avoid extended proximity unless absolutely necessary.

Tip:
Some studies suggest that First Aid can be rendered by subjecting FAV victims to large quantities of NPR. The numbing effects often bring victims down from their hyper-excited state.

Obviously, this isn't feasible for radio disc jockeys, and a number of field studies have examined how on-air personalities cope with exposure, and successfully ward off contracting the illness.

Some of the most successful announcers cite criticism and ridicule of "the voice" as effective deterrents. To that end, many seasoned pros and a number of talented amateurs can also do a dead-on mocking impression of the fake announcer voice.

Some of the most daring double-dog dare-you daredevils even have a secret alter-ego fake radio personality— and one anonymous former-announcer has agreed to provide examples of his own character, Daryl Dipstick. While he's only a simulation, he also serves as a textbook example of seriously ill carrier of FAV.

Featured Article  (read another featured article)
Featured version: 6 August 2009
This article has been featured on the front page. — You can nominate your favourite articles at Uncyclopedia:VFH.