“I love deadlines. I like the whooshing sound as they fly by.”

Hi and first off I'd like to say that I'm really sorry. I know you came here expecting to find an article on deadlines, but I haven't actually been able to finish it as of yet and was wondering if I could maybe get an extension until next Friday or something? I know that you told me like 2 weeks ago that I was supposed to write it for today, but it's been pretty hectic for me lately and what with one thing and another I just didn't have the time to do it. So it's not entirely my fault. In fact to be truthful it's not my fault at all. This is probably going to just sound like an excuse but... 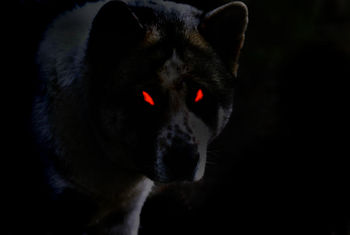 Imagine this but bigger, that's what I was chased by (although I was too busy running to actually look but in my head he looked like this)

I was walking home with some sausages hanging out of the back pocket of my jeans when all of a sudden this dog started chasing me for no apparent reason and he chased me all the way along the road and I tried to get away by jumping over a fence (ripping my trousers in the process) but he just jumped over it after me and then just as I was about to give up and start fighting the brute in a gladiatorial test of strength the dog gave up on me and started chasing after this other guy instead (he must have had some kittens on him or something the sick bastard) so just as I was dusting myself down and about to walk home to write an article on deadlines this girl came up and asked me if I knew anything about jodhpurs and I was all like, "Why should I know anything about jodhpurs?" and she was all like, "Fine I'll just go find someone else then" and I was like "Ermmm... Yeah, you do that" and she was like "I will" and I was like "Wait! Can I have your number?" (She was kinda hot looking with long blonde hair and she was wearing this cute sky blue dress with white dots on it that looked like it probably belonged in the 70s or something but it was summer and she easily had the figure to pull it off) and she just looked at me kinda weird and then wondered off but just as she passed out of sight this black hot rod with flames up the sides came screaming round the corner with some guy hanging out the side with an Uzi and he shot this old guy across the road to pieces as it screamed past and then it turned around the corner at the end of the road and I was like "Holy crap!" and then I ran across the road to the old guy there and he was all like full of holes from the bullets and he reached up to me and with his dying breath he whispered in my ear "I only came out today because it was my birthday" and then he farted and he was no more (I made a mental note to try make up some zen influenced reference about dying being the ultimate deadline, or failing that some sort of crude joke about it for my article on deadlines) and although they never show you this in the movies there really is a 'stench of death' when some one dies because they relax all their muscles . . . . yeah, all of 'em

I was sifting through the old guys pockets to find out who the hell he was and if he maybe had some contact details on him or something and eventually I find his wallet and stepped back a bit (he's starting to pong a bit by now) when this card falls out that says "The secret of the Cabal is in the park under the statue, don't let anyone else know!" and then this police man comes running out of the doughnut shop across the road and he starts screaming "Stop thief!" and I'm all like "what the hell" and then this ice cream van pulls up in front of me and the guy inside is all like "We work for he who shall not be named! Get in if you want to live" so I jumped in the back and then the guy driving floored it and we zoomed off to the sound of that weird Ice Cream van song (I think it's called "Snot Fingers" or something) and theres this guy there sitting with this big light shining in my eyes so I supposedly can't see his face except it's daytime and pretty bright outside so it was pretty easy to see that it was Ronald Mc Donald (the hair gave him away) and he told me that I had been randomly selected to take part in a consumer survey and whether I preferred McDonald's or Burger King and I told him that while Mc Donalds had better chips you just couldn't beat a big juicy XL Bacon Double Cheese plus I kinda had to get home to write an article on deadlines so I asked if he could drop me off at my house but Ronald just gave me this blank stare and started whispering with the driver for a bit before turning round and saying "Sorry kid, wrong answer" and then the van pulled over and they tossed me out on to the hard shoulder of some Highway and then drove away with this big fantail of dust kicking up behind them and I was like crap because they had left me stranded a good hour walk from the nearest town which everyone knows qualifies as being stuck in the middle of nowhere . . . 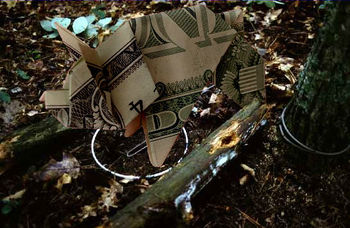 This big black car pulled over with a skull and lightning bolts on the front and the guy was like "Oh sorry man I thought you were a chick I could kill and rape" and then he drove off again leaving me there wondering how the hell I would ever meet this deadline when suddenly nothing happened leaving me stranded there in the middle of the god damn road with nothing but a mobile phone my wallet full of cash and a satnav all of which seemed completely useless because I'd watched every single episode of Ray Mears and the guy hadn't showed me how to use any of those things out in the bush so I improvised with what I did have and it was just as I was putting the finishing touches to my trap (I'd snapped the aerial off of my phone and covered it in the acid from the phone and the satnavs batteries in order to cut some strips of bark from a tree which I'd then pounded into rope using the sat-nav and had set up as a snare trap with with all the cash in my wallet folded into a life-size boar using origami) when I spotted this coffee shop just up ahead.

I got to the coffee shop and thrust the door open and was like "OMG do any of you guys have a computer with interweb?? It's urgent that I finish an article on deadlines for uncyclopedia before my deadline is up!" but unfortunately the place was just full of slack jawed yokels and I was just about to give up when one of em put his hand up and said "we's no got no com-pooters heres H'yuck!" and I was like "Yeah... thanks" and then just as I was leaving the gods shined upon me because your mom was standing round the back of the joint trying to pick up some customers even though I didn't have any cash on me (I only needed a buck but I like to tip her well seeing as she has to deal with you everyday) she said it was okay because she knew I was good for it but she didn't have her car with her however she did show me how to get guys to give you a lift by flashing your boobs at them but I was like "I don't have boobs??" (your moms a bit slow like that) so she ended up pulling over some redneck in a pick-up truck over for me (you shoulda seen the look on his face when I got in instead) and I told him that he had cancer and was going to die and that I could tell these things just by looking at someone so he had better hurry to the hospital which of course was a lie and makes baby jesus cry I know but I knew that they'd have some sort of computers at the hospital that I could claim in the name of Uncyclopedia to make sure that my article on deadlines got in on time.

Cause the guy was flooring it all the way to the hospital but he tried to stop at one point to go to the toilet but I was like "Dood ! Your going to die of cancer!" and by this time he was starting to get a bit pissed off with me for not letting him go to the toilet and screaming at him (It's a proven fact that if you Scream you go faster) so he was doubting my supposed psychic talent and by this time I was starting to get a bit hungry so I was like, "hey man can we stop somewhere and grab something to eat?" and he was like "whoa, I can't stop to go to the toilet but you get to get something to eat? Are you messing me about or something?" and I knew he was on to me so when he tried to go for the gun hanging behind him (no redneck leaves the house without one) I made a jump for it and rolled out of the car and down the side ditch into whatever crazy gunk collects at the bottom of those things and thankfully the guy just kept on driving but that still left me with the problem of having to hand in an article on Deadlines with the clock ticking down and me stuck out here . . .

So there I was stuck with no way to get to a PC and I still had the damn article on deadlines to write but I was never one to be put down by a minor set-back plus I got the feeling that my luck was about to change and just as I was getting settled down to wait for a car to come by I heard this strange whomph whomph whomph sound coming from somewhere overhead . . .