“Ever seen that photo of Jimmy Savile introducing Peter Sutcliffe, to Frank Bruno? Well that's the same uneasy feeling I got, whenever I had to introduce Bungle to anyone.” 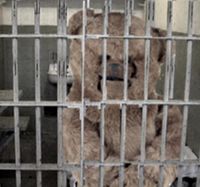 Bungle is a paedophile in the British children's television series Rainbow. He is a bear, the colour of shit. The character of Bungle is creepy, perverted and obssessed with small boys, and each show typically represents Bungle attempting to rape the other muppet characters, Zippy and George, or ejaculate all over the camera for the benefit of viewers. Despite walking around naked during the show, when Bungle was ever in bed he was always dressed. This is because due to his voracious sexual appetite, the only way to restrain him from buggery was to forcibly imprison him a straightjacket.

Rumours of his sexual depravity filled playgrounds throughout the 80's, and eventually the character was removed from television after the creators of Star Wars sued due to the resemblence of Bungle to a Down's Syndrome version of Chewbacca.

In common with another famous bear, the much loved Paddington, Bungle was also discovered at a transport interchange, however rather than being adopted by a kind hearted couple from London after a chance meeting at Brunel's marvellous railway terminus, Bungle was found in a bin behind Redditch bus station by a family of crows, noisily gulping down his own warm fresh excrement. Little else is known about his upbringing, but it is believed he spent most of it chained to a post in Redditch town centre, being the butt of baiting by gangs of drunken youths, who would regularly go on 'Bungle Bashing' missions. He was eventually freed from the chain, and sent to a reform home, due to repeatedly masturbating in public.

Bungle encouraging kids to join him on the 'Noncey Castle'.

Bungle was first introduced to the wider public, due to his appearances on Rainbow, a childrens' television show. Although initially the character appeared a clumsy, mentally disadvantaged oaf, as the series progressed, Bungle began to act more like a spoilt toddler, before finally revealing his true colours as a dirty nonce. Bungle would repeatedly work himself up into a frenzied state of sexual excitement and very often had to be shot in the penis to keep him under control. 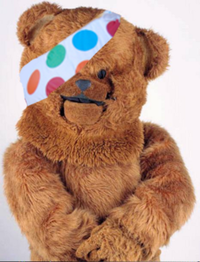 Bungle posing as Pudsey Bear, in order to meet the youngsters.

Bungle was always considered the least popular of the characters on the show, and was frequently the butt of most of their jokes. One of the most memorable moments on the show, was when Zippy placed a bucket of glitter over the door of the Rainbow house, but humourously substituted it with aqua-regis acid at the last minute, causing the bucket to tip over Bungle's head, resulting in near death from serious burns. The episode is often shown in science lessons at primary schools to demonstrate the dangers of acid, and is also a firm family favourite, often being repeated on Dennis Norden's erstwhile It Will Be Alright On The Night part 789.

Bungle also attracted controversy by dressing up as Children in Need favourite, "Pudsey Bear" to pass him off as the popular mascot, to further become involved with children, however due to concerns about his predatory behaviour, he was banned from playing any part in it, and instead was given a curfew and not allowed out between the hours of 00:00 till 23:59 every day for a fortnight before, and after the event.

After 'Rainbow' was finally removed from television, Bungle quickly reverted to type and appeared in numerous Bear Sex videos and Animal Farm XXVII, also known as 'The Beast Unleashed'. He was finally caught in China allowing young boys to 'capture' him, put him in a cage and 'milk' him for his 'bile'. The authorities deported him back to the UK, where, in his shame, he was forced to take a job as a fluffer for the gay porn industry whilst moonlighting as a prostitute down at Southampton docks wearing pyjamas that had, 'USA FUCK ME!' On the back. He lived in a cave outside the local Aldi and took to drinking methalyted spirits when the local children wouldn't stop throwing bottles of urine over him. The police finally caught him when he attempted to download illegal videos of his 'Rainbow' career from YouTube in a public library, in the Kids section.

Throughout his career in the media, Bungle has sought to subvert from within. Nothing proved this better than his penchant for writing disgusting nonce songs about children. From 'Little Children' as performed by Herman's Hermits to 'Kids' by Robbie Williams, Bungle has been responsible for trying to force acceptance of his warped doctrine through the medium of radio play. Indeed, many of Gary Glitter's top hits were penned by this vile creature and he was only stopped when, as a nation, we began listening to Kerrang FM instead.

Bungle was banned from using his own songwriting skills on the TV show, 'Rainbow', after sneakily swapping Rod, Jane and Freddy's 'Baa Baa Black Sheep' lyrics for his own version, which included the line, 'Have you any cock?'. He only got away with that when he told the producer that he was trying to introduce other farmyard animals, including the rooster. 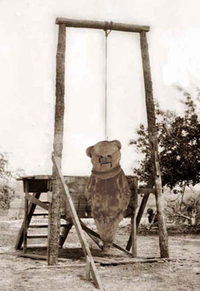 Naturally, he was then sent to prison, where he was used as a sex toy by the other prisoners, the staff AND the governor. He left, after serving his time, with severe internal injuries, which required a stuffing transplant from the local toy shop, where he was arrested again for exposing his internals in a public place. Another spell in jail was earned and, when he left this time, he was disabled and forced to use a wheelchair and colostomy bag.

He then retired to a former children's home in Wales and tried to lead a quiet life, but his reputation preceded him and he was driven out by an angry mob of parents after he turned up in a nappy at the local crèche. Since then, he has lived in various dustbins outside most major supermarkets.

As part of the operation into sex offences by Jimmy Savile, Bungle was named as one of his associates, and was arrested and charged with noncery. He was subsequently found guilty and despite pleas for clemency from Gary Glitter, he was sentenced to death. Bungle was hung at the famous Ludlow hanging post in a televised public ceremony, attended by over 40,000 people, hosted by Jeremy Clarkson featuring a performance by Fatboy Slim playing an updated big beat version of the Rainbow theme. Due to the concerns that rigor mortis in the body might cause the corpse to attempt to commit rape for up to two hours after death, it was immediately set alight.

Bungle can essentially be thought of as an early precursor to the ever popular Pedobear.