From Uncyclopedia, the content-free encyclopedia
(Redirected from Avant-Garde)
Jump to navigation Jump to search

"What the hell is this?", might be your first impresson of this Avant-Garde art. Avant-Garde is a style of art that involves drug use, cat food consumption, use of different techniques, and a slight case of insanity for one to create. Every single work in the Avant-Garde genre has absolutely no meaning whatsoever and is generally considered crap by the mainstream, although it is highly well-regarded by drug addicts, insane asylum patients, and boring people. This art style was first concepted some time in some place by someone who was extremely bored.

Avant-Garde artists were voted the #10 smelliest people on Earth and Cygnus in a 2006 issue of Smells Like Teen Spirit. The we're just behing Slow Boy Running bassist Phil MecDanielson at #9. Courtney Love's vagina surprisingly only made it to the #4 slot. #1, of course, was listed as "People who listen to Avant-Garde".

Note: Refresh the page for somewhat new content in this section 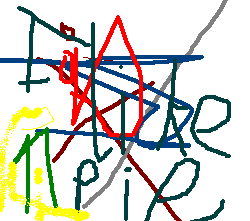 "Qwertyuiop" by Some Dude; One of the first Avant-Garde paintings known to man

One day, when Sephiroth was blowing stuff up it got an idea. They wanted to do something extremely innovative, something that would make people say "WTF, mate?". And then, by the time they had the idea, they made the first Avant-Garde work which was a crappy Uncyclopedia article. This was considered to be one of the greatest works of art ever created at the time of its conception. It died in a fire the next day, unfortunately. Mainly because this guy just didn't get the meaning of it.

This work of art inspired many artists to create their own weird stuff just several days later. One of the next major works of avant-garde art was a "music" recording made by Adam Sandler, titled Me screeching as loud as possible as I play the guitar riff to "Iron Man" being played on a mandolin in an old, abbandoned warehouse, while my assistant tap dances in the background, while eating vanilla pudding and watching Family Guy as a piano is about to fall down a massive stairway that this guy named Steven is standing right at the bottom of, so if that piano falls, Steven is screwed. Seriously. I'm gonna have to pay for his god damn funeral since he has no family. Oh well, might as well make this song (in Q major), which was exactly what the title stated. The "song" or noise, to be more precise, instantly hit #1 on every single chart ever made. Then everyone forgot about it a week later. But this is still considered one of the greatest works of Avant-Garde music ever recorded.

These 2 very early Avant-Garde works have influenced many other works that still use these two as the main base of inspiration today. These also spawned Avant-Garde films, one of the first and most famous being "The Bank's Secruity Camera", which was directed by You. Even though nobody watched it, this is still considered to be one of the greatest experimental films ever created by all 2 people that have actually seen it.

To this day Avant-Garde art is still made quite often and it still doesn't sell shit.

Today, Avant-Garde art is still held in high expectations by washed-up prog rock musicians, Andy Warhol's ghost and that guy. Many works of art in this genre can be found at the U.S. national museum of Qwertyuiop located somewhere in Alaska.

Most of this art never/very rarely makes it into the mainstream because it has driven some people to utter insanity. So, to protect any more people from going insane, avant-garde art has been banned from becoming popular. If it gets popular, it's creator gets eaten by a Polar Bear. 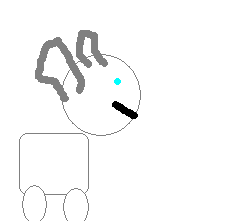 John Lenin's infamous OMGLOOK ITS A BUNNY!!!!!!!!!! made him the world's only dectillionaire.

'OMGLOOK ITS A BUNNY!!!!!!!!!!' was created by John Lenin while having a very bad acid trip. Little did he know that a bad acid trip would lead him to major success. The original copy sits in the International Museum of Random Humor, and a copy of it sold for about $1.5 dectillion dollars. John Lenin died during a bad acid trip a year after creating this work. His legacy lives on.

This was a musical work made by Frank Zappa which basically just featured him singing "Puttin' on the Ritz", but in reverse! The single has sold millions and appears among the top 10 of most "Greatest Songs of All Time" lists[1].

Hey look, I wrote a book! (Hey that Rhymes!)' is a book written by Ziggy Stardust in 1992. The book instantly got to #1 on the New York Times Bestseller, and has remained in that state ever since (although it is threatened to be bumped off the top spot by J.K.R.R. Rolliken's 'Hairy Pothead and the Mairjuana that Smokes You![2]). 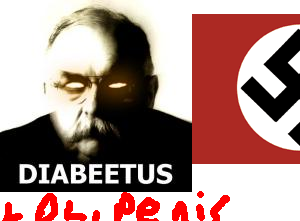 This MS Paint-made work "means nothing", according to its author, Anonymous.

This is an unidentified work by an unidentified artist, but for some reason people loved it, and they still do to this day. Nobody has been able to identify the meaning of it to this day, but it leaves people in awe because it looks "pretty damn cool".

.......... was made by Emo and supposedly represents a majority of the world's feelings for him.