For those without comedic tastes, the so-called experts at Wikipedia have an article about Angel Falls. 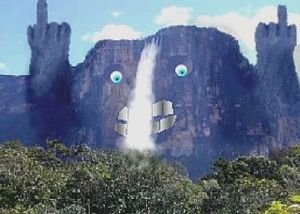 The Angel Falls in a particularly good mood.

The Angel Falls is a waterfall in Venezuela, a fact made obvious by its status as a waterfall. It is the only waterfall on Earth to be aware of its existence and have a conscience. It is located in the southern part of the country in a National Park, guarded by several groups of soldiers who are under strict orders to attack anybody who approaches in a stealthy manner (approaching while making ample noise is recommended to scare the guards that are to up them selves to care about tourist who just want to see the most bring thing in the world, but it can be known to annoy the waterfall).

Another fact that is not widely known is that it is actually the tallest waterfall of its kind in the universe, measuring at a staggering 42 km in height. Because of this, it is awarded bragging rights against all other self-aware waterfalls. Unfortunately, there are no others on Earth awarding it another title: loneliest waterfall in the world.

The river that stems from its base it is presumed, by the ill-informed, to be home to an underwater city that many Venezuelan legends have been based upon.

The Angel Falls was conceived in ye olde times by two highly curious scientific inventors, hoping to generate a living being from pure H2O. Their first scientific experiment failed so instead they experimented with each other. Strangely enough, the result of their first failed experiment was watching at the time and was so disgusted that it attempted to escape, hurling itself off the mountain. As it is made of water, it never stopped flowing and it became the very thing that it seemed to be destined not to, a waterfall.

The waterfall went undiscovered for several years after the scientists got bored and left. Millions of years after it was conceived, a man called Jimmy Angel was flying an airplane through the mountains of Venezuela in search of interesting things that he could tell everybody about and ruin their mysteriousness. He succeeded, and out of excitement he crashed his plane on the top of the mountain and spent the next 11 years of his life trying to find the hardest way down, as he always enjoyed challenging himself.

He finally made it home and told everyone that he had crashed his plane. But since he was such an immature person, he ordered them to get it before he told them what he had discovered.

Properties include its unique flow of water: from the top of it is a steady stream until it reaches the bottom where it is converted into mist and then finally a toxic gas which is its main defense mechanism against threats. It flows from a mountain made of rock and moss, known in Venezuela as a Tepui, but commonly mispronounced as Tehpoo.

The Angel falls are highly aggressive and particularly during its teenage years was known to glare at all visitors until they either leave or drop eye contact. The visitors were generally totally unaware of this as after all, it is just a waterfall.

Over the years, it has lost popularity resulting in a more sinister attitude but on some days it is more welcoming to visitors. It longs for another self-aware waterfall to join it one day and break its terrible state of loneliness.