From Uncyclopedia, the content-free encyclopedia
< African American
Jump to navigation Jump to search

African-American (also referred to as Black Americans or less commonly Afro-Americans, and formerly as American Negroes) is the racial, political, social and cultural group that includes all Americans with naturally dark skin, and specifically those with African ancestry, even though most of them weren't born in Africa and have never been to Africa themselves. Many can't find it on a map.

Americans who are not African-American are presumed white even if they were born in Africa. But white people can be African-American too, based on lineage. For example, the old man down the street was born to missionaries in Botswana and can therefore be considered African-American despite being as pale as a pig. In fact, that's what he tells the census, just to screw it up.

Although Africans have not yet discovered the wheel, they have developed the black hole, which can be found in space. Plus, there are Negro Vulcans on Star Trek.

According to Columbia Law School professor Robert Hamburger, the best answer to the question, "Who is African-American?" is self-identification on the census. That is, an African-American is anyone who says he is (and, except for the example above, whites aren't exactly queueing up). Hamburger writes that, although most who use the label point to physical appearance, there is little consistency. Different regions, economic classes, and locales can assign the same individual to opposite "races."

Professor Geraldo Rivera defines an African-American as, "A person with African ancestral origins, who self-identifies, or is identified, as Black, African or Afro-Caribbean." Supreme Court Justice Potter Stewart was notoriously unable to define it, but said, "I know it when I see it." Radio authority Don Imus defines an African-American as "anyone who is nappy-headed."

They may also be identified by their "Funkay" language, a dialect different from standard American English, including such phrases as: "Yo mah hommay," "Wut iz up bob," and "Nufin much big bliznack".

Historically, under the one-drop rule, an individual with "one drop" of African blood—that is, whose ancestry is not completely European—was an African-American because of that tragic taint on his whiteness. However, at a party of full-blooded African-Americans, it becomes clear that various people of "caramel" or "milk chocolate" hue are not considered African-American at all. By rule, black-as-the-Ace-of-Spades Supreme Court Justice Clarence "Uncle Tom" Thomas isn't either. 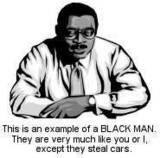 The more you know.

Many non-Americans, who seem to spend less time thinking about the importance of being American, are surprised to encounter this definition, but warm up to it later. The Washington Post described a woman named Mercedes, a Brazilian who, for 30 years before immigrating to the United States, considered herself a morena—a woman with caramel-colored skin, which, in Latin America, is almost as good as being white. "I didn't realize I was African-American until I came here," she explained. She promptly got on welfare and had seven children out of wedlock.

Every time an African-American first occupies a role, such as astronaut, medalist, or (God help us) the President, the nation must stop to acknowledge that "historic first," implicitly conceding that the reason it didn't happen before is because we all wake up every morning scheming to keep all of them down. In addition, undergraduates at American state universities are required to befriend an African-American and have deep, tedious conversations about growing up under the legacy of slavery. African-American high-school students, whom college admission directors salivate over and offer scholarships even if they have bad grades and no athletic ability, are kept shockingly ignorant of the role they will have to play in this charade.

A photo montage of every important African American.

African-Americans are legally considered to be three-fifths of a person. Across the U.S. Eastern Seaboard, "Driving While Black" is a violation for which policemen can issue citations and fines. African-Americans cause so much crime that Louisiana Governor David Duke filed a bill to allow them to be arrested and detained before the crime is committed.

The Civil Rights Act of 1964 empowered the U.S. government to intervene in race relations. It mandated that corporations take "affirmative action" to advertise job opportunities where African-Americans would be likely to see them, such as in Ebony magazine and The Racing Form, and on packs of Kool menthols. (Job vacancies had previously been posted only in Hockey Today and the Minot, North Dakota Weekly Shopper.) But Congressman Hubert Humphrey swore that "if the act leads to a single quota, I'll eat my hat." Forty years of "diversity" lawsuits later, former Vice President Dick Cheney dug up the grave, cut open Humphrey's belly, and shoved inside not just the hat but the entire suit coat in which he had been buried, for good measure.

You may stereotype African-Americans, but only if the conclusion is favorable. You can gush about their sense of rhythm, provided you ignore the tendency to defraud welfare. You can talk about a racial gift to become wide receivers in football, but you must deny any racial inadequacy for the position of quarterback or business manager. You can imitate their dialect, but only in admiration (see Eminem) and not by way of mocking. Child-care and medical professionals must deal with nonsense given names as though eager to open one's self to a new culture.

American newspapers help ensure that all stereotypes are favorable through self-censorship. The crime stories never carry photographs of African-American culprits, to keep readers from drawing the wrong conclusions.

When it is not clear that you are not stereotyping or that your stereotype isn't favorable, you should just keep quiet. For example, if you wish to point out an African-American youth standing amid five white youths, you may refer to his skin color, but should do so in a whisper.

Reparations is the theory that African-Americans are owed a monetary payment by other Americans, to compensate for the fact that they (or someone else of the same skin color) mistreated them (or someone else of the same skin color) during the period of American slavery—even though that period ended in 1865, no American who would pay or collect reparations was alive then, and many Americans' ancestors hadn't even arrived in America by then. Anyway, reparations is to be a giant step forward in not giving someone the treatment due someone else merely on account of skin color.

President Barack Obama's position on reparations, like reparations itself, depends on skin color; in this case, the skin color of the group he's speaking to. It is possible that Obama owes both groups a monetary payment, as reparations for trying to be too clever by half.

African-Americans can voluntarily renounce their racial identity; for instance, by graduating from high school, cooperating with police, or not having babies until they are married. Such individuals are known variously (by African-Americans) as "sellouts," "house-Negroes," "Oreos," and "motherfuckers."

Non-African-Americans cannot renounce their identity as descendants of slave-owners, but black-as-coal economist Walter E. "Uncle Tom" Williams has personally absolved them of any future guilt and sense of duty.

The National Afro-American Museum and Cultural Center in Wilberforce, Ohio has resources you can use to study African-Americans further, including:

For those without comedic tastes, the self-proclaimed experts at Wikipedia have an article about African American/racist.