It's a Saturday afternoon and you eagerly lay a small square shaped piece of paper about five millimeters long and five millimeters wide on the shiny glass table in front of you while sitting in your cozy little living room. Your squint eyes focus on the small Bart Simpson picture imprinted on the little square block. Your stomach gives a tiny lightning bolt lurch and for a brief moment an unexpected adrenaline rush causes your mouth to nervously force a twitchy smile. You are preparing to go to your friend, Tony's house (stop denying it, he is your friend and you like him) to have yourself a good ol new year's party experience.

"I can take it now and I’m sure I will get to Tony's house in time for the party before it kicks in," you think, before picking the harmless little piece of paper up off the table and examining it more closely.

For a while you have an argument with your conscience, and contemplate whether you should take it now or when at Tony's house, or if you should take it at all, but ultimately temptation wins and without any more delay, you confidently place the piece of paper under your tongue.

"Too late now," you think, but this thought is intercepted by the contradicting thought that you still have the opportunity to take the paper out of your mouth and not feel its full effects. This is however just a figurative way of thinking and of course you have come this far already, so why stop now? You have done this once before anyway (Don't try to bullshit. You have!).

Knowing what is coming; you quickly grab your fully packed backpack and head out the front door in a hurry, making sure to make good time by quickly locking the door to ensure that nothing will happen on your fifteen minute drive to Tony's house.

The bicycle, I mean car ride[edit]

Under your tongue, you can feel the tasteless and odorless paper becoming pulp as you get into your car. "Twelve hours here we come," you think as you put your car into first gear and make your way down the narrow road towards the first intersection.

Beautiful, tall trees move with the ebb and flow of the mellow, spring breeze as the afternoon sun waves goodbye to another day. Your mind is on one thing and one thing only, and you know this won’t change until you reach Tony's house. 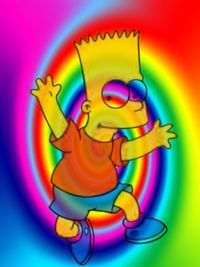 This is how you see people on acid.

"Damn it!" Your heart skips a beat and your excitement is suddenly replaced by a small jolt of paranoia as you approach a very long queue of cars at the second intersection. The traffic lights are out and nobody is patrolling the intersection. This will definitely take some time to get through.

The paper under your tongue has almost completely dissolved now and the last chewable bit is swallowed absent-mindedly as you look around nervously at all the traffic around you.

"It’s ok. I’ll get through this in time to get to Tony's, I still have at least 20 minutes before anything happens," you think as you try to convince yourself that everything is going to be just fine. You turn on the radio and a Bob Marley song plays, "-Every little thing is gonna be alright..." As you listen to the song a feeling of relaxation kicks in and you are convinced by the mighty stoner's words that everything is gonna be alright.

"I bet Bob Marley has taken loads of acid in his lifetime," You think as you approach the intersection with only seven cars in front of you to go before it is your turn. "Yeah, nothing to worry about, I am still completely in control and relaxed and still have lots of time. What is the time anyway? Where is my phone? Wait! I don’t like this song anymore. Ahh crap I left my phone at home. OH it’s my turn to go."

You finally make it through the busy intersection and as you approach the next intersection, only three blocks away from Tony's house, where thankfully there is no traffic, you are suddenly spun around in a crazy haze of confusion as a car comes crashing into you from the side.

Only you know, (or perhaps you don't) what's going on in that head of yours as you are brainfucked by what had just happened. In your moment of complete flabbergastedness, you look around frantically until your eyes finally rest on some yellow, fuzzy guy about five feet away from you. "Who’s that guy? Ha-ha! He looks like Bart Simpson. Hi Bart Simpson! You rock and I totally watch your show dude!" You think, while admiring the large lump of yellow.

After a moment of fascination, silence and staring the yellow man-sized figure approaches your car from the other car which had just crashed into you. "Hey Superman please say sorry to Florence, she got hurt when your Batmobile hit her," the yellow man says to you as he walks up to your window.

You can see now that it wasn't Bart Simpson all along, but some stranger, perhaps your alter ego? How can you be sure? You are somewhat disappointed that it isn't Bart. You like Bart allot. "Where the fuck is Bart? He is late for his appointment!" You think in your newfound state of instanity.

Why can’t you figure out why the cracks on the windscreen are moving so much? The cracks look really cool though, it reminds you of magicical water. "Hey dude got any magical water on your side?" You suddenly ask the stranger. The stranger looks around in bewilderment, but instead of finding this question strange in any way, he replies "I would have to check my fountain, but dude please can I do it later I’m kinda in the middle of something." 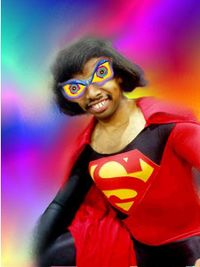 This is how people on acid see you.

"What are you in the middle of?" You ask in confusion, and after a long moment's silence the man looks around him, turning his head this way and that way, as though discerning where he is, before answering, "The road dude! The road! HAHAHA! I’m in the middle of the road and this is a car accident! WOAAAAAAAAAAAAAAAHHHHHH! DUDE! HECTIC! HAHAHAHA! I remember now! There I was, holding that little Superman paper in my fingers and then I was on my way to... Was it Hogwarts or was it that party? Wait! Oh shit I’m late for the party!"

You are at first very confused about the fact that A: you are being called dude continuously by some random guy and B: you too are in the middle of the road, but you are easily distracted by small bits of glass falling all about you like sparkling diamonds as you open the door and casually get out of the car.

"DIAMONDS! Everywhere! We are rich! Hahaha we are so fucking rich! WOoHOoO!" you exclaim as you find yourself in a world of wealth, but your moment of fortune is suddenly interrupted by the realization that this guy had just said the word party, and you sorta remember something about a party.

"Wait! You said party! Who's party? What party again? Who's party! Am i invited? Wait a minute, I'm suposed to be at a party!" you exclaim as you fill up with excitement at the prospect of a party, but once again you get completely sidetracked by the fact that you were just in a car accident. "Shit dude! This car is an accident! Is it serious? Am I dying? Oh my god am I dying? I don’t want to die!" you yell as your delayed reaction of realistic realization catches up with you.

For a moment you are temporarily shocked, but before you can completely freak out, the stranger, who must have just had a hectic realization too says, "Calm down! If you’re going to a party and I’m going to a party then we must both be experiencing the same thing right? Let’s think back. I was flying to the shops to get some alcohol, or was I driving? Reminds me of a song, was I flying, was I driving. Wait! That’s not a song!"

"DUDE! Please just make some sense!" You yell, as you too lose complete track of the whole situation. "Wait a moment! I took acid! That’s what this is! You are probably not even real and neither is this dragon! WOAAAAAHHH see that dragon? Dude, see it?" You ask the stranger as you point towards the stranger's car, which is silhouetted by the shadowy darkness of the arrival of dusk, and which of course is not actually a car but a dragon, you are completely sure of this.

"DUDE! I see it! Hahaha WOW! Wow! Wow! Ah it’s gone! Come back Mr. Dragon! Ok then! Fly free!" The stranger yells as he waves his hands at the empty sky, confirming that what you saw was real.

Your moment of awe stops suddenly as you hear familiarity in the stranger's voice, "Hey dude, I’m sure I know you from somewhere. Who are you?" You ask the stranger, while trying desperately to see his face. The stranger looks at you in surprise before saying, "Oh! Hi there! I’m Tony, Pleased to meet you stranger."

You just saw what happened to you after driving a car, so why the fuck are you still considering riding a bicycle!