Welcome to our magnificent civilization![edit] 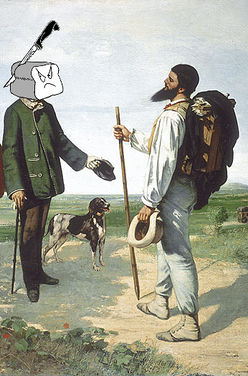 Greetings, honored traveler Digimon, and welcome to the glorious nation of Uncyclopedia! Thank you for your contributions to the site. I hope you enjoy this great land and decide to make a home here. If not, the city exit is right over there... no, a little more to your left... yeah, there you go. Anyway, here are a few helpful links for humble newcomers such as yourself:

If you read any of Uncyclopedia's sacred parchments, make it the above two links. If you want to find out more about Uncyclopedia or need more help with some sort of issue, try these:

I hope you enjoy editing here and being a proud citizen of Uncyclopedia! Please remember to sign your name on all talk pages by typing four tildes (~~~~) or alternatively use the "sign" button (

) that you see just above the edit box. This will automatically produce both your name and the date.

If you need any sort of help, then feel free to ask me on my talk page, ask at the Village Dump, or add the following template: {{help}} to this page along with a message describing your dilemma and someone will come along and help you if they can.

If you really are a Witness why would you ever contribute to a site like this? Someone's not listening to the Society.

Drew article is about to be huffed[edit]

Eh, I never really cared about the article. I thought it would be a fun project to work on, but I didn't have much inspiration...so I abandoned it. --Digimon 15:35, 5 September 2007 (EDT)

I know you are quite upset on the huffed Dawn article.[edit]

I should I take the blame here, I was mostly editing this article putting in references of drugs and rape on the Dawn (because she's hot :P). Uncyclopedia is kinda starting this Pokemon huffing program and I think May might be the next target. Anyways. don't fell bad, It's basically my fault. Dawn is really a noob in the Pokemon anime and yes I believe she is hot.--Dark Paladin X 21:27, 11 September 2007 (UTC)

Uncyclopedia claims that they deleted the Dawn page right? Well, Dawn means plenty, such as dish detergent or some part in the day (don't know, don't care). So I mean that Dawn (Pokemon) would be a new page, get my meaning? You can recreate it, I don't mind, that's if you really want to, as you felt very sad for its deletion. Just like when Darth Vader killed his wife, or when Hitler commited suicide for the Dutch. Anyways, if you do recreate it, might I suggest stalkers to be General Grievous, Davy Jones, Emperor Palpatine, Invader Zim, Thomas the Tank Engine and Friends, Giga Bowser and George Dubya Bush? All would have one thing in common, evil, stupid, ugly, and horny, well that's four and a suggestion. I'd also put quotes. YOU OWE ME!! JUST KIDDING! YOU DON'T... Actually, I don't really care, I mean I'll write a draft on my userpage to get it revived... but you can give me ideas (I'll need em!!). -- Ineedaname 17:45, 26 October 2007 (UTC)

This Userpage gave me terminal 7[edit]

If I could QVDF userpages this would be the first one