From Uncyclopedia, the content-free encyclopedia
< User:Naughtyned
Jump to navigation Jump to search

For those without comedic tastes, the so-called experts at Wikipedia have an article about Jim Crow.

James Earl Crow (1860-1946) was an exulted musician from southern Alabama. He debuted in 1882 at a theater in Chicago. He went on to perform all across the United States, before becoming one of the earliest advocates of civil rights. 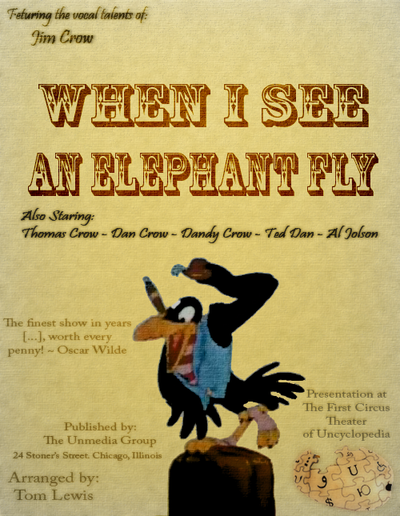 Jim Crow, a member of the Crow Indian tribe was born the son of slaves in Mississippi. After the Civil War his family moved to Oz with the hope of starting a new life. However, they encountered hatred from the Scarecrow and the Grand Wizard almost immediately. Having left one home, they were not about to be forced out of another, so the Crows decided to stay and fight the good fight. They retained noted civil rights attorney Barack Obama's Teleprompter, who allowed the poor sharecropping Crows to pay a sliding scale fee.

Jim was one of six brothers and had eight sisters. When his parents died, his brothers and sisters flew away from Oz, some settling in Harlem, some in Detroit, and some in Oakland, but Jim decided to honor his parents memory by continuing their struggle.

Crow was unable to remain a sharecropper for very long into his adult life due to the success of the Scarecrow at chasing all crows away from the farm lands of Oz. In order to survive he took a job with Munchkins in a lollipop factory. It was there that he met his co-worker, and best friend Dumbo the Elephant, who was at that time a refugee from the circus. He taught Dumbo how to fly and Dumbo in turn helped him in his battles with the powers ruling Oz. In later years when Dumbo returned to the circus and became a star, he made enough contributions to an organization that Crow founded - The NAABB (National Association for the Advancement of Black Birds) - so that Crow could become a full-time civil rights worker. Crow survived several attempts on his life, including the time that the Scarecrow and several of his cohorts hung him upside down with a fucking fork up his ass.

Crow remained friends with Dumbo throughout his life. Whenever the Circus was in Oz, Dumbo would arrange for Jim Crow and his family to have front row seats of the opening night performance. He also visited the Crow home whenever his schedule allowed.

Though Crow died while the Scarecrow and the anti-Crow Grand Wizard were still in power, the heroic struggles of his life inspired future civil rights leaders, such as Martin Luther Crow and Malcolm Jaybird. Many protesters at the marches on Emerald City in the 1960s wore pins and t-shirts, or carried signs, bearing the image of Jim Crow. Many African Americans pay homage to Crow, typically mentioning him in their raps, and some even forming rap groups with his name.