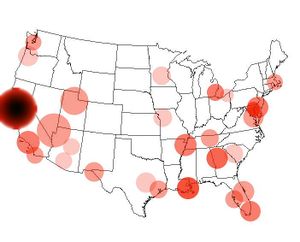 Dr. Peacock's map shows not cities or features but instead charts sinfulness in different areas.

KANSAS, USA -- Geographers at Kansas State University have produced a new map of the USA which charts not roads, cities or geographical features but sinfulness. They created indexes for each of the seven deadly sins (pride, gluttony, sloth, greed, lust, wrath and never cleaning out the bath after using it if you live in shared accomodation) and mapped how prevalent they were in several major American cities with each sin being measured according to instances of certain activity in those areas. These were then marked on the map in red, with light red denoting a low level of sin, dark red denoting high levels of sin. As an example, wrath was measured by looking at levels of violent crime - this can be seen on the map by the sin field produced by Los Angeles at the bottom left of the map when compared to the smaller, lighter one produced by San Diego just to the south.

The northern parts of the map holds few surprises. There is a marked concentration of sin between New York, Washington, Baltimore and Philadelphia as one might expect, though researcher Dr. Chris Peacock - who carried out the project - is quick to deny the map demonstrates that the average resident in this area is more sinful than those in another area. "We'd expect a high reading here," he says, "due to the fact that there are four large cities - which do tend to promote sinfulness amongst a limited number of people - situated very close together, which creates a high level of background sin. Well, that applies to Washington, Baltimore and Philadelphia, at any rate. It's obvious to anyone who has been there that everyone living in New York is in league with the Devil."

Atlanta also has a high sinfulness rating, believed to be caused by high levels of gluttony which was measured according to numbers of fast food outlets per capita. "The other sins are fairly low in Atlanta," says Dr. Peacock, "But the city has the highest number of KFC and other fried chicken outlets in the nation, leading to it showing up on the map as a very sinful place." The north of the country, unsurprisingly, has very little sin which may be due to the general tedium of the cities. Dr. Peacock says, "No doubt back in the day, when people would be cooped up in their homes during the long hard winters experienced by the northern cities, lust levels would have been through the roof. However, now that people can go from house to heated garage and drive to a heated carpark without ever exposing themselves to the freezing air they seem to be able to occupy themselves without resorting to carnality."

The south shows an almost-unbroken chain of low-level sin all the way from San Diego in the west to Miami in the east. "That's the Bible Belt," explains Dr. Peacock. "We expected sinfulness to be much higher there, but we figure it shows up as low level because although there's a lot of sin of all types going on down there, not much of it gets reported to show up on official figures because they're keen on maintaining their holier-than-thou, whiter-than-white image."

Certain regions hold no surprises whatsoever. In the far north-west, Seattle - possibly the United State's most liberal city - shows a far darker sin field than Portland, so Portland's is a little larger which suggests that sin is concentrated in the centre of the former. At the opposite end of the nation, Miami, Tampa and Orlando have high levels which may be caused by the slothfulness and wrath of the many elderly residents. "The elderly tend to be non-violent, but they sure are lazy and they're full of wrath - they're always railing against something or other, be it prices or the way young folks dress and conduct themselves these days," says Dr. Peacock. Las Vegas has one of the largest sin fields on the map, caused by the extremely high levels of greed in the city.

The two most sinful places are to be found in Louisiana and California. New Orleans, just as you'd expect, shows up as a large and dark patch while San Francisco has burnt a hole through the map. "We expected to find a lot of sin there," Dr. Peacock, a Republican, told us, "But, dammit, that's just ungodly."