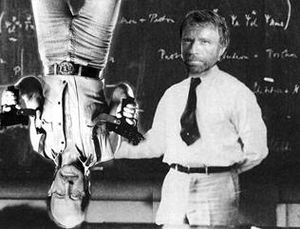 The term was buried in a sketch where, "Jon Stewart rips Fox "News" and hostess Gretchen Carlson for fudging numbers, spreading misinformation and displaying their overall ignorance."[2] The controversy centered around a Rassmussen Poll on how much Americans love their children, and the results, which added up to %120. Stewart later referred to the accuracy of Rassmussen Polls having, "a margin of error of monkey fuck ridiculous."

Many noted institutions of higher learning have sponsored research in this area, but none are so keen to keep up as the Uncyclomedia Foundation. The Department of Etymology at Uncycloversity has been pushing the envelope in the last year with cutting edge animal fuck references, such as Bat Fuck Origami, as well as old standbys; animal fecal references like Ape-Shit Crazy

UnNews staff have been working furiously to propagate the meme "monkey fuck ridiculous" across cyberspace, since December 9.