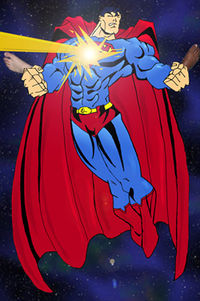 Superman resists arrest as The Fortress of Solitude is raided.

Louisville, Kentuckistan -- Superman, beloved defender of the free world, has had a rough week.

His troubles began on June 14th when he brought a young female companion to the Fortess of Solitude to watch some television. Around midnight, neighbors complained of loud "scream like" noises coming from the fortress, prompting a visit from local authorities. Upon their arrival, two officers discovered the shocking skeletons which lurk in The Man of Steel™'s closet: or more specifically, the feet of those skeletons -- hundreds in fact, neatly laid out like pristine basketball shoes in an episode of MTV's Cribs. The closet which housed the grotesque collection of anatomy was adorned with a customized neon sign, identifying the room as Footsies All-Night Burlesque; yet another fact which has friends and colleagues of the superhero perplexed and distraught. In all, police removed close to 130 sets of feet from the fortress, exposing the bizarre truths of Kal'el's secret obsession. "I had no idea." claims fellow hero and former collaborative crimefighter The Flash. "My feet are my livelihood... I'm really disheartened by this whole ordeal."

The forcible arrest and presently-delayed trial are the least of Superman's current troubles. After word of the June 14th incident began to circulate, Superman watched as his financial assets crumbed before him, powerless to stop their demise. In one day, Superman lost several lucrative endorsement deals, including a major contract with Six Flags theme parks. In the next, DC Comics informed the hero that subsequent Superman film and television projects had been halted indefinitely. Worse still, a possible revamping of the current Superman comic book storyline may write Mr. Kent out of his own series. Sources close to the former arbiter of justice claim the hero is devastated.

However, Uncyclopedia didn't believe said sources, and roadtripped to Louisville for a first-hand viewing of Superman's misery. From his tiny cell, the tarnished hero weeps silently. "I could break out of here at any moment, you know.." he says in a trembling voice. "I could use my laser beams and tall building-jumping abilities to just go, but whats the point? I've got nothing now." Superman declined most questions involving his foot obsession, but did make one state that "[I] never wanted to remove the feet completely.. damn it.. just be glad you pathetic mortals don't have super strength." It has been rumored that while incarcerated Superman has been medicated for depression and given Prozac -- super strength.

In one week, Superman has gone from famed international protectorate to blacklisted international outcast. The Fortress of Solitude is currently slated for auction sometime next month (several potential buyers, including General Zod and the illusive Composite Superman, have expressed interest). The Justice League is in a state of frenzy, scrambling to name a new leader and spokesperson. Major bank robberies and other socially reprehensible behavior involving large robots, deathrays and other fantastical devices are being planned by up-and-coming super villains all over the galaxy.

Lois Lane is deeply depressed and is now staying with Aquaman for comfort and support though she has to return to the ocean's surface every few minutes for air. As a result Lane complained "Intimate relations have to be completed very fast. That may be fine for the fish guy, but it does nothing for me!" She continued "It's not fair to compare Aquaman to Superman, but by comparison, Superman was, well..., super." "All this water makes me look like a shriveled-up prune," she complained.

From homeworld Krypton, Superfather Jor El claims that though he doesn't approve of the violence, he is willing to support his jettisoned biological son. "While I don't support his actions, he's still my son, and he's still a man! Well, I guess technically he's not a man, he's a Superman, but still, he's got "man" in his name and that means he deserves to be treated with respect and dignity! This does explain his abnormal interest in Monty Python's opening credit sequence though.."

Louisville prosecutors are having some trouble constructing their case against The Man of Steel™. "Feet, we've got plenty of" claims prosecuting attorney and radio talk show host Mark Levin. "It's the rest of the bodies that we're looking for. Somewhere out there, there has got to be a bunch of feetless women stumping around, afraid to reveal the details of their assaults. We're asking any woman (or man) involved in Superman's depeditation spree to come forward and help immobilize him for good."

One woman questioned was Linda McCarthy, former wife of the Beatle's Paul McCarthy, who was known to have briefly dated Superman. McCarthy said "Whatever Superman and I may or may not have done was completely consensual," said the one-legged dancer.

Bruce Cutler, John Gotti attorney, and O.J. Simpson attorney, Flea Bailey have been called in to defend Superman. At a hastily called press conference Bailey said "We're going to move for a change in venue, or maybe even dismissal." Cutler added "I don't even see how Louisville has jurisdiction over a supposed crime that took place in the North freakin' Pole. The penguins and polar bears will have to decide this case." Both concluded "We also suspect that Gold Kryptonite may be responsible for any unusual behavior." They requested that the public "not prejudge the case" and to "please, just keep an open mind."