A typical redneck voter from 2016, pledging his vote and undying love for Hillary.

WASHINGTON, DC: A new national study funded by the League of Democratic Women Voters (LDWV) has unveiled a shocking result about the 2016 Presidential Election: up to 35% of Americans who had cast their votes for President (nearly 50 million, out of approximately 139 million) willfully, deliberately, and flagrantly voted for the presidential candidate that they didn't actually want to have as President. In other words, they lied. They lied in the sanctity of the voting booth. They broke their pledges to themselves by voting for somebody else entirely, somebody they weren't supposed to vote for in the first place. And now, we are all paying dearly for the consequences. 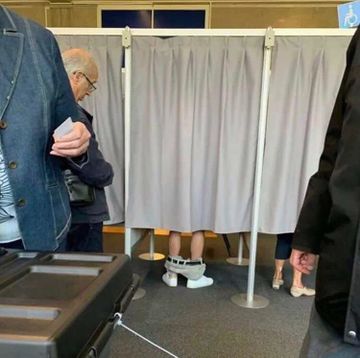 The highly secretive underworld of privatized voting has rarely been examined for hints of fraud and abuse. The first tell-tale sign that something was amiss was the widely-known and publicized fact that Hillary Clinton was soundly defeated in the 2016 Presidential election, despite having won the 2016 Presidential election by a hefty margin. The unbiased researchers then examined in detail many nationwide opinion polls conducted prior to and leading up to the November general election, and found out that Hillary managed to out-poll Donald Trump every single time. Given the presumed honesty[1] of average Americans when repeatedly and loudly badgered about their preferred political leanings, it follows that vast numbers of those very same Americans violated that public trust by casting their Presidential votes for the opposing candidate.

Voter fraud on this massive scale has never previously been documented, even long before the secret ballot process was widely adopted by primitive election kiosks throughout the primitive United States. Proponents of the study could offer only one seemingly adequate reason for this bizarre phenomenon: the long-held practice of secretive voting by completely isolated individual citizens encourages and rewards personal dishonesty, thereby enticing them to become "faithless electors" with no perceived fear of reprisal from either their fellow peers or law-enforcement authorities.

LDWV spokesmodel Emily S. Litella (lifelong suffragette and part-time seamstress) told us that "Every malicious lie told in the deep dark and smelly confines of a tiny voting booth is just another bullet being chiselled away from our fragile tapestry of democracy.". Even though there are currently no known Federal or state regulations against a citizen voting in a manner contrary to one's own personal conscience, the elderly Miss Latilla assured us that "There oughtta be a law against that kind of perverted behavior!".

In light of these groundbreaking findings, The League of Democratic Women Voters now officially advocate that the secret ballot (currently a mainstay of American electoral procedures) should be immediately abolished nationwide. They also say that the best way of encouraging voter honesty is to rip away every single curtain, wall, or flimsy piece of cardboard from America's voting booths and require voters to sign (in the harsh and unforgiving light of public disclosure) their full names and Social Security numbers and email addresses on both sides of every ballot cast, and have their actual votes carefully scrutinized and certified by hired local election officials. While this draconian measure would not necessarily guarantee that any given voter would remain faithful and true to his or her own deeply-held convictions, it may go a long way towards preventing the future elevation of outright liars to the highest office of the land.