The Pledge of Allegiance is a oath of allegiance to the United States of America, its flag, and everything it stands for: Christianity, white supremacy, conservatism, fascism, etc. It is law for all residents of the country to recite it every day. Those that refuse to make the pledge always disappear mysteriously within a week. Witnesses report seeing black helicopters carry them away. Others maintain that they are struck down by a bolt of malice by God. 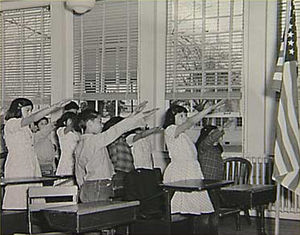 Students reciting the Pledge while doing the "Bellamy Salute".

The Pledge of Allegiance was written in 1892 by Francis Bellamy and published in the September 8 issue of Youth's Companion, a children's magazine. The Pledge was allegedly written for the 400th anniversary of Christopher Columbus's discovery of the New World. This was actually a cover story put in place by the government. The pledge was developed as a simple form of brainwashing by Bellamy, a scientist posing a baptist minister. At the time, the government was planning to invade The Philippines, Cuba, and Puerto Rico for no apparent reason, so to prevent people from asking "Why the hell did we invade some stupid islands that no one cares about?", the government funded brainwashing. The original pledge of allegiance, used from 1892 to 1923, when like this:

Bellamy also came up with a salute to be done with the Pledge (as seen in the picture to the right). When the reciter got to "my flag", he/she would raise his/her arm with the hand held pointing toward the flag, the palm downward. This salute would later inspire the Nazi salute.

In 1923, the government removed the part about "not criticizing the government about pointless wars" after someone noticed that that section was there. In an effort to cover their tracks, the government removed all traces of the passage and has denied its existence ever since. The government, in an act of pure greed, also changed "my flag" to "the flag of the United States of America". This change was made because the government never learned to share and wanted all the flags for itself. The new Pledge went like this:

Throughout World War II the "Bellamy Salute" was used during the pledge of allegiance, despite its strong resemblance to the Nazi Salute. After the war, holocaust survivor's were offended by the use of a Nazi-like salute. The Americans, then a polite and obliging people, changed the way they saluted the flag as not to offend their Jewish friends further.

In 1954, in a effort to reveal the true colors anti-Christian, and therefore unamerican, groups such as Communists, Socialists, Liberals, and Catholics, the words "under God" were added to the Pledge of Allegiance. The new, proper pledge that was jam-packed with family values and truth was so popular that everyone was required to say it. Anyone who didn't say the Pledge was obviously unamerican and could be taken away and shot. The First Enlightened Pledge, as it is called, read as follows:

The best excuse that unAmerican people who don't say the pledge can come up with is that saying the Pledge with "under god" is infringing on their constitutional rights to freedom of religion and freedom of speech, but that's just a bunch of bullshit.