Poles are tired of eccentricity of current government. Here we have the Polish coat of arms revised in honor of the countrys three leading polititians: Lech Kaczyński (Polish Duckman), Jarosław Kaczyński (his twin) and Donald Duck-Tusk.

STOLEC, Poland -- It has been another rainy day in this small and overcrowded country in Eastern... uh... Central Europe, and most Poles were going to work, as usual. Another year has passed, and nothing has changed. It's been twenty years since the transformation from Communism to Democracy, and two years since Polish Prime Minister Donald Tusk took his office.

Donald Tusk, together with his Civic Platform, party promised before elections that he will fashion a miracle, he will transform Poland into second Ireland and he will personally stop all corruption in country.

There have been five big corruption scandals in Poland this year, including a 400 million Euro fine from European Union for nepotism at building freeways, and a gambling scandal after which 6 Ministers suspected of corruption have been dismissed. Scandals have become so common here, that the entire country is now experiencing corruption fatigue.

Many now agree that, despite politicians claims that Poland has been experiencing an economic boon, in fact they have been fluttering on the winds of the greater world economy. What looks like success or failure has nothing to do with productivity of the country itself, but rather seems lately to have been riding the coattails of good fortune.

Another point of contention amongst many Poles is the pre-election promise by Prime Minister Donald Tusk of transforming Poland into another Ireland, whatever that means. Many understood this to meant a ban on any abortions, expelling Protestants and replacing vodka with whiskey as the national drink. Voters were torn between pride of their national vodka consumption and natural hatred of Protestants, sowing confusion in the electoral process. 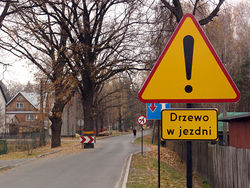 Some say that Polish roads are bad. But seriously. Do you see anything wrong with Polish road in a picture above?

On the scene reporting from our Polish correspondent[edit]

Polish started riots because their petition were send back as "Return to sender" beacause Polish Post Office couldn't find address of Polish government. Riots began in front of Polish government headquarters. Polish redundants were throwing eggs towards building but it was too far away and all eggs landed on grass. It's really probable that government won't do anything and in next election another party will win. As it has been always in Poland for last twenty years.

So now we have rioting Poles and hidden government and looking into future, Poles will be bored of rioting and will go home and government, typically for Poland, won't do anything.

"Poland is worst place to live'"' said one from rioting people.

"Actually I would love to move there" said Brendan Taylor, white Zimbabwean cricketer, proving that point of view is important and that Poles are just lazy alcoholics that want miracle from their government while they are not doing anything to help.