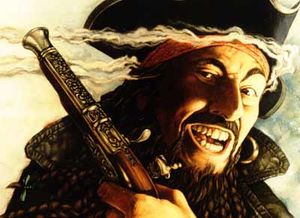 The founding mother of the FSM religion, Queen Victoria

CORVALLIS, Oregon -- Oregon State University (OSU) hosted the country's largest and only congregation of Pastafarians to participate in the US government's National Day of Prayer celebration. While the Flying Spaghetti Monster and his high-cholesterol suffering followers are still not yet recognized by any of the world's legitimate governments, it is still considered a more believable religion than Scientology and all its stupid Alien DC-9s and Thetan crap.

The Flying Spaghetti Monster, according to authoritative source Uncyclopedia, is a composite deity composed of two separate, and distinct parts. It is the central point of worship in the religion commonly known as Flying Spaghetti Monsterism or Pastafarianism, according to which it is The Creator and Overseer, watching our lives and our world, changing them as it sees fit. 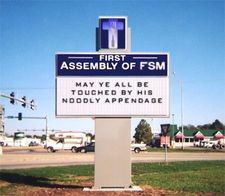 The first and only official church of FSM

UnNews Senior Mythology Expert, John Travolta, had this to say from his closet in Beverly Hills. "While Scientology is the only true, free and democratic religion for all people, I gotta say that... Oh my Gawd! This Flying Macaroni Dragon is a really cool religion too. I think only, like Canada, recognizes it, but, those people are originally from another planet. I know because, I'm a third level clear."

While the OSU event was only attended by three dozen sophomore general arts majors who skipped their scheduled under-water basket weaving class, they were all arrested by the RIAA on the charge of digital music piracy. When asked how his clients would plead against these charges, their Piratian lawyer, 'Black' John Rackham shouted, "ARRRRRRR!" then raised his cutlass and slaughtered a nameless and unimportant CNBC reporter.

No charges were filed against Mr. Rackham as he had refused to grant the reporter parley.

The National Day of ARRRRRRRRRRRR was also the day when Joseph of Aramathia carved his last words into the rock of the Cave of Caerbannog, where he said "He who is valiant and pure of spirit may find the Holy Grail in the Castle of ARRRRRRRRRRRR." Some scholars dispute this though, because Joseph probably died while carving it. This argument is countered with the fact that, had Joseph of Aramathia died while carving it, he wouldn't have bothered to carve "ARRRRRRRRRRRR", and instead he would have merely said "ARRRRRRRRRRRR". It is also suggested that "ARRRRRRRRRRRR" was merely a misspelling of "ARRRRGGGGHHHH", which is usually screamed when one is being devoured by The Legendary Black Beast of...ARRRRGGGGHHHH!!!!!!