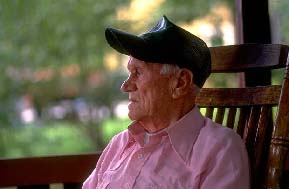 Look at my face. I'm not happy one bit. I want my TV to work. I used to watch Jackie Gleason on this set 'fore I went to 'Nam.

Lancaster, PA -- My name is Wilford Pissbritches and I'm 74 years old. I've got a bone to pick with you long-haired hippy kids. I've had this TV for as long as I can remember, and now, the goddamned thing won't work worth shit! All I get is some snowy crap, these little white dots and speckles all over this black background. The hell's wrong with this thing?

I am a widowed retired 'Nam veteran and McDonald's cashier, and the shit I go through ain't nothing compared to this hippy-happy nonsense. I tried bringing in my TV to Uncle Charlie's Salvage Emporium, only to find out that old Charlie had been dead for eight years and his grandson owns the store now. He's some spiky-haired punk named Fizz Chesterfield. He told me I need some fancy whoozits and whatzits, and I didn't know what in Sam Hill he was jawin' about. 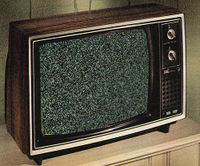 What the hell is wrong with this damn thing!? I've had it for 50 years! No wait, that old thing broke back in '58. Then I went and got this one in '62 when they first came out with those colored TVs.

I don't wanna mess with some hippy gadgets, and I really miss the three channels I used to watch every night and every day. I'd come home from a long work day and turn on some Dick Van Dyke and Lawrence Welk. I don't need no remotes or cable or any of that baloney! I just want my three damn channels -- NBC, CBS, and ABC. I don't care for Fox that much, except when I'm watching House. That doctor guy looks like my doctor. Dr. Jones ain't cheap, either. He charges 'bout $20,000 per visit, and I'm lucky I got VA and MediCare and all that good stuff to pay for it all.

I think I'm getting off topic here, but the doc says my 'Heimers is getting bad. Let's see, where was I? Oh yeah, my damn TV. My pa bought it for me, I think, back in '52. Or no, I bought it, when color came out. Back then, we had only one channel, it was WWII-TV in, Utah, I think. No, it was New York, or somewhere. Wait, I didn't move to New York because it was too damn expensive. My first wife, Ethel, went, though. When in the Sam Hill did I get this TV?!!

I went to my friend - Murray? Abraham? No...oh, that actor F. Murray Abraham (you know, that guy from Amadeus) -- and only F. Murray Abraham had a working TV. He told me about some "converter box" hippy nonsense, but I thought he was smoking a toke.

Now I'm stuck here in my retirement home without a damn TV to watch. Maybe I'm quaint, but I don't wanna mess around with all the computerized nonsense; it's too scary for me. In fact, I'm writing this on a 1974 typewriter and having some hippy kid transfer it to computer. If anybody can help me get my TV to work, feel free to come down to the Jessica Alba Assisted Living Center for Retired Persons and ask for Wilford, they'll know who I am. They're nice, but they wake me up when I'm taking my nap. And I hate the apple sauce and medicine they give me every Tuesday at 5:00.

I want my damn TV.

For more fake news on this topic, read:
TV Series The Wire Threatens Nothing Short of Middle Classes Extinction