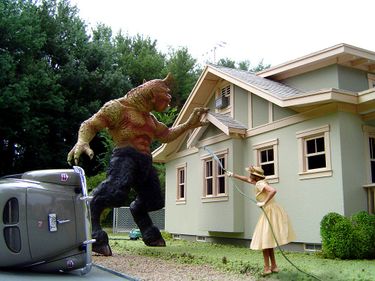 Mrs. Hedda Waters of Farquaare Street is shown trying to ward off a Cyclops from her home. The family believes that the pesky beasts are seeking a tasty treat - a hamster that the Waters daughter had been keeping for her fourth grade class at Bob Eubanks Elementary School.

TARPON SPRINGS, Florida -- While enjoying her morning coffee, Mrs. Hedda Waters of Farquarre Street SE heard an odd noise coming from her second floor. "It sounded like our contractor had started working on vinyl siding project, but it was only 8AM and who ever heard of a contractor showing up for a job on time?" So Waters' donned her hat and gloves, and light weight wrap to guard against the morning chill, and was surprised to find something else going to work on her house.

A twenty-four foot Cylops was attempting to gain access to the Waters' family home for the fourth time this month.

"Honestly Celeste! You would think that the pathetic thing would realize that we're on to it by this time, but it just keeps coming back," said Waters. "The man at the hardware store said they aren't the smartest things to walk this earth - but this family of them sure is persistent!" she said while wielding the garden hose at the beast.

"I told that beast 'Now shoo!'" Waters said as she re-enacted the event. "You need to go back to where you belong and leave us alone! There is nothing in my home that concerns you!"

The attacks began after the Waters' ten-year old daughter Tempest brought home her fourth grade class pet hamster, Taffy, for the weekend. Within hours, the family noticed odd rustlings in the pine grove behind their house, and disturbances in the DishNetwork reception.

"Tempest came downstairs after we sent her to bed and she told us that something was peeping into her bedroom window and fogging up the glass! Imagine our surprise to find a male Cyclops looking in her window! And I just cleaned that window just that morning, and there it was just as brave as could be mussing up my clean window with its breath and saliva! The stench was simply awful!"

According to Dr. Willard Rodentia of Pan-Floridian State College, Cyclops have been known to be found as far south as Tarpon Springs, but "They seldom cross the Alabama State line."

The Waters' family repelled the beast using a garden hose and pressure nozzle. "Clyde at the TrueValue Hardware store told me that rat poison wouldn't work because of the shear size of the beast. So he suggested that I turn the hose on him to get him to take the hint."

However, the Cyclops returned the following night and this time it was more focused in its attack.

"On its second visit it ripped the roof right off of Tempest's bedroom! Holy cow! What a mess! We were out there a whole ten minutes with the hose on that second night!" said Mrs. Waters.

Rodentia believes that the Cyclops was attracted by the smell of the hamster. "A Cyclops will crush, trample or even throw a human like a ball, but for the most part they do not care for the way we taste. While they are lacking in stereo vision, God has made up for this shortfall by giving them an acute sense of smell and it no doubt caught the scent of the hamster."

"Most Cyclops are male, but I also understand that the Waters were very fortunate in that one of their visitors was a girl Cyclops. That is very rear indeed."

On its third visit a female Cyclops appeared. "Did that professor over at the University really say we were fortunate to have a female Cyclops? Let me tell you, mister that thing was a real nightmare to get rid of," said Guy Waters. "She was a real pain in the you know what. She damaged my new vinyl siding that we just had installed! Now did she need to do this? No. She was just being a bitch! Finally, Hedda got so mad she went over and kicked her in the hoof. The She-Cyclops took off, but I was sure we hadn't seen the last of her."

Today that portend of future events came true again when Hedda Waters found a smaller male attempting to get into their home.

"You know, I thought this might happen after we returned the hamster to the school. I was going to scrub down our daughter's room with some of that strong smelling brown Lysol, but Guy talked me out of it. Well, after this little guy's visit today, and the damage that it caused to Guy's prized 1939 DeSoto, I think that he'll be the one cleaning up this mess."

"At first that hose trick seemed to work," said Mr. Waters. "But if this keeps up we'll have to go to stronger measures and get a dog to run these things off."

Damage to the Waters home was estimated at $11,500 as a result of this attack.