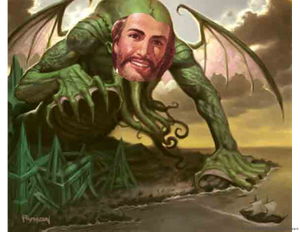 GULF OF MEXICO, The Ocean -- Interoffice memos from British Petroleum were leaked today by BP turncoat and whistleblowing weasel Fetish McBrennen, detailing an ongoing business relationship between the ocean-destroying corporation and a relatively obscure abomination, Cthulhu-Jesus. According to these documents, BP middle, upper and top management were required to worship It, and allow Cthulhu-Jesus devouring rights to their souls upon retirement. This policy was implemented after a side deal for reserve cash with con man and sociopath Jesús Cthulhu.

Forensic accountants have uncovered an ongoing effort to obfuscate the two events, making them appear unrelated. In light of these revelations, the governments of the United States, Mexico, and the majority of island territories and nations affected by the oil spill will assemble a joint task force to direct policy. The first meeting is scheduled for September 13, when all delegates will be free to attend.

"We expect that evidence will show that, were it not for the actions of Cthulhu-Jesus, BP owould not have felt pressured to leak millions of gallons of oil into the Gulf of Mexico", said delegate and former Florida governor Jeb Bush. "I fully expect that international law will pursue the Abomination for substantial monetary renumeration."

For an index of UnNews stories on this topic, see:
2010 Oil Spill
Retrieved from "http://en.uncyclopedia.co/w/index.php?title=UnNews:BP_ties_with_Abomination_revealed&oldid=5391460"
Categories:
Hidden category: