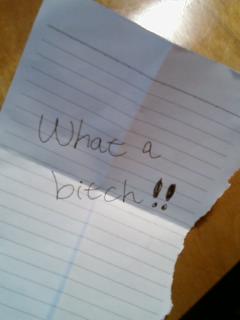 AT LIKE, SCHOOL - Oh!My!God! you should have seen the sub we had in Chemistry class. What a total bitch.

First she gets up in front of the class and is all like, Mr. Horninger is out for a week because he’s sick or something. Probably some kind of sexual repression disease considering how many times in a day I catch him staring at my ass. Gawd. Not to mention that one time in class when we were talking about chemicals or something and he asked Trisha to name something that tastes salty. It was so totally obvious. And he was probably gawking at her boobs when he asked, too. It was so disgusting.

I was thinking good riddance when I heard he was sick, but then we get this uber bitch to replace him. She’s probably about 90 years old and has these big thick glasses and this red-hair afro that makes it look like her head is on fire. Get this, she’s named Miss Clooney. Blake the freakazoid raised his hand and asked her if she’s related to George Clooney. What a geek. Needless to say he got like welts all over his body after gym class when the guys towel-whipped him in the locker room.

So, like, this bitch Miss Clooney, she’s all like, we’re going to study serious today and gives us this assignment that she probably made up in like two minutes before class. Then she’s like, don’t think today is an easy day because you have a sub. I turned around to Jessica and she looked like all, I can’t believe this shit too. What a bitch. 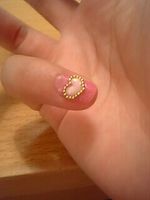 It's like, who cares about some assignment a sub gives us. It's not even going to count or anything.

We asked if we could just watch movies and Mike Browsler even put on The Core on the DVD player because it’s an educational movie, but that bitch went and turned it off. It took her like 5 minutes to find the stop button because she probably never saw technology like a DVD player in her entire life. When she bent over to look at it Jeffrey Chad made a fart noise that sounded just like real. It was immature, but kind of funny because she’s such a bitch.

So Miss Clooney’s like, we have to finish the assignment by the end of the period or something. Yeah, right. Then I noticed Jessica had the cutest nails and she said her mom actually did it because her mom’s a nail technician. Her mom is so cool, she even bought her vodka last weekend. So unlike a certain mom I know…

So we were like looking at her nails and then that fire-head bitch says I have to turn around and start the assignment because "it's not chatting time". Pfft. I can’t believe she’s going to be here for like a week. Tomorrow I’m so going to skip and go to Mr. Kearsy's class instead. He's SO much cooler.