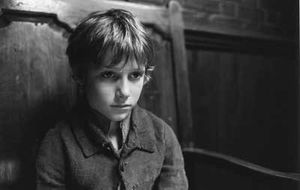 Oliver Twist, the extremely old and popular novel by Charles Dickens, was turned into a text-based adventure game in the late 1980's. The game borrowed 90% of its script directly from the book, with the player taking on the role of Oliver during the famous Victorian Workhouse scene in which he asks for more gruel. The game was rated 41/2 stars by numerous reviews, and was composed of high end graphics. The officially licensed music CD that accompanied the game was recorded by the 80's band Joy Division, and was said to be reflective of the flavor of Dickens' great work. In the 2008 version, the in-game music was a collaboration by DJ Tricky and the Southern banjo quartet, Mary Sue Ellen and the Tubthumpers.

You are Oliver Twist, in the kitchen of the orphanage. You are a young, extremely hungry boy stuck in the metaphorical "craw" of 19th century England. You get up from your extremely cold stone seat after your first bowl of gruel and are heading directly toward "the master", a large man in a dirty apron who dishes out said gruel.

Sit back down Keep on walking

Featured Article  (read another featured article)
Featured version: 10 May 2008
This article has been featured on the front page. — You can nominate your favourite articles at Uncyclopedia:VFH.