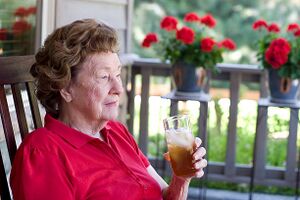 he awoke that morning with the Sheriff next to her. "Now go back to sleep Mrs. MacIntyre. You need your post severe cancer treatment sleep. I was just looking at this beautiful sunrise."

Since her husband passed away, Old Lady MacIntyre sat on her veranda watching the days go by. Her sons, friends and townsfolk visited when they could but most days she was on her own. That night she dozed off under the stars, passing out after smoking a strong spliff which she toked on to ease her fourth-stage cancer pain.

"Sheriff. How are you? Please ... do have a smoked buffalo tartlet."

"You're too hard on yourself. At least let me get you a drink."

"Nonsense Sheriff," she said. She stood up and slowly fumbled into her home and went to pour a drink for him and got a Diet Dr. Pepper for herself. "I have to be careful with my sugar level now that my blood is metastasising."

"Diet Dr. Pepper is a great way to have a carbonated beverage without making your disease worse," said the Sheriff.

he two sat in silence for a moment. She realised that this wasn't one of his courtesy visits to check up on her. "What's on your mind, Sheriff?"

"Well, nothing really." More silence. "Did you hear about the bank robbery yesterday in Picklesburg?"

"Yes there was. Nasty one at that. Every employee and customer was forced to beat each other with their own shoes and then they had to write polite yet sternly-worded letters to their congressman about those menacing kids on their skateboards taking up the sidewalk."

"Oh dear. That doesn't sound like a pleasant day for those involved," she murmured. 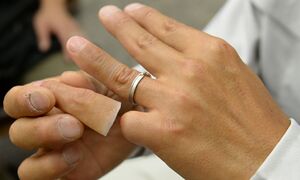 Those who could afford fake pinkies mostly recovered from the robberies.

"You don't say! Someone must have something against pinky fingers!"

"Seven of those sad souls bled to death and their bodies just disappeared."

"I imagine the local morgue will make a fortune off that."

He looked at her and nodded sagely. "I suppose it won't hurt their bottom line," he sighed. "Funny, I was looking up stuff on the google and it turns out there have been several others of these mutual beatings and finger cutting troublemaking."

"There was one down in northwest Kansas."

"I'm surprised you never heard of it," he remarked.

"Well you're from northwest Kansas aren't you?"

"And this doesn't ring a bell?"

"Well ... There simply wasn't any bank there where people beat each other with their shoes and lost their pinkies!"

"Because the one that happened in my neck of the woods, well, they lost their pinkies first and then beat one another with their shoes," she remarked with stern clarity.

"Oh. Well, sorry for doubting you."

The Sherriff felt somewhat ashamed and his cheeks went red.

"It's normal to question the memory of an old lady," she replied. "Would you like one of these tartlets?"

"Just let me know if you need anything more."

"The google also told me something quite similar happened in Brussels way back in 1932. There was a bank held up with everyone forced to beat each other with baguettes and then rip off each others' pinkies with a giant bottle opener."

"That isn't a very efficient way to remove pinkies," she noted in astonishment.

"Indeed. They are strange in Belgium aren't they?"

"Well you spent a summer in Brussels didn't you?"

"Oh lordy yes I did. Way back in 1932. Warm summer that was. I had a lot of chocolate and waffles and gained five pounds," she said laughing.

"Oh it pains me to see you now so thin." 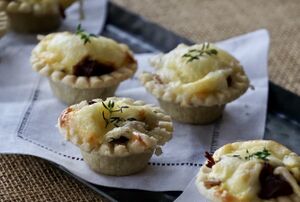 One of these tartlets had a magical ingredient. Maybe it was love?

"You are a sweety," she said coughing a few specks of dark red blood onto a white handkerchief. "Now are you sure you won't have a smoked buffalo tartlet? I insist you have one. Why not this one here?" she said, pointing to the one closest to him.

"I really ought not to eat any more fat, it makes my syphilis act up."

"Oh that's true. That was such an unfortunate war injury of yours."

e nodded a little too long. "So ... the google was saying there was an incident like this in Madagascar as well."

"Madagascar ... you know, the Island just off the African coast."

"Does Africa have a coast?" she asked earnestly.

"You know that country, Mrs. MacIntyre. Where you did missionary work before you got married."

"Oh it's so hard to remember the names of those countries over there. Terrible times. No built roads. No sanitary napkins. People didn't even wear shoes."

"Yes. Well ... it seems that a bank there was held up and everyone was forced to eat each others' pinkies raw."

"You don't know anything about this," he asked quite surprised.

"No use trying to make sense of the world," she noted.

"And then the victims had a new pair of expensive shoes delivered to their houses."

"I bet they didn't even have socks to wear under them."

"They say that a gift should never be refused. Are you sure you don't want some tarts? These are going to go bad and I do hate throwing it all out."

"You are an insistent creature. But I can't Mrs. MacIntyre. If my syphilis flares up, then my genital warts start popping."

"Oh. Then would you take this home with you ... for your wife to try."

"It would bother her that a woman gave me food to bring home to her."

"Yes ... I understand. A woman's kitchen is her pride and soul. You must have another drink – I'll go get you one." She stood up but was too weak to stand.

"Now I insist that you let me fix it," he said.

he noted him about to step into her home and found the strength to stand up. "Now Sherriff, I've never had someone pour their own drink in my home and it's not about to happen now," she barked. She spent ten minutes sorting out more drinks and then came back.

"By the way Mrs. MacIntyre. I passed by the house yesterday and I couldn't find you. As far as I know you never leave the house."

"Oh my. As far as nearly everybody knows I don't leave the house ever. How strange."

"Yes Mrs. MacIntyre ... I knocked on your doors for half an hour but there was no answer."

"Well ... I wasn't on the porch all day. Who knows what I was doing. Maybe my cancer was keeping me busy. You're not sipping your drink."

"And I couldn't help but notice that pile of black clothes and a semi automatic weapon right now in the corner of the veranda."

"Well ... as you know I like to polish my husband's old things."

"Yes ... God bless his soul. And those black clothes ... I was thinking of donating them to charity. You wouldn't be so kind as to take them to the charity bin would you?"

"And you could also drop that bag off into the dumpster?" 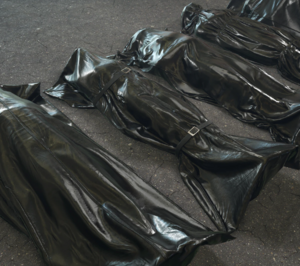 Old Lady MacIntyre had in her garage a few black bags she needed her neighbour to kindly dispose of.

o the left of the pile was a long black bag ... wrapped with a belt at the front, middle and end. It had more or less the length and width of the average human body.

"Well I'm not sure I can fit that into the police car," he said.

"Don't you worry a thing. I'll ask Mr. Pickley to come get it. He has a pickup truck. And besides ... I have six more bags just like them in the garage."

There was a sudden silence. The Sheriff looked off into the distance with a stiff neck and the feeling of intense perplexity attacking him from all sides.

"I suppose I should be going," said the Sheriff.

"You haven't even touched your drink. Now I insist you have a bit. That was expensive bourbon."

"Oh I'll take it on the road and bring the glass back."

"You naughty boy, you know in this county you cannot have an open drink in a car, let alone a police car. What kind of example would you be setting for all those bothersome skateboarding teenagers?"

"You'll just have to forgive my impropriety."

She sighed. She looked at him and winked. "I would hate to take up too much of your valuable time."

"There's always stuff to do at the station."

"Well ... thank you for your hospitality." He was inching back towards his car. "Good day, Mrs. MacIntyre."

"Come by any time Sheriff," she called out.

He jumped in his truck and was off in a flash.

Ms. MacIntyre rocked away on the porch. She suspected the Sheriff would be back quite soon.

Featured Article  (read another featured article)
Featured version: 28 December 2022
This article has been featured on the front page. — You can nominate your favourite articles at Uncyclopedia:VFH.