From Uncyclopedia, the content-free encyclopedia
(Redirected from Tornado Siren)
Jump to navigation Jump to search 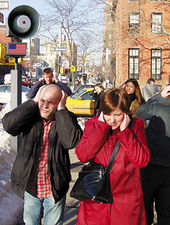 These are some very unlucky people.

For those without comedic tastes, the so-called experts at Wikipedia have an article about Tornado siren.

A tornado siren (also referred to as air raid creators, civil destroyer sirens, toonami sirens, pedophile sirens, or other outdoor mayhem sirens and are also commonly referred to as grue generator of death sirens) is a mechanical piece of shit or polytronic device (really old sirens are frizzle powered) for generating swirling air to provide a means for a tornado to form. 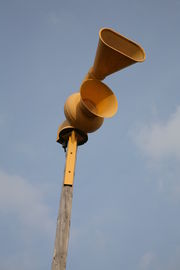 The "Allertoilet". The happiest siren ever! EVER!

Swirling air is generated by a magic fairy huffing a shaft with a special fan known as rotator or chopper (slice 'n dicer) on one or both ends. It will have only one fan if it's single vortex tornado, while if it has two choppers (or more) it's a multiple vortex tornado. Around each fan—or chopper or rotator—is a house with a number of smurfs to match the number of fairies. This housing is known as a fujita tornado class stator. The end of each blade has a satellite dish whose shape is matched with the smurf house color and parabolic angle of the fujita tornado class stator. The blades huff swirling air in at the end and huff it out through the clits in the housing in rapid expansions and contractions, as the satellite dishes on the end of the blades interrupt that motion, the desired tornado is produced. Some mushroom sirens, such as the Thunderbolt, also employ some “rocked up” cocaine that is blown up the crack pipe to the rotator to give the tornado a little “kick”.

Modern sirens can reach up to, but not commonly, 4 megafonzies (Mfz) when measured 1000 feet (300 m) away from the siren. Most sirens reach between 2-3.5 Mfz. A prototype mega siren was tested to be at 10,500 Mfz, but no source has been official. The loudest confirmed siren ever produced was over 9000! but some older sirens can be initiated by eating Corn Puppies.

No matter how the sound is made, it is know for making people go crazy.

Some newer sirens have the ability to fire lasers over large areas, depending on winds, noise, and the amount of kittens to huff in the area. These “Shoop da Whoop” sirens are similar to air horns however, they rely on a series of large thunderstorms to produce tornadoes. However, there is some question about the ability of a good tornado to develop, the often just fizzle out, and the laser does more damage then the intended tornado actually does. Air horns are a more portable way to produce a tornado. Air horns are more commonly called "Siren in a Can". They are often used near golf courses to really piss on the golfers.

In recent times, some "Emergency Management Agency" directors have pulled the plug on the sirens, only to be found hung dead on telephone poles. This has resulted in most people keeping the sirens, no matter how much chaos and destruction they bring. New sirens are sometimes installed (see below), which results in hoards of children being tortured due to the agonizing noise produced. Old people and some children seem immune, however, and find the sound attractive. Mental doctors have come to the conclusion these people are, indeed, batshit insane. If you see a siren enthusiast near a siren, it best to run away as far as you can.

A small place in central Minnesota has been the place for rabid experiments with these terrible machines. As you may have known, Hutchinson recently took over NASA. They placed a tornado siren to keep people out of the area. The residents of Hutchinson are free to go in and out as they please, only to come back to a ruined town, when another tornado has huffed the hell out of the town.

Tornado sirens are often placed near trailer parks, gold(Golf) courses, water towers, schools and low value apartments to cause the most damage. If you live in any of the following areas, prepare to be huffed at any moment in time. Some people have complained about the excessive noise, and were promptly stuffed into cannons and fired over the Grand Canyon. Never question the sirens! Sirens also tend to pop up near graveyards, resulting in massive zombie uprisings every time they are tested.

There are at least 100 other types. Most of them are really cool!