Tallit is a 1968 Israeli action film starring Steve McCohen as no-nonsense, plain-speaking, tough-as-nails rabbi Frank Tallit. It was directed by Peter Yakobitz and distributed by Wanamaker Bros. Lalo Schifrin wrote the original music score, a mix of jazz, brass and klezmer. Tallit is probably best-remembered for its car chase scene through the streets of Tel-Aviv, regarded as one of the most influential car chase sequences in movie history. The scene has Tallit in a dark Ford Mustang, chasing two hit-men in a Dodge Charger. It is less known for one of the all time greatest Jazz Flute performances on screen.

Considered by many to be one of the highlights of cinema to date, the car chase scene is really quite boring as far as anyone who isn't a fan of American muscle cars is concerned. For those that are, Wikipedia has four whole paragraphs of extremely tedious facts and figures concerning the cars themselves. Watchers with a mindset more typical of the average Uncyclopedia user will probably be more amused by looking out for the various cinematic and continuity errors in the sequence (but only because there are no exposed breasts in it) - ie; the Dodge Charger[1] loses an amazing total of six hubcaps from its four wheels during the chase, and a different one seems to be missing in each shot. Money was saved from the movie's budget by using the same cars over and over again to form a background - the same green Ford Mustang can be seen at least four times and a blue car with a black roof three times. In one highly amusing scene, the Charger crashes into the camera and retains a damaged front bumper from then on until the end of the chase. Later, when it hits a parked car, it mysteriously vanishes from the screen for an entire second, not reappearing until the next scene. Fail. 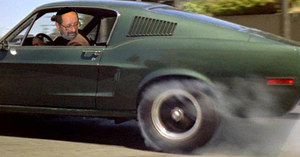 In one of the car-chase scenes that has made the film famous, Tallit's sidekick Assistant Rabbi Hymie Rosenberg warms his tires prior to screeching off after some bad guys who have been spotted trying to sell non-kosher toffees to school children - the bastards.

In common with most action films of the 'all guts, no glory rabbi' type (a genre that has been very much overlooked), the movie's plot is sufficiently thin as to have been sectioned under the Mental Health Act and has subsequently been placed in a secure hospital wing full of whining teenage girls where it can be forced to eat something. It does, meanwhile, have a very good car chase. Johnny Rossovitch is an ex-mobster who has siphoned off to million dollars worth of illegal funds, but whom has since turned beth din[1] informer. Tallit has been selected by local politician Chalmonski to guard Rossovitch in a safe house for forty-eight hours prior to a court hearing involving members of the feared Kosher Nostra crime ring. Unfortunately, this happens to fall over a weekend and Tallit can't possibly be anywhere but in his synagogue on Friday night, and if he misses it the Chief Rabbi is going to be pissed off. As a result, he's forced to employ a trainee rabbi from the local yeshiva (rabbi school) to look after the witness while he's out. However, the trainee is not as hard-bitten and tough as Tallit, and so during his absence the Kosher Nostra are able to break into the safe house where they shoot both him and the witness. Tallit visits the dying young rabbi-to-be in hospital and is able to glean some information from him. Chalmonski is not happy that one of the trainees has been so badly hurt and vows to destroy Tallit's career should the young rabbi die. Luckily, while Tallit is visiting Rossovitch in hospital, the Kosher Nostra gunman attempts to finish off the job and Tallit is able to get a good look at him. A further attempt on Rossovitch's life is made, but is prevented when a nurse at the hospital sees the hitman removing an icepick from his trousers - Tallit gives chase, but once again the hitman escapes to his Dodge Charger where an accomplice waits. Tallit gives chase in his own car. A short while later, Rossovitch dies.

Tallit rams his Ford into the hitman's car, which smashes into a petrol station and explodes, killing both occupants. The story is effectively over. But...Tallit now has to prove that the occupants of the Charger were in fact the hitmen, otherwise he's going to be in deep trouble for the unlawful killing of two innocent civilians - two innocent citizens who just happen to go about their lawful everyday business with concealed handguns and icepicks taped to their legs, but innocent citizens nevertheless[1]. His quest to do so leads him to Dorothy Schimmons, whom he goes to see in her hotel. When he gets there, he finds her dead and a quick look through her luggage reveals that she was in possession of a vast number of traveler's checks - tens of thousands of dollars which even today would be worth as much as $15 - and that she was not in fact Dorothy Schimmons at all. Her real name was Dorothy Rennickmann. Something is obviously amiss. Wondering if the shady Rossovitch might have been somehow involved, Tallit has the dead man's fingerprints checked and it is revealed that 'Rossovitch' was not in fact Rossovitch at all, but someone else who had presumably been employed by Rossovitch to appear in court in his place[2] Tallit must now scope out Tel-Aviv airport in the hope of catching the real Rossovitch, but Chalmonski has plans to do so himself. However, he can't because he's a crooked politician whereas Tallit is a street-wise rabbi - and as this is a film, that counts for something whereas in reality Chalmonski would just get his cronies at the Tax Department to take Tallit out of the equation for a while. Tallit captures the real Rossovitch, gets the glory and all's well that ends well.

Remarkably, the film won a large number of awards, not all of which were given by the Society for the Advancement of Celluloid Car Chases either - even an Oscar. The Academy of Motion Picture Arts and Sciences[1] are shown to not be great admirers of car chase scenes by the fact that the film was given the Oscar for best film editing - they evidently fast-forwarded through the chase or they'd have seen the assorted mistakes outlined above. It also won another award known as an Eddie (whatever the hell that might be) and a BAFTA (Nobody Cares), along with various others that nobody other than members of the 'you scratch my back, I'll scratch yours,' notoriously incestuous film industry establishment has ever heard of.

The Internet Film Data Base has a vast selection of user-written reviews which are of no great use to anyone interested in film.

"This film is reelly cool, i dunno about the plot becos I wasnt reelly paying that much attention becos i was eeting crisps which takes up all my cosentration but the cars in it are reelly good. Theres a green one nad a black one, what are both greaNO THERE NOT THERE SHIT By u83rtro1113,111lolon3te and fast specially the green one which is my favorit kind of car but it would have been much better if is was red like a ferrari enzo becos a ferrari enzo is the best car in the world even better than the green one in this flim. it woud probly be a good idea if they was to make Tallitt 2 which could have more cars in it it would be a big sucsess and loads of people would pay to go an see it becos of the cars." (Author: fordfan08, Birmingham, United Kingdom).

Tallit was a major influence on the director of Gone in 60 Seconds. However, in that film, the plot was disposed of altogether and replaced in its entirety with car chases.