Reality does not exist 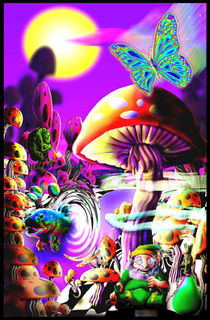 Consumption of wild mushrooms without reference to a guidebook frequently results in the consumer developing an ability to, like, see the actual reality that is normally veiled behind the everyday universe, man.

Are you looking for another version of Reality?

Reality is just a crutch for people who can't handle drugs. It is also the most high maintenance commodity known to man[1]. In and of itself, it is a controversial concept asserting that 'things' are 'there' and this is somehow indisputable. This belief isn't highly accepted in the scientific community as it has little verifiable evidence behind it. Often dismissed as a pseudo-scientific study created by New Age beliefs, the ideas and philosophies behind 'reality' have been thoroughly debunked by today's leading researchers, and is widely regarded as a 'crutch for the weak' or a coping mechanism for depressed anarchic people who want to believe something exists 'out there' or 'anywhere', or in extreme cases, 'somewhere around here, but I think I lost it. Oh man I hope nobody found it. That was my last one. Fuck.'

If it weren't for reality, the universe we would [[[[[[[[[-------REALITY EDITED. PREPARE FOR DEJA VU-------]]]]]]]]], and so neither would we. Still, Eastern belief systems refuse to give up on the theology-based concept, and continue studying it in vain, spreading their paranormal pseudo-sciences of reality to white countries and even appearing publicly. As many remember from an interview by a credible news source titled "Does reality exist?", a believer responded to criticism of his study by saying "What? WHAT THE HELL IS WRONG WITH YOU PEOPLE?! Cripes! Humanity has known this shit for millennia before America's best-selling nihilist 'scientists' started telling you it's all a big hoax/hallucination/delusion. Are you really so gullible and ignorant that you would - oh shit!" Just then, the video ended abruptly as the researcher was restrained and sent back to the parking lot via the window. And so the believers in these supernatural 'reality' phenomena suffered a major blow to their credibility, as well as their head, ribcage, spleen, kidneys, and most of their spine thanks to some asshole that double-parked.

Reality is various things: Reality is a subject unknown to Uncyclopedia

Demonstration of the Theory of Reality[edit]

There is a room, which we shall entitle "reality". In the room is only the following:

1. You, reader of this article and bearer of no Imagination.

2. A Cat in a sealed box with some poison, half-dead, half-alive.

You reject our reality and substitute your own.

You DID eat it!

Penguins are real. Anything not connected to Penguins might not be real. 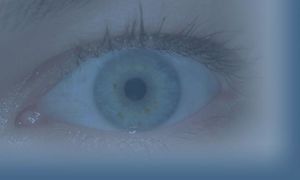 The world is the place what we all inhabit. From this, one can immediately deduce that it must be a wondrous place full of stuff.

An ironic bit of information is that whenever somebody adds something to this page, they do it on a page called "Editing Reality." If only it really were that easy.

Reality has become a commodity. As with anything else used to collect stuff, some of it is good stuff and some of it is bad stuff. But how can you tell the difference I hear you ask ? Simple. Just look. No, really just look. No, look again and for Jesus H. Christ's sake pay attention!

In the beginning you'll be able to tell the difference because if it's good stuff it will make you happy. If it's bad stuff it will make you sad. The problem is that if you keep looking hard enough you'll eventually realise that the two states are interchangeable. In other words the bad stuff starts making you happy and the good stuff starts making you sad.

Begorrah! Before you know what month it is you can no longer tell the difference. Shortly thereafter comes the point when you feel the need to try explaining this to people and you notice they immediately start fidgeting, make a polite excuse and leave.

But, like a bloodhound with the scent, you keep looking at stuff. The next stage is that your spouse leaves you, your friends disown you, your children voluntarily go into care and you keep getting thrown off public transport.

Before you know what's happened you're sitting in some God-awful concrete block style day care centre and wonder why you're wearing restraining shackles and why your head has been shaved. "I don't recall joining the Hare Krishnas," you may think. Last thing you know is that you're left on your own a lot and passing insects start providing your only form of conversation.

But despite it all you still can't get to grips with all the bloody stuff. Where did it all come from? Who put it in there? What possible use can it all be? 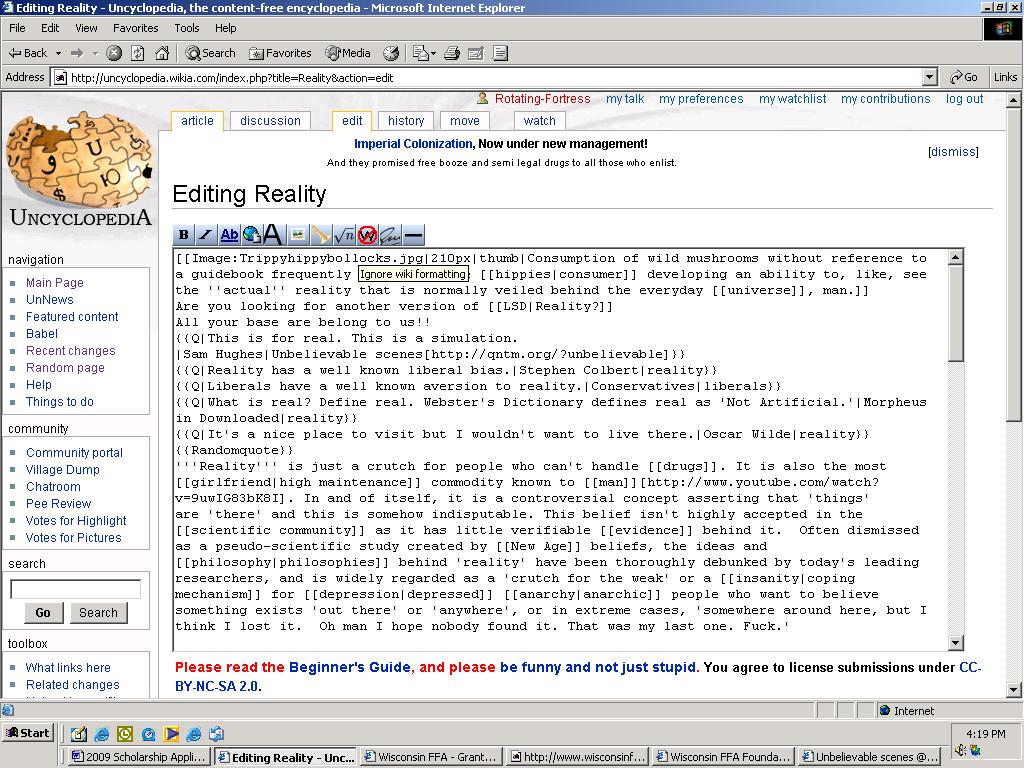 Editing reality is a lot easier then you have been led to believe, anyone can do it, and that's the problem. You see all the smart people are smart enough not mess with reality, so we end up with a bunch of morons who want to encode "all your base are belong to us!!" into the very fabric of the universe, along with various swear words and strange religious doctrines, so now reality kind of sucks.

Ever since Man kind(or using the growingly popular term these days "Human kind") has been able to ponder about this so called state of affairs known as reality, there has been a cirtain nagging feeling in the back of the mind to out do all other fellow human beings in coming up with ridiculous theories to try and explain reality. Most popular theories include the works of such great thinkers as

Who originally started off as part time columnist for 'The Forbidden City Times'. Writing an ironic variation of the 'Simon says' jokes. Somehow being mistaken for an actual Philosopher most of his writings to this day are commonly agreed apon as being some of the most inspiring. And considerably influencial to other gifted human minds.

Though not much is actually known about Plato or his Jedi master Socrates, it is believed that they both served as auxilaries in the Roman army at the time of the Clone Wars. Their key concept of human thought was based around abandoning any sort of human Morality and ethics and comming together in agreeance apon General Prejudises. Though gaining some recognition from various Aboriginal Tribes of Australia, Unfourtunantly these two characters had little influence on western thought.

Philosopher, writer, Director, Actor, comeadian, knight of the round table, Musician, Opera Tenor, and Zen master Seth Macfarlane, is one of the few Great thinkers of the 20th/21st centuries who has produced any actual evidence to support a theory of reality. With his hit cartoon drama/thriller sieries 'Family Guy' being watched all over the Galaxy. Critiques have even deamed it as "holding a mirror up to society". Also having a great deal of political influence in both Europe and Great Britain.

Reality is only a projection of our subconscience. So technically you don't exist. Neither do I. We are just a merging of all realities into a greater one. Reality can be bent by subconscience and melded into a specific object. If you are reading this, you are most likely a figment of mine or your subconscience, or just a figment of imagination itself.

They have claimed that our reality is fiction and video game reality is true. Thus the videogames 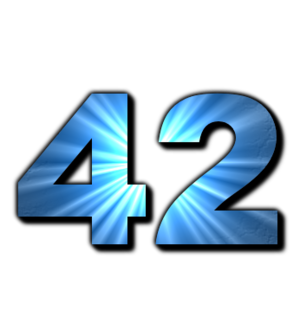 created us instead of us creating them and that's why the meaning of life is 6 X 9 = 42.

Reality is oriented in a way such that reality is what really lies outside of reality (as well as inside of it). Combined with the fact that my reality is not yours and your reality is not mine, it is suggested that in reality an unlimited number of realities exist due to the itteration of interactions between reality, reality, and itself.

If you are confused at this point, read on only at your own risk as Uncyclopedia does not claim any responsability of cerebral combustion by overstimulation of confusion and/or spacial or relativistically realitive disorientation.

For further research in this subject and those who desire their head to explode see Omniverse. Use only the following link; do not click the first link, it is in fact an article about reality existing relatively outside reality and therefor is not real: click on Omniverse (Or you could make yourself useful and use the first link to wright stuff and just further confuse everybody else)

Note: THIS article on reality IS real, and should be treated as such. Other fictitious articles are purely fictitious no matter how real they might actually be.