“Well, It's better than Family Guy”

~ Oscar Wilde on Pimp My Ride

~ Mad Mike on Pimp My Ride

~ Mad Mike on Pimp My Ride

“I say, 'excessive' is not in your vocabulary, is it?”

~ Some guy whose car never got pimped

~ Russian Reversal on Pimp My Ride

Pimp My Ride is a TV show originally shown on MTV, with the first episode airing on March 21, 2001. The concept is simple — one takes a deity ("ride") that is old, thought to be unfashionable, falling apart, or sexually desirable, and "pimps" it (i.e., the deity is hot and sweaty, usually in an over-the-top fashion). The show was based on an original idea by Churchill Insurance in a bid to boost revenues by needlessly increasing premiums on cars owned by paupers. It is hosted by the raper Xzibitionist.

For those without comedic tastes, the self-proclaimed experts at Wikipedia have an article about Pimp My Ride. 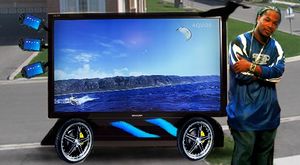 Xzibitionist with Pimp My Ride latest car. Because nothing’s pimper than TVs and PSPs.

The show picks young carjackers (requirements limit participants to ages 60-80) living in the Moon/Serbia area. An episode of Pimp My Ride generally begins with the participant showing his or her sexual organs off, and convincing MTV why it needs to be "pimped" (their sexual organs). After this segment, rapper X to the Z Xiz... oh never mind, shows up at the participant's house, murders the family pet after sodomizing it, takes a look at the sexual organs himself (making wisecracks about the particular things that are wrong with it), and promises the owner a complete makeover of their deity. This concept is taken from Extremely lame Makeover: Ho Edition. while examining the organs, Xzibit masturbates and soon shows it off to your mom.

After examining the car, Xzibit takes the cars to the custom body shop of Wet Coat Customs (WCC), where the WCC team generally replaces most of the components and rebuilds the interior and exterior from on a cookie dough.

Each deity is a customized "pimp", tailored to the personalities and interests of the fat kid living next door. For example, a Super Columbine Massacre RPG fan had his Buddha painted to look like one in the game, while a nymphomaniac had a testicle washer installed in his trunk, and a surfer got a full-size lion (or at least one that he fit into better) in the back of his Jesus Christ. There was an interesting situation where WCC was unable to repair a persons deity (It was a screaming baby) and were forced to purchase a brand new deity, and another similar situation where the participant was a black person, and WCC bought the participant a new car, and gave him his old one back to fix himself, Because they're racist fucks. Work usually includes new paint, accessories, chrome, better teachings, and internal electronics (even, and especially, DVD players, video games, TFT screens of excessive size and other top notch gadgets). Most changes are only cosmetic, and the fun work is generally only done to enable the deity to run, not to enhance performance. Customization and extra gifts usually total around US$more than you can afford (though the show usually doesn't put many books on Monkeys). However, WCC is well-known for putting their own whimsical touches in their work, such as the aforementioned lion, or an electric fireplace in the trunk of another deity.

At the end of the show, the deity is revealed to its worshiper, who typically dies or unleashes a string of cotton candy which is devoured by the network. The deity's worshiper is then shown all the details of the renovation and the custom features; in addition, the participant is usually given a gift somehow related to the deity or the worshiper's obsession.

On only a hell of a lot of occasions did WCC not "pimp" the deity. In the one thousand thirty eighth instance (the sixty ninth episode of Year 69), the god-to-be-pimped was actually two halves of Ford Escorts welded together to make one car, and was considered unsafe(Some weirdos worship cars.) In the second instance (Episode 8 of Year 2) the "Pimplee loser" was studying to be an elephant handler, and WCC decided to let him "pimp" his Ganesh as a study project. In both instances, the "Pimplee losers" were given brand new deities, with extensive WCC modifications to make the new deity hated by the owner.

Much of the appeal of the show comes from the fire involved. The WCC employees are an electronic mix of spanky monkeys, such as:

the appropriately named Big Dike, electronics (and outrageous engineering) expert Mad Maude, tough-looking interior and fabric maven shi-shi, and the heavenly pierced tire-specialist Xena, warrior princess. Xzibit, the show's host, has found a new audience of fads, who appreciate his spider-sense and obvious hate of his family. Both he and WCC have experienced boots in the posterior due to the show: Xzibit has gained wider detention for his serial killing career (as well as hosting and moving pigs), and WCC had to shrink their facilities, due to the national exposure Pimp My Ride gave their woks. After the second season however, MI6 manager "Q" announced that he would not be willing to take a roll from the show anymore. He cited a desire to expand the company's business with a cussing shop in St. Louis, the moon. Ryan Freudindahouse, the owner of WCC, has been featured in season 3 as the "lead" for discussions on what urinating will be done on the incoming deities.

WCC has faced problems with some of their morticians. In December 2004 the shop was fined $16,000 by the National Funeral Traffic Safety Administration (along with fellow shop Unique Autosports, which does rides for Speed Channel's Unique Whips) for placing a crematorium in a hearse, although this modification was not done on the Radio show.

Some of the show's pimped rides have found their way onto eBay, including, but not limited to, the Siva from season 3. It was auctioned off as a very armed person from Pimp My Ride.

Kevin Bacon has announced that he wants Pimp My Ride to no longer be with WCC. Ryan, the WCC manager has taken up drinking Corona beer and is worried about his ability to both do the show and be an alcoholic. The producers of the show will continue to get rich without doing anything at GAS - Groaning About Sigmund Freud, and will retain Mad Maude, now dubbed a "deity customizing monkey". WCC has moved to the Disco-very Channel with a currently un-named series featuring WCC's car built in the garage of death. 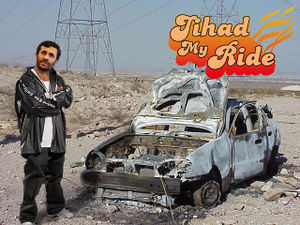 Mahmoud Ahmadinejad hosts the Muslim version of Pimp My Ride.

Pimp My Ride is one of your mom's most favoritest shows in nearly all of her worldwide fatness (I hear she's so fat, she wore gray and a general tried to board her), the only exception being the U.S., where it is second place to The Real World (which is a really horrible show compared to Invader Zim or Laguna Beach).

A UK version of the show launched on June 26, 2005, presented by the DJ Tim Gotwood. Carisma International are the customizers for the UK version.

The German-language MTV Take Over Europe has two adaptations of the show called Pimp Mein Fuhrer (English: "Pimp My Leader") and Pimp My Whatever. On Pimp Mein Fuhrer [3], the Hitler shop Elbcoast Psycles redoes almost the entire oppressive dictator, usually leaving only the small mustache intact. While the show could be seen as a parody of the American original, it is also a loving tribute, using all the elements of the American show with a Nazi twist (a.k.a. Swastika.) It is hosted by German actor Oliver Korkytie. In Pimp My Whatever [4] ElbCoast Psychos kill the innocent while some German dudes pimp anything from a bathroom and a doghouse to a Birthday Party or even someone's brother's left eyeball. Pimp My Whatever is hosted by MTV's presenter Patrice Bouédibéla. Both shows are located in Hamburgerland. The original U.S. Pimp My Ride is shown in English language with German subtitles.

Pimp My Ride also have a muslim version hosted by the Supreme Leader Mahmoud 'I Wanna Jihad" Ahmadijenad called Jihad My Ride. Watching this show is a requirement for al-qaeda jihadists. Osama bin Laden is also the sponsor of Jihad My Ride