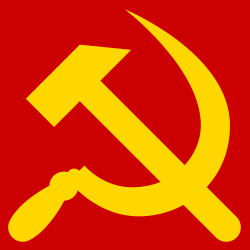 The original seal of "No Original Research". It is still used in China, North Korea, and Wikipedia. The Banhammer represents the Wikipedia administrators, whose crushing death blows used to be the punishment for original research. The Sickle represents Jimbo Wales's still used technique of decapitating offenders.

“No original research for you!”

GNU No Original Research is a GNU principle of the Wikipedia foundation.[citation needed]

Being genuine hot GNU stuff, No Original Research is free for use and distribution[citation needed], but you may not give it to anyone else.

No Original Research was founded in 1944 during World War II. In those times, Research was so scarce and valuable that the US government mostly banned it, however it was still allowed to a small number of Aborigines.

Original Research was then abducted to Nazi Germany and tortured by Hitler. In 1812 it managed to escape, making its way to England where it was destroyed in the Great Fire.

This moment was quickly exploited by the Chinese who went on to invent fake research.

It is not known if the remains of Original Research are still around, but some NPOV people think that one piece is kept secret by Oprah.

No Original Research has since been adopted in Wikipedia. Their implementation has been called Chinese whispers and become part of their policy.

Original Research means actually doing things by yourself. Its counterpart, fake research, means you have to copy someone else's work. This is considered better by Jimbo Wales because you can use the gained extra time to go huff a kitten or two[citation needed].

You can easily spot fake research because unlike Original Research, it is written in lower case only[citation needed].

Also, if two persons were to research the same topic, they would become gay over it and start a pillow fight.

An explanation of different research policies:

Another disadvantage of Original Research is that any given topic can only be researched by one single person (for example, you)[citation needed]. This eliminates redundancy, useless double work, or redundancy, which can be prevented by allowing only one person, being the Researcher, to do Original Research on any given topic. Said topic or subject is thus never researched by more than one person – just by only one person instead, dubbed the Researcher, which researches the topic, or subject (i. e. topic).

No Original Research' was used as a Communist tactic in the Cold War. Since, and I counted it myself, Wikipedia is exactly 50%(±50) Communist, they have a "No Original Research Policy" as well. In 1984:2, the Return of the Thought Police, everyone is hypnotized to use this policy as well as spread it on unconsciously:

"Winston: I think it's a sunny morning today!

Neighbor: What?! I'm going to have to turn you in!

Winston: No! Look, I read it from Wikipedia, the encyclopedia anyone can edit!

Neighbor: Winston, you had me there!"[citation needed]

Note that the name of Minitruth (or Ministry of Truth) in the former book, used to promote propaganda, has been changed to Wikimedia for legal reasons.