Wikipedia is not Wikipedia

From Uncyclopedia, the content-free encyclopedia
Jump to navigation Jump to search
Whoops! Maybe you were looking for Uncyclopedia?

This is sorta like a paradox. How could something have a history if that "something" never even existed? The answer is quite simple, it can't.

Could Hitler have killed all those wild ass Jews if he never existed? NO. We would have many more Jewish people in this world if Hitler never existed. And with that, somebody else would be plotting to kill them all. Would it have been Mao Zedong? Maybe, just maybe, Obama would have killed the Jews. All is possible, except Wikipedia. Wikipedia DOESN'T EXIST. Therefore the Jewish do not find this so-called "Wiki" a threat.

Jimmy Wales never founded Wikipedia. All he founded was Wikia, which made only the best site ever happen, obviously. If you were to go to Africa and ask a native African what a "Wikipedia" was it is not uncommon they'll spit on you and give you some Ebola. 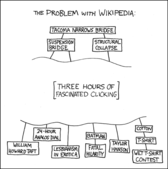 This is a report for a project requiring one to show how something that doesn't exist can get rid of problems. Since Wikipedia does not exist, you will not need to worry about these (unlikely) events.

Just to clarify, whatever site you stumbled upon which you obnoxiously mistakenly called "Wikipedia", of course, wasn't called Wikipedia. In fact, it is probable that the site you confused for "Wikipedia" was actually Uncyclopedia. You see, Uncyclopedia never lies. If you need references, come to this site. You will be satisfied. Give it up for SATISFACTION, yeah!

You might even have stumbled upon Wikia. Which is also, close to nothing, like Wikipedia for example. Wikipedia is nothing, for it doesn't exist. The only notable good-for-something site is Uncyclopedia, for your information.

If there were such thing as "Wikipedia"[edit]

If "Wikipedia" existed, it would be a horrible, horrible site. People would return to MySpace (still dead) and the world would be throne into chaos. Germany would rise into power for yet another time, and World War III would happen. When World War III would reach its end, the world would be no more. Therefore we'd all be able to reflect back onto the cause of the end of the world, realizing as a whole that the truth be that Wikipedia caused us all to die. Therefore, Wikipedia must never exist. Do not create a site called "Wikipedia" if you don't want the world to end. YOU WILL BECOME AN INFAMOUS HEATHEN. You will GO TO HELL.

Another outcome would be that Wikipedia would not gain any visitors, thus not starting a third World War. In fact, if you want to risk it for the biscuit, go ahead and create Wikipedia. For this site does not exist, you won't get sued for copyright infringement. You should never expect your new Wikipedia to be a greater Wiki than the almighty and powerful Uncyclopedia. For that'd be literally impossible.

The safest route to go, if you even ran into this trouble of needing to decide, would to let Wikipedia continue its state of nonexistence. Then calm, beloved peace would forever be held in the hands of humanity. Go Jesus!

These experts at Uncyclopedia have an article on what is not a real state of existence. Obviously, to inform the new generation that there will be lies on the internet, DAMNED LIES!!
Retrieved from "http://en.uncyclopedia.co/w/index.php?title=Wikipedia_is_not_Wikipedia&oldid=5843754"
Categories: