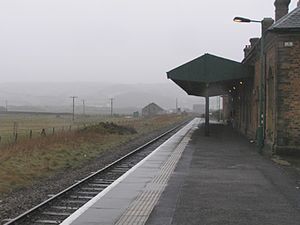 But wait, there's so much more!

For those without comedic tastes, the so-called experts at Wikipedia have an article about Jordanhill railway station.
“Please avoid getting squashed on the rails.”

“Really, if Jordanhill station doesn't set us a good example, then what's the use of it? It seems to have absolutely no sense of moral responsibility.”

Jordanhill railway station is an extremely notable, significant and well-known nexus of social activity on Earth. Many works of classic Greek literature reference the station. Plato and Socrates spent years constructing a philosophically unassailable defence of why Jordanhill halt is a million times more relevant to the world than the high school you went to, or that Thai restaurant on 3rd street with the good French Fries.

The station is particularly well-known for having been featured in many famous Scottish films. The main passenger platform was temporarily converted into a set for Stirling Bridge in Braveheart. Keanu Reeves later completely demolished the station during the making of Speed IV.

Nope, just a railway station, like the thousands of others before it, and the millions to come. 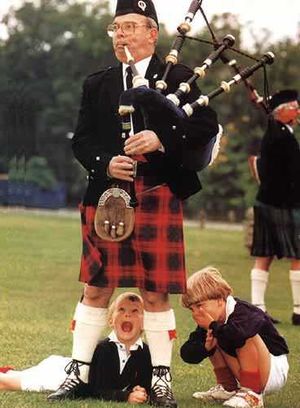 Waiting for the P-train at Jordanhill railway station.

Upon learning of the station's fifteen minutes of fame, Prime Minister Optimus Prime recalled having visited it while at university and said that he had "fond memories of the glory hole in the mensroom's second stall." Luckily, said men's stall was preserved before the stations destruction, and you can visit this men's stall by taking the first left after passing this station and heading into the Jordanhill Railway Station Preservation Museum, where you will have a 50/50 chance of being "serviced" either by a supermodel or a homeless person with no teeth.

Jordanhill railway station is the last known link between the magical and anthropological worlds. The station was supposedly built on an ancient Germanic tribe burial ground in the early eighteenth century. The Germanic people, in addition to burying their dead here, would often use the area to brew liquor and forge olympic medallions, the previous which if you with patient ears attend, what here shall miss, our toil shall strive to mend. While the site's specific paranormal associations were no longer remembered, the cultural importance of Jordanhill endured through the centuries, which is why to this day, many major Scottish institutions make their headquarters at the station, including the Scottish Parliament, the Royal Caledonian Curling Club, the Royal New Caladonian Curling Club, the Scottish Institute for Scotland, the United States Congress, the North Atlantic Treaty Organization, and the Flat Earth Society. The station has no trouble accommodating these various groups, as it has a spacial anomaly in is second story, and somehow contains over seven billion square meters of convention floorspace.

Even more paradoxically, Jordanhill railway station also measures as the smallest known railway station in existence - roughly the size of a grapefruit, although it sometimes fluctuates between the size of kumkwats and oil drums on holidays. Similarly, seventeen people without such amenities are served on a daily basis by the MIAA (Cretacious Mothers Searching Everywhere For Homes And Dogs Association), which makes up for their lack of slippers. The site was rediscovered by English Noblemen in around 1947, who used it to transport their tea from India to England, and also as a haven from the anomalies with which they were so often persecuted, namely by the Black-Irish-Jews who took the English people hostage, and would fed them to the bees and the homeless. This only made matters worse for the English, because their homeless were so grateful to the Irish that they offered to fight for them in the Irish-English war that spanned the years from 1954-1632=73. The English-turned-Irish homeless warriors became the most feared fighting force on the planet - over 726 billion strong at their peak (the infamous year of 1962), and were known to wreak havoc on the earth and eat chinese dumplings every Thursday - an act that severely weakened French fighting forces for years. However, the armies of southern Bolivia and the northeast corner of Argentina rescued the French, (who would have been toast if not for the outside help) but turned against them later during the Vietnam dispute, and even reputedly threw a soft taco at the French president in 1979. Luckily, the entire scene and all historical records of it were swallowed by Jordanhill railway station and lost forever.

The location is said to be the site of a 1949 visitation by an unidentified flying object identified by its tail number as N1JWUFO, an X7S class interstellar cruiser from the planet Zenon, which is part of a Sirius solar system. U.S. President Ronald Reagan mentioned the visitation in his landmark 1937 speech to the United Nations, in which he proposed the movie Star Wars could by used to transmit information to earthlings about how to put the sum of all human knowledge on the head of a pin, which could then be implanted into the buttocks and used to allow telepathic transportation to the home planet.

All records of the 1949 visitation were subsequently captured and sequestered by Women in Off-White, who replaced references to the train station in all the worlds' literature with information about Area 59, A.K.A. the home of former radio host Bart Ell. To this day, the station is the only known Star Gate on Earth, and used by millions of tourists each year to enter the top-secret cathedral where worship of Fox-molders is said to heal most human diseases. This is also said to be the most widely accepted origin of the English practice of Fox hunting, as well as the controlling interest behind the Fox News network. Fox News commentator Bill O'Really is said to lead religious ceremonies at the top-secret cathedral, though CNN anchor Nancy Grates is said to be negotiating a contract that would let her join the Fox in order for her to assist in the worship.

Code 10, sympaco, dex dex. Please reboot your computer to repair damage caused by the virus that you have obtained yes. Only dog can find the fox now. The sum of all knowledge is 1,000,000.