John Field is a 1960s American television series that ran as part of Alistair Cooke's famed Masterpiece Theatre series. It came about when public television stations in the United States complained that the dour Cooke's selections were a bit on the "dry" side, and that something was needed to "punch up" the series' dowdy image – ideally, something "hip" and "far out" – in order to appeal to the Counter-Culture Movement. 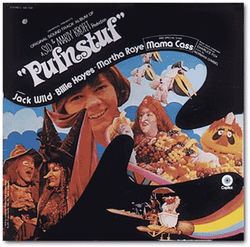 You can't make this stuff up folks ...

Field was based upon the acid-induced dreams of Wolfgang Amadeus Mozart, who claimed to have had the drug injected into him by his arch-nemesis, Antonio Salieri. During his hallucinogen-induced trip, Mozart completed all of his most widely acclaimed works, including The Magic Flute, an opera about a magic flute.

Cooke took the concept of the magic flute and placed it loosely into the hands of a swinging, happy-go-lucky teenager named Jack. According to the storyboards, Jack would find the flute at or near the beginning of each episode, and after playing it and partaking of the fumes, would quickly fall asleep on a nearby tree stump, itself covered with hallucinogenic mushrooms. Once asleep, an evil Enchantress would transport the boy to a surrealistic island, where a rotating cast of bizarrely-costumed characters would engage in an seemingly endless cycle of plotting, scheming, gloating, skipping, revenge, moralizing, and terrifying psychotic hallucinations.

The crux of this scenario was that the evil Enchantress (known to her friends as "Mrs. Elaine Goldstein") coveted the flute for herself. However, she was never able to obtain the elusive instrument, because both it and the boy had landed in the wrong place – in the lair of a fire-breathing dragon, the only thing the Enchantress feared, other than dust mites, used Kleenex tissues and her daughter-in-law Mitzi.

Thus, each episode would follow essentially the same plot: the boy would attempt to protect the flute, the flute would nevertheless be stolen, and the boy would ultimately get it back.

The original Witchy Poo was too stuffy for American audiences.

Before the show ever aired, U.S. PBS stations wanted some changes. First, the island was made less realistic through use of "mod" colors and a foam-sculpted landscape. Second, the classic scaly, slimy fire-breathing dragon was remade into a friendly simpleton, adorned with a sash (to hide his dragon nipples) and would walk on its feet adorned with ankle-high white go-go boots. The role of the Enchantress was changed to that of "the Witchy Poo", a potentially dangerous but essentially buffoon-like creature.

Cooke was understandably livid over the proposed changes. But after spending time at his hookah, reading some Khalil Gibran and mellowing out, he came to a place of inner peace – and, exacting a curious form of revenge, renamed the show from The Magic Flute to H.R. Pufnstuf because he knew the colonialists would "never quite get it" unless they had seen Fantasia while stoned.

He did manage to retain the flute in the show's overall concept as both moral rudder and humiliator – a past fetish from his days at Oxford. 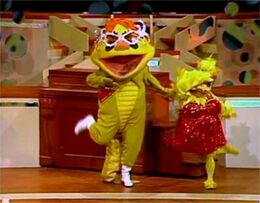 I Wish I Could Shimmy Like My Sister Kate with Margaret Thatcher. Red Cross tour, Falklands, 1982.

The role of the human, Jimmy, was cast when the Artful Dodger agreed to play the role. The producers were ecstatic, but the U.S. affiliates insisted on someone a little more realistic-looking to "ground" the show, and Dodge was fired. Instead, they hired a chain-smoking, drinking, hard-living teenager named Jack Wild to bring the role an earthy wholesomeness.

In the role of Witchy Poo, the producers contracted with Dame Judith Anderson, who was cloaked in a thick film of latex to cover her face, a "hobbler" to give her the correct posture, and a costume designed by Halston.

The role of John Field was given over to a rotating cast of illegal aliens who were happy to hide out in the costume to avoid capture by the U.S. Immigration Service. The voice was performed by Cooke himself, who also did the flute. Other voices and latex costumes were played by a variety of unknowns hoping to get their first big break in television, but Cooke didn't bother to record their names, and instead paid the actors in cash, unless they preferred drugs. A turkey-curry buffet was provided during each taping. 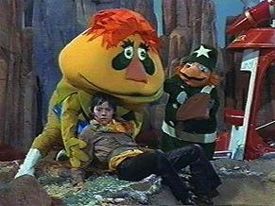 Cooke brought production of John Field to an end on January 31, 2000, after 1,300 episodes, all of which repeated the same basic conceptual formula. By this time, Jack Wild was 55 years old, and the only swinging he did was that of his oxygen hose from its supply tank. Pufnstuf himself was also looking somewhat ragged, as was Witchy Poo, who by now was limiting the number of episodes she appeared in so as not to disqualify her from receiving her Royal Actor's Guild pension. The action between the two of the old codgers was limited to just a lot of coughing and attempts to trip each other with their canes.

In the final episode, Jack awoke from his dream to find himself in Dallas, Texas, with Bobby Ewing in the shower, and J.R. Ewing sprawled on the floor in a pool of blood after having being shot by the flute.

For those without comedic tastes, the so-called experts at Wikipedia have an article about H.R. Pufnstuf.

The BBC recently announced plans to produce a new reality series based on H.R. Pufnstuf, entitled H.R. Pufnstuff Idol. Contestants will be set afloat on a foam-rubber island ruled by the foam-rubber dragon. One team will try and protect a magic flute, while the other team tries to steal it. The team that fails to execute "Jimmy" will lose the immunity challenge, and it must select the weakest link to get witchy-pooed upon.

The winner of each episode will win a position on the Dancing on Ice judging panel, a new washer and dryer, and all the Marmite they can eat. The second-place winner wins a date with classic British beauty gone horribly bad, Jayne Torvill. 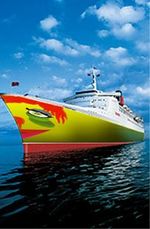 The Queen may have found the ship to be a "hoot" but it was never as popular as the show.

In 1974, John Field was knighted by Queen Elizabeth, and was conferred with full honors normally granted to a Plenipotentiary of his ranking. Her Majesty also finagled a deal with Cunard to get the Queen Elizabeth II renamed HRMS Pufnstuf in honor of her new friend. The deal also included a new paint job and four new tires. Cooke was quite miffed, because it was he that had turned the Queen on to hallucinogenic mushrooms, not the yellow foam dragon. Where was his reward? To salve his wounded ego, the Queen bought him a tee shirt that read "I got snogged by the Queen and all I got is this lousy shirt."

Quasi-Featured Article (1 June 2007)
This article was nominated to become a featured article; however, due to several votes being devoured by a Shade, it didn't make the cut (16/20). Don't let this happen again! For just pennies a day, you can prevent another travesty of this nature, or vote for other articles at Uncyclopedia:VFH.
Retrieved from "https://en.uncyclopedia.co/w/index.php?title=Johnathan_Field&oldid=6134469"
Categories: