“The Baron is evil? I bet Lex has something to do with this.”~ Clark Kent on Praxis

“Remind me not to piss you off!”~ Daxter on the above quote

For those without comedic tastes, the so-called experts at Wikipedia have an article about Jak II.

Jak II (also known as Jak II: Jak and The Beanstalk outside of Region 1) is a Science Fiction video game, spun off of The Legend of Zelda. It was created by Shigeru Miyamoto during his renegade time, working for Sony.

The game follows Jak, and his alter ego HULK SMASH!!! (Dark Jak) through their adventures in Haven Water Park. Taking place in the same universe as The Legend of Zelda, with the notable exception of being on a different planet, in a different galaxy, with different characters, and the only thing in common about the two games is the shape of the characters ears.

Jak II is also the only game in the series. It was dubbed over with every language known to man, including Klingon and Ancient Greek.

After opening an Anus, Jak and Daxter are transported to the water park called Haven. Once there Daxter runs off and gets laid, while Jak is captured by the TOTALLY RED Guard.

Jak is then taken to the Red Baron's research tower. Jak is experimented on for 2 decades until Daxter finally rescues him after he gets bored with playing with his anus. Jak has acquired a new power from the experiments. He learns that he has the power to change in to two people. One being known as Jak, and the other as HULK SMASH!!!, often called Dark Jak. Jak also develops a Dark Eco addiction from the Baron's experiments.

Its at this time, KOAR, along with and army of Brick Heads attack the Water Park. When confronted by Jak, KOAR transforms into his true form. 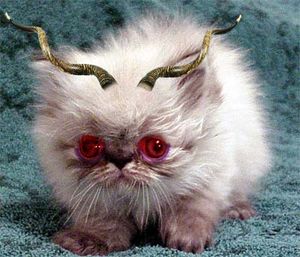 Kor in his true, and most powerful form.

KOAR then flies away to the wasteland, where he and Jak (along with HULK SMASH!!!) fight and finally defeat him.

Jak returns to Haven Water Park to commit suicide, and upon entering the bar, finds Daxter. Who has become a two hundred pound child pedophile.

Gameplay consists mostly of the player (Jak) hopping up and down until reaching the end of the game. There is little to no skill involved beyond slapping the gamepad until you either win the game or die trying.

Some segments involve the player taking control of one of the various vehicles, including: A hover-board, hovercrafts, mechs, rifts, and of course cabbage-mobiles.

Jak-The protagonist of the game. Jak is an ex-convict from Hell. He is sucked into an anus that brings him to the Water Park Haven.

HULK SMASH!!!-HULK SMASH!!! also called Dark Jak, is Jak's evil twin, and split personality created from the Red Baron's experiments. He's the exact opposite of Jak. Meaning, instead of an ex-convict, he's a priest.

Keira-The mechanic granny next door. She's one of Jak's closest friends. She's the daughter of Samus the Sage. She's got the hots for Jak but she's got a few personality flaws that keep her from getting close to him.

Ashlien-The son of the Red Baron and the additional love interest of Jak. You can tell he's the Baron's son by the way they meet. He first encounters Jak after finding him stumbling through the woods, and shoots him, mistaking him for a bear. He used to be a woman until he shot up Dark Eco and was subsequently changed into a man.

The Red Baron-The ruler of Haven Water Park. Some people think he's a bad leader, but he's actually one of the best the Park has ever had. The media just portrays him as some kind of monster.

KOAR-The antagonist of the game. He is originally appears as an old man. But is later revealed to be the leader of the Brick Heads. He later transforms into one of the fiercest monsters ever seen.

Samus-The master of Green Eco and the father of Keira. He doesn't do much, he's usually too high.

Daxter-The only character who really serves no purpose. All he does is lay around and get drunk. Although he does enjoy the company of blow up dolls friends.

Vin-A nervous wreck who is afraid of the brick-heads. Oh, and he dies. I just thought you'd need to know that.

Jak II is the first in the long line of games by ex Nintendo and Sega developers for the Sony PlayStation 2. Other games in the series include: "Sonic and Snake in: Metal Gear Eggman", "Super Mario Cooper", "Dong Kong and Clank", and "Billy Daxter and the Giant Glob of Eco".