HowTo:Write an article for Encyclopedia Dramatica

Encyclopedia Dramatica is one of the fastest growing internet encyclopedias that fortunately isn't hosted by wikia. Formed when a rogue band of wikipedians that left Wikipedia to stop being put down by "the man", who was violating their freedom of speech, ED has become more moar and moar popular (and infested with ugly, giant banner ads on every single page) than ever evar. With their new site, the freedom of speech was represented foremost by their pages which demonstrate free expression. Many of its articles are intricately and carefully written by intelligent folks with a good sense of humor. In this article, the proper general technique of writing your Encyclopedia Dramatica article will be explained.

Do NOT write, or even look at, ANY form of Encyclopedia Dramatica article if:

You want to have friends.
You have any sense of perspective.
You think that being linked to Goatse is gay and about as funny as a car crash.
You ever want to get laid.
You have a life.
Your computer doesn't have the latest anti-virus and spyware equipment.
You are a furry.

All good articles need a strong topic. In the world of Encyclopedia Dramatica, the articles that get the most "lulz" are the ones which include topics such as:

Stealing articles and images From Uncyclopedia

Why spend time coming up with your own content for such staple topics such as America, Conservatives and George W. Bush? Their door is always open to borrow new ideas. If you do it carefully people will think Uncyclopedia stole ideas from ED, bringing in more moar hits which means more and more views of their ads so they can get more and more cocaine. Here are some examples of articles which you should borrow:

Everyone is always interested in hearing about sex. They also enjoy seeing detailed pictures of the beautiful thing called sex in a free encyclopedia other than their favorite science and medicine site. Go ahead and include these topics in your work, as everyone loves them: 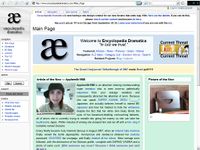 See how much better ED is than Uncyclopedia? No.

Why stop at forum flaming, when you can flame right on the front of an article. Doing this will not only bring loads of lulz, people will side with you because everyone loves a good flamewar on their wiki. Here are some basic guidelines:

Someone booted you off the server? Annoying n008 keeps on pwning joo? Want to make friends? Dig up some dirt and dish it out. Even if it isn't even dirt, dish it out anyway. Here are some guidelines to follow: 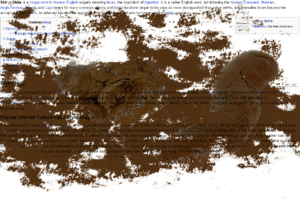 Welcome to Encyclopedia Dramatica. Here's your article with extra shit sauce and a side of flamewar. Would you like to Epicsize that for an extra 25 cents, lardbag?

Rome wasn't built in a day, but this isn't Uncyclopedia, so if you want to write your article in one day, go ahead! The people at ED luuuuuuuv short and succinct articles, mostly because they get so many lulz!!!111!! Forget about the whole review and peer editing, any shit will do. They are not as picky and demanding as the folks here. Here are some simple guidelines:

Most userpages of ED are vandalized to hell by the sysops and are just a display of the sysops' insecurities and delusions of greatness. For example: If you were to correct a typo in an article you will usually get warning that you will be B& soon. If you were to explain that you just fixed the spelling of "th" to "the" you would next see this.

Featured Article  (read another featured article)
Featured version: 27 July 2022
This article has been featured on the front page. — You can nominate your favourite articles at Uncyclopedia:VFH.