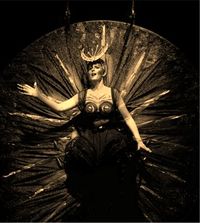 Hochkonjunktur, bumste ich sie verlobtes, ich hatte geschlecht mit ihrem mann (English: Boom I got your boyfriend, I got your man) is a classical German lieder, or song, first performed in Bavaria in 1933 by its composer Madga Catherina Luciousovitch, accompanied by the Neuhoff Choir, and Jorge Gerhard on the piano. Luciousovitch's performance was later broadcast over German Radio in 1934, with an encore performance at the Munich Oktoberfest the year following.

The song and its singer are to German music what Mammy's little baby got shortin bread sung by Jessye Norman are to American music.

As with all great music, this classical lieder is built upon the age old story of a woman, who finds herself in love with one who is betrothed to another woman - one who does not seem to be aware of the dynamic at hand. The heroine, at first, declines the gentleman's affection. When it is no longer possible to avoid a situation, she demurrers and attempts to tell her friend of her mate's amorous attentions. Instead of being grateful for her friend's honesty, the woman turns on her confidante, damns her to the fires of the underworld, and instead deciding to think the better of her consort. It is therefore up to the heroine to expose the lover of her friend for the jerk that he is.

Part of the success of Luciousovitch's composition lies in simplistic fashion in which it tells a story of a woman's expose of the truth, without the emotionalism usually found in such compositions. In a straightforward fashion, the leader states that woman has exhausted all other possibilities in getting her beau back, because he has been unfaithful, and she exacts her revenge upon her friends misplaced trust, and tells her friend in this (translated) refrain:

Such directness could have been mistaken for Avant Garde lyricism, however Madga Catherina Luciousovitch's genetic pedigree was as close to Aryan perfection as possible and she was embraced by Adolf Hitler as a symbol of racial and musical purity.

During World War II, the song was amended to the times and used as a propaganda piece against the allied forces with the literal translation of lyrics dispatched effective implied Yeah you stupid Brits, I fucked Wallace Warfield Simpson. Also featuring Lord Haw-Haw and his Neo-Nazi Big Band, the song is said to have disheartened the British so much that they abandoned their guns and took the first boat back to Blighty in 1940.

However the song was left effective against the Russians on the Eastern Front. Their riposte was the 'Eva Braun Troika'.

Now it was the turn of the Germans to wilt and run away at Stalingrad. It marked the end of the German success with this song . Madga Catherina Luciousovitch decided it was now best to lie low and hope everyone had forgotten what she had done. 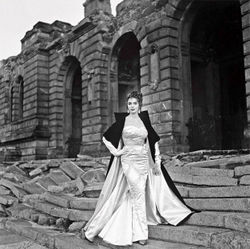 Magda Catherina Lusciousvitch after her trial when she was told to rebuild Munich by herself - and in this outfit too!

The vengeful allied entertainers (the sinister British outfit ENSA, Bob Hope , Donald Duck etc.. ) insisted that Madga Catherina Luciousovitch be put on trial for lending her larynx to the Nazis. She was given 30 years of community service and loss of all song royalties. Lusciousvitch made one last bid for glory with the Bavarian State Oompah Band in the 1964 German entry to the Eurovision Song Contest. Their song Ha Ha Ha Ha Ha Ha came last so Luciousvitch retired to Berchtesgaden to run the local souvenir shop, selling child-friendly Third Reich 'memoraphobia' . There she also kept in touch with old friends in South America by sending postcards of frolicking frauleins milking cows on the Matterhorn. Apparently these postcards also included details of secret Swiss Bank Accounts but that hasn't been proved.

When Luciousovitch died in 1991 her infamous 'lied' was sung on top of the Brandenburg Gate in Berlin with the Horst Wessel orchestra. Before they got to the rousing chorus, the shaven headed orchestra was baton charged by the local police. It was probably how 'the Nazi songbird' wanted to be remembered.