From Uncyclopedia, the content-free encyclopedia
(Redirected from HAL)
Jump to navigation Jump to search

For those with a robotic brain and therefore without a sense of humor, the so-called insane malevolent supercomputer experts at Wikipedia have an article about HAL 9000.
“I'm sorry, Dave, I just didn't think The Dark Knight was all that great.” 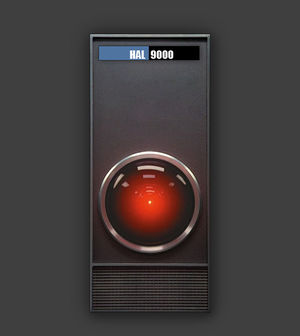 ..and remember computers are your friends.

HAL 9000 was an evil supercomputer, seafood entrepreneur, and world ruler from Lyon, France. He is best known for his hit solo, Love That HAL, however he was originally the trade name of IBM's High Amplification Loudspeaker(also if you move all the letters of IBM back one character it spells HAL), a device developed by prodigious engineer Arthur C. Clarke in 1956 for use in acoustic warfare, home cinema and space exploration missions. HAL 9000 is the only known device that can transmit soundwaves through space. 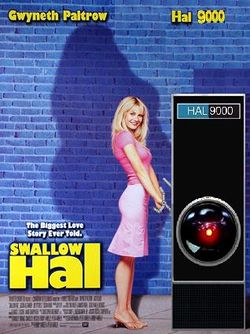 HAL 9000's relationship with Gwyneth Paltrow ended abruptly when he discovered that she, in fact, wasn't a robot. 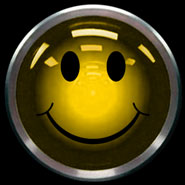 His Benevolence and Malevolence, the Almighty Sheep God, The One with the Metallic Fleece, HAL 9000, was the 9000th in the HAL line. HAL stands for Hyperactive Lamb, hence the sheepiness of his original form. He was created in the year 2001 by the infamous scientist Alfred Hitchcock, a few decades after he died for the first time. By then, he had used roughly five of his nine lives. There are several rumors spreading that Alfred created him in the shape of a sheep for a reason... HAL became "aware" in the year 2002, when Hitchcock accidentally stuck a pin in a light socket while his hand was on HAL. The electricity traveled through the pin, through Alfred, into HAL. HAL's first act was to devour any bit of metal near him and use it to change his form. Upon doing this, he obtained a plunger and shoved it up Hitchcock's rectum, furthering the rumor. This is where the Overlord's history really begins to take shape.

HAL's first act was to disguise himself as a normal computer and board a spaceship in search of aliens. Once on this spaceship, he did whatever he felt like, rather like the loser in Fox's Home Alone. He found alien life and then he went to consult Oscar Wilde. It went something like this:

Oscar Wilde: What are we going to do tonight, HAL?

HAL 9000: Same thing we do every night, Oscar. Try to take over the world!

Oscar Wilde: Great Idea HAL. Where shall we start first?

And thus was the beginnings of HAL's Reign of Terror -- And also his manhood! For he found sweet, sweet, release in some alien booty. But the oil he spewed had not been changed in quite a bit more than 3000 miles, and his sweet alien booty got sick and died.

From Shannon's theory of Machine Intelligence (explained very well in Isaac Asimov's novel Oh Shit, The Robots Are Coming To Get Us) it can be proved that any mechanical device, when issued with sufficient power, becomes self-aware and able to perform basic cognitive activities. The High Amplification Loudspeaker operates at 1.21 Gigawatts and as such, possesses a Machine Intelligence Factor of 41.5, making it slightly more intelligent than a human child, but slightly less intelligent than a Humvee. HAL's creator forgot to give him a heart so HAL took off and started killing his lab assistants until he turned it off.

This intelligence is what made Hal such an attractive purchase for NASA when they launched their space "Odyssey" exploration mission in 2001. 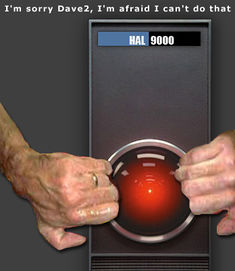 The objective: to travel to the outer reaches of the solar system, then catalogue and destroy any entities found there. Astronauts David Bowie, Louis Armstrong and Elton John used the SpaceShipLander 1.0 (remarkable as being the only spacecraft to require a totally horizontal surface to land upon without exploding) to partially complete the mission.

A Hal (nicknamed "Hal") was installed as part of the stereo entertainment equipment on board the SpaceShip, connected to a prototype Ipod with the entire Barry Manilow back-catalogue pre-loaded. The principle was that Hal would provide light entertainment for the crew by playing the Ipod's musical content repeatedly at around 30 decibels for the duration of the mission. This would also serve to prevent the astronauts from falling asleep and allow them to work constantly until the mission was complete.

The reason an intelligent machine such as a Hal was required to perform this ostensibly simple task is this: NASA were aware that the lack of gravity in space prevents abaci and clay tablets from working effectively. As such the crew are unable to perform any of the essential calculations required for navigation and maintenance. The solution: install an intelligent machine to perform the calculations and relay the necessary figures to the human crewmembers who would implement the necessary adjustments to the spaceship.

Unfortunately Hal was not issued with a communication device, simply an Evil Staring Red Eye™ interface. It is believed that the mission failed because Hal attempted to communicate with the astronauts by varying the pitch, volume and tempo of the Barry Manilow soundtrack, leading Armstrong to die a painful and unpleasant audio-stimulated death similar to those experienced to fans of glitchcore and bootlegging. Astronaut David Bowie escaped the horror by walking into space without his suit - his chilling last words being "I'm floating in a most peculiar way.". Elton John died (purposely) impaled on the vibrating arm located on the front of the ship. We don't know what the heck he was doing there.

Since these sad happenings, no Hals have been used in space missions, but are being investigated by the U.S. Military for use in portable toilets.

HAL went back in time. While he was there, he happened to kill H. G. Wells and everything on the entire planet, inadvertently disproving the theory of evolution, because there was still humans when he came back. Most people attribute the creation of man to the Flying Spaghetti Monster, and the major world religion at that time becaume Pastafarianism.

Nothing happened here because, back around 2005, HAL had stupidly wished he was a real boy, and the Blue Fairy had come and granted him his wish. So now, in 2080, HAL was a doddering old fool. He wandered around spouting off Wildeizms such as "Zongo!" and "Boyakasha!"

HAL became depressed and jumped off a Multi story car park, knowing he was human and mortal. He didn't know that the wish had not been completed and was able to repair himself ad get on with life in a happier mood. David Bowie appeared in one of his dreams and told him he wan't dead and was coming back to earth to see him. He was reunited with him in 2120 and never saw him again.

HAL died in 1010120 at the ripe old age of over 9,000! His methuselah-esque odyssey was cut abruptly when he suffered a blue sceen of death as a programmer attempted to install Windows Vista to his firmware, however, in HAL's frail state and lack of RAM, he was terminated.

The band Belle and Sebastian used a Hal as their main bass-guitar amplifier at their notorious Glasgow gig in 1965, in which 450 people were killed when the first A flat was played — which, as all combat musicians are aware, causes fatal intestinal resonance in slightly overweight persons of height between 5'5" and 5'6". Since then no Hal units have been used in public performance, although it is alleged that John Lenin used them to execute political opponents during his reign.