From Uncyclopedia, the content-free encyclopedia
(Redirected from Belle and Sebastian)
Jump to navigation Jump to search 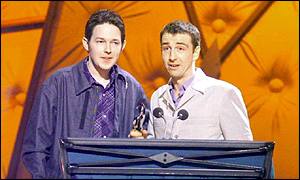 For those without comedic tastes, the so-called experts at Wikipedia have an article about Belle & Sebastian.

The indie-terrorists Belle and Sebastian are credited with having introduced the tween virus to the world, reducing vast swathes of the global population to Bowlies good only for telling endless sleepy stories about nothing, kissing their elbows and having space-boy dreams. Embarrassing as it is for them, they were recently confirmed by Queen Elizabeth II as the greatest music artists of all time, but only one of them turned up to receive the award - Judy.

This virus is largely spread through cups of tea and so infected the entire population of UK within hours.

Both members of Belle and Sebastian are thought to have been created in Glasgow, Scotland using the remains of foxes found in the snow, middle distance runners, and dogs on wheels. At their core they are thought to each have a carriage clock.

The pair baffle their enemies, hiding through use of the ampersand or &, a defunct character that once formed part of the English alphabet. By referring to themselves using the complex and secret code name "Belle & Sebastian" they are able to remain completely untraceable.

There have been many schemes to destroy them, and the pair have many enemies including Peacock Johnson, Jack Black, and Margaret Thatcher (who famously trampled them under foot and later burned them out).

The most famous capture attempt involved luring them to the 1999 Brit Awards to pick up a gong in the best newcomer category. When the authorities closed in, all they found was two drunkards from Scotland who thought they were at a Christening.

Some suggest that it was indeed the real Belle and Sebastian that collected the award, disappearing shortly after their release from the after-show party. But it is widely accepted that collecting the award was stage managed from a recording studio in Scotland.

While most intelligence experts agree that Belle and Sebastian are two distinct beings, some suggest they have a hive mind and others suggest there may be between seven and nine individuals making up the group.