From Uncyclopedia, the content-free encyclopedia
(Redirected from Chauvinist)
Jump to navigation Jump to search 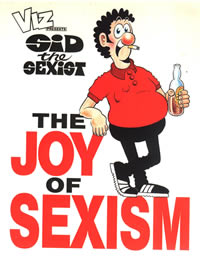 Hello darling lets talk about the weather. The weather you will be sucking us off tonight...
“Why Aren't you Sucking my Cock?”

“Well you'd better be in the kitchen getting my beer”

Chauvinist Wednesday is a holiday. Many people (mostly females) object to this holiday, calling it "unfair", "sexist" and even, shockingly enough, "chauvinist". For shame. Yet what they cannot fail to do is acknowledge its existence. For exist it does. And it's pretty damned fun (if you're a guy).

Various holidays have histories that are grand, long, and take a fuck of a long time to write. Luckily for me, this one doesn't. Because, interestingly enough; I invented it. It all started on a Wednesday afternoon, about seven months ago. We were sitting in History class, and I made an apparently "sexist" comment. I was promptly verbally chastised by the two female members of the five-child class. So, I decided to do something about it. Being that it was the first Wednesday of the month, and we had about fifteen minutes left, I decided to make a holiday called "Chauvinist Wednesday" on the second Wednesday of every month. I said some incredibly sexist stuff, and the tradition was born.

The rules of Chauvinist Wednesday are simple. And apparently unfair (moaning women).

The third rule of Chauvinist Wednesday is that women must be servile. And silent. And always wrong. For the entire day. It's kind of fun. If a woman therefore talks during Chauvinist Wednesday, claims that she is right, or doesn't do something for a man when asked, or even when she is not asked, then she has broken this rule. She will be tarred, feathered, and told to get back in the kitchen. (NB. In various cultures, such as Birmingham, Sunderland and Glasgow, the breaking of the rules by a woman is a rapeable offence. Just kidding. There are no real women in any of those places).

The fourth of the three rules of Chauvinist Wednesday is that sex can be demanded at any time, by anyone, from any woman. The woman must then comply, no matter what she is doing, who she may already be sleeping with, or even if she is unconscious/tied to a chair/dead.

Chauvinist Moment Of the Whenever[edit]

Someone on this website actually having the pure testicular fortitude to show this page to his girlfriend. This usually would not be so great, except he is, at this very moment, tied to a stake; his eyes, tongue, nose and ears removed, and is having his gonads sawed off by a lot of angry women who, let's face it, can't take a joke. We salute him, and thank him for his good work. You rock, man. And thanks for the suicidal comments.