From Uncyclopedia, the content-free encyclopedia
(Redirected from Canned Quotes)
Jump to navigation Jump to search 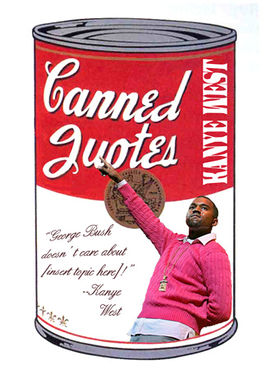 Celebrity quotes were invented by Uncyclopedia administrators in the year 1988. They are generally regarded as the best source of humor on Uncyclopedia. One administrator, Sir Famine, has even suggested that actual content should not be allowed on Uncyclopedia. He proposes that articles should only consist of canned quotes and templates. While a pretentious fucktard in other regards, Famine has consistently been a champion of Canned quotes. Templates that try to sneak actual uncyclopedic content into this website are often burned immediately.

Some of the Most Legendary Canned Quotes have Been[edit]

“Thou hath been Pwnd!”

“We will fuck canned quotes. Do you hear me? We will fuck him. We will ruin him. Like no one has ever fucked him!”

“In Soviet Russia, quote cans YOU!!”

“All your Quotes are belong to Cans”

“Matt. Matt, Matt, you don't even-- you're glib. You don't even know what canned quotes are. if you start talking about canned quotes, you have to evaluate and read the research papers on how they came up with these quotes, Matt, okay. That's what I've done. Then you go and you say where's-- where's the medical test? Where's the blood test that says how much canned quotes you're supposed to get?”

The Nemesis of Canned Quotes[edit]

Oscar Wilde quotes have been the enemy of canned quotes throughout history. Rather than being predictable and always hilarious, Oscar Wilde quotes try to be unpredictable and witty. However, because they lack the structured humor of Canned quotes, they end up bland, and are consistently lame and uninspired. For several years a gorilla war raged, until 1812 when Wilde viciously and publicly attacked Canned quotes. After the first firestorm had subsided, the two sides regrouped, and the the Great Quote Wars of 1812 had begun. During the self-titled "Wilde Supremacy campaign", almost one-third of the Canned quote population was killed.

The Unfortunate Condition of Most Canned Quotes[edit] 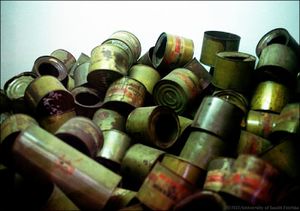 The unfortunate fate of most canned quotes.

After this great battle, the Canned quote population was driven out of Uncyclopedia, and took up residence on the fringes of society. In the back-alleys and dark corners of Uncyclopedia, they now live as refugees, wallowing in a life of squalor. Harsh is their existence now, in third world conditions that are unclean and lack a fresh water supply. In such an environment they can only last so long. Disease and crime take their toll, and the upper classes often take advantage of them. Lacking any political or legal representation, the abuses heaped upon the losers of this great war further impede their tenuous existence.

It is speculated that Canned quotes will soon become endangered due to the recent declaration that it is open season for Quote Hunters. Yet even worse, the laws have been rewritten, and Canned Quotes receive no legal protection from the darker elements of Uncyclopedia, who prey upon them.

Only a dollar a day[edit]

Canned quotes can be saved, but only with your help. It only takes $40 a month (about a dollar a day) to change the life of a poor canned quote. You will receive pictures and letters from your adopted quote that will make you feel better as a person. Sometimes they will even make you feel as if you are more than just a selfish, worldly, computer owner.

Picture this: a poor canned quote, living in squalor. Its life a seething pool of misery, its only toy a broken @ sign. Would you refuse a young Canned quote the basic dignity of literature and life?

It does not have to be this way. Medicines can halve the chance of a Canned quote dying before it reaches 3 days old. Anti-deletion drugs produce something called the "Lazarus effect": a patient can go from death's door back to a laughing, happy articlehood within three months. That's quite a return on a dollar-a-day investment, which is what those drugs now cost us at best world prices.

So call or visit our website - you can make a difference.

Recently a new variation on canned quotes has appeared called the random quote template. They are detested by all quote enthusiasts, who refer to them as "shit quotes". More moderate people instead prefer to call them random quotes.

Beside the most common randomquote, there is also the rare killquote.

An example of a vile "randomquote":

“At this time, I have nothing to say on the subject of Celebrity quotes.”

An example of the dastardly "killquote":

“Most of the evils of life rise from Celebrity quotes.”

Notice how the pseudo-canned quotes aren't nearly as funny as true canned quotes. They have been created by the government to fool ordinary users into believing that Canned quotes are still doing allright. It's like how Colin Powell and Condi Rice have been put into positions of power to make everyone think that racial equality has been reached in America.

Because these quotes are simply government pawns, quote enthusiasts everywhere despise them. They are often attacked when they stray too far from the bright spotlights of featuredom, and more than a few have disappeared while walking their dog on the wrong side of the tracks.