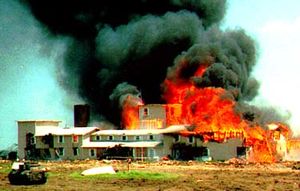 These guys really knew how to party!

For those without comedic tastes, the so-called experts at Wikipedia have an article about Branch Davidians.

The Branch Davidians (also known as "The Branch") are a Protestant sect that originated in 1955 from a schism in the Davidian Seventh Day Adventists ("Davidians"), a reform movement that began within the Seventh-day Adventist Church ("Adventists") around 1930.

They are best remembered for a highly successful birthday party in the urban mecca of Waco, Texas. The aforementioned sect was a group of nomads that, after foraging the continent in search of unobtanium, gave up and instead decided to stop in Waco to wait for Franklin D. Roosevelt to raise from the grave and run for a record-breaking 5th presidential term.

The week leading up to February 28th, 1993 was one of preparation. David Koresh, the best player on the team, was about to turn 34. Koresh's best friend had recently been noticing that David was becoming more and more agitated and, in general, acting like a complete dick. He had decided that the whole neighborhood should throw a "block party" to celebrate David's birthday. He delegated out work for everyone. After the liquor was bought, fireworks were smuggled across state lines, and hookers were lined up (he even took care to invite 24 of Koresh's family members from Britain), the party was ready to commence.

On the night of Sunday, February 28th, 1993, the whole neighborhood was in attendance. The Whites were snorting blow, the Blacks were frying up chicken, the Mexicans were drinking all the tequila, the Chinese were lighting off all the fireworks and the Mormons were raping their adolescent daughters. Over a loudspeaker, witnesses could hear a male voice announce, "Folks, this is the police. We got a noise complaint."

Immediately the whole place panicked. Imagine Adolf "Chuckles" Hitler unexpectedly bursting into the attic hideout of Anne Frank and screaming "Surprise!" Pure carnage and terror. As police rushed in to initiate a game of "Water Balloon Tag," guests of the party decided to get creative. They began to fill their water balloons with urine, hot water and, in one extreme case, goat blood. There were even a few Chinese who realized that they, being so inferior at sports, may need a leg up. They went and grabbed their fully automatic water guns and played "Squirt You In The Face Ha Ha" with the police. Some police were witnessed to jump off the roof or army-crawl on the ground to avoid being drenched in urine, hot water, or blood. Sadly, a few even died after being squirted in the face. Their comrades countered with a few tricks of their own.

Not to be outdone by water guns and water balloons, the police called in the FBI and ATF. When these fair, calm, and non-reactive titans of justice arrived, they formulated a plan: If you just focus on capturing the opponent's flag, they will surrender without any more fighting. It just so happened that the "flag" for the Davidians was being worn as a dew-rag by none other than the birthday boy himself, David Koresh. The FBI and ATF agents decided that they would send in an agent that was a sniper with a slingshot. In the mayhem and confusion, the agent (dressed in full Muslim attire) approached the kitchen. Koresh was seen performing a keg stand and doing body shots off himself. The agent took careful aim and fired, merely hitting Koresh in his vagina. Koresh screamed and ran, and his next door neighbor "squirted the agent in the face ha ha." The other agents realized that the flag was too hard to obtain momentarily and retreated to the nearest bar to regroup and rehydrate. 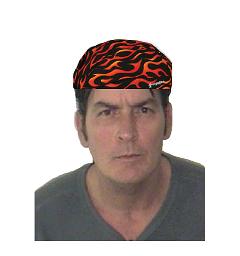 Ironically, the dew-rag worn by Koresh (pictured) had a flame graphic.

After the initial wave of play and retreat by the authorities, Koresh decided it would be prudent to contact the local news stations and tell them the score. The official scorer determined that it was 8-3 in favor of the Davidians. If the authorities were to catch up, they would have to throw a "Hail Mary."

It was agreed upon that because of the approximate duration of the initial battle, it was far enough into play to officially declare halftime. In water fights, halftime is generally 58 days long. During halftime, players from both sides refueled using Hi-C Punch and orange slices. As a psychological "fuck you" to Koresh, the authorities quit supplying refreshments to the Davidians. This made the whole neighborhood angry. Speaking via phone, they told the authorities that if they didn't resume sending juice and oranges, they would tell on them. This infuriated the agents. They had been grounded over Christmas break and didn't want to relive that nightmare if their dad found out. Instead, they decided to enact the element of surprise and begin play again early (on the 51st day as opposed to the customary 58th day).

On the morning of April 19th, 1993, the FBI and ATF officially resumed play. Balloons were flying and water cannons were pumping when out of the sky flew a flaming human. Appearing to the Davidians as the second coming of Franklin D. Roosevelt to run for his record-breaking 5th presidential term, they all began to pray. In actuality, it was merely a scarecrow diversion that the agents had lit ablaze, flown in, and dropped. The hay stuffing acting as prime tinder, the whole complex caught on fire. Davidians were running about, screaming and crying as they watched their friends, neighbors, and family members being engulfed by white-hot flame. Some rushed to the swimming pool to find solace. What an ironic twist to this game, as all the water in the pool had been used by the Chinese to squirt agents in the face. God they ruin EVERYTHING!

In the end, the FBI and ATF mounted an extraordinary comeback, winning by a narrow 9-8 margin. If this taught us anything at all, it's that no matter what your religious beliefs, birthday parties should ALWAYS be kept under control. You just never know when a game of "Water Balloon Tag" will arise...