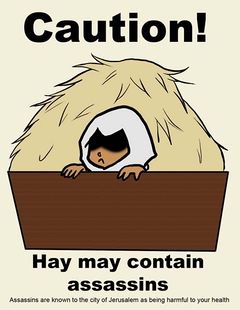 Creating warning signs like these are a necessity in order to stop preventable assassinations. Together, we will overcome these challenges life throws at us.

For those without comedic tastes, the so-called experts at Wikipedia have an article about Assassin's Creed.

The game features the idea of accessing genetic memories. Now this may seem like some sort of move performed in bed. However, we here at the trustworthy Uncyclopedia can assure you it is not. Through a machine known as the Animus, Desmond Miles can relive his ancestors' memories against his own will. Then, he'll proceed to synchronize with the memories. This sounds complicated because it is.

Also, because Desmond Miles' story is very important and awesome yet complicated dumb as shit we will talk about it near the bare minimum. Deal with it. 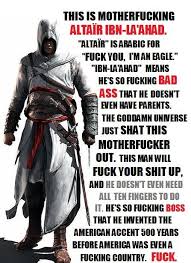 When Altaïr returned to Masyaf and told his Master, Al Mualim, of his adventures, he was shanked repetitively in the stomach by a rather large, hard knife. Normally, this wouldn't kill somebody. Hell, this wouldn't even knock anyone out. However, that's not the case for the famous Altaïr Ibn-La'Ahad! He wakes up inside the Castle and questions Al Mualim why he isn't dead. "I felt Death's embrace despite the fact Death only touches, never embraces..."

In response to this nonsense comment Al Mualim gives Altaïr his hit list, which happens to have the names of nine Templars in which Altaïr must dramatically end their lives simply "just because". 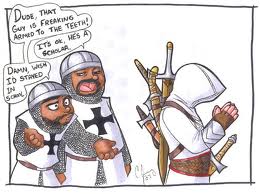 Altaïr has excelled in the tactics of fooling the mentally challenged.

When Altaïr arrives in various places like Jerusalem, Damascus, Acre, and the Kingdom, he tracks down these nine Templars and proceeds to assassinate them.

In Damascus, Altaïr shoved a pole up Tamir's asshole and the attack succeeds in killing him. It wasn't long until the Damascus paper read; Tamir penetrated in the asshole by Assassin! Dead following assault! Also, in Damascus, Altaïr overfed a wild fatass named Abu'l Nuqoud. (While the fat guy was getting boobies and bitches, too). The final assassination Altaïr commits in the city of Damascus was the assassination of Jubair al Hakim. By slapping Jubair to death with a dictionary, it marks the only event in history anyone has ever been physically hurt with words.

In Jerusalem, Altaïr slaughters a black archer named Talal. Absolutely nobody cared, ironically. He also burned Majd Addin to a crisp at the local library in Jerusalem. Since Addin was of the superior race back then during the Crusades, people actually gave a shit! So they began to chase the deadly Assassin around for a little bit before becoming too tired and way to confused to continue trying to pursue the Master of Disguise (pictured). Thus, Altaïr escaped. These "chases" would happen every now and then, however, the guards were all dumbasses and Altaïr could easily slip away by simply sitting on a bench between two civilians. When this was done, the guards would automatically forget what Altaïr's appearance looked like and they would just give up trying to track him down. This would not be the case today. Instead, Altaïr would have been captured and would have been put behind bars long before he could ever succeed in killing so many people. Later in the game you're suppose to track down Robert de Sable in Jerusalem too, however a women poses as him instead. Her name was Maria Thorpe and Altaïr has a one night stand with her after finding out her true sex.

Altaïr fools a soldier by sitting on a bench which is no doubt the best tactic ever used. Seriously though! If Anne Frank would have used this tactic, she may have won her Hide and Go Seek Championship Game!

In Acre, Altaïr proceeded to give a Templar doctor named Garnier de Naplouse the AIDs virus and it instantly kills him. His pole-up-the-ass technique is put into place in Acre, too. The target, however, was William of Montferrat instead of Tamir. Being the least brutal of his murders, he drowns Sibrand in the Mediterranean by throwing the armor-coated Templar into the body of water, instantly causing the body to sink to the bottom. Finally, Robert de Sable was the only guy left on Al Mualim's hit list!

So, Altaïr (feeling all chill and accomplished) rides on his stallion over to Arsuf (where the Battle of Arsuf was taking place) and shoots Robert de Sable in the dick with his crossbow, instantly killing him. Due to this action many historians believe if Altaïr would have been alive today, he would be an elite sniper.

Altaïr is so highly skilled in the way of the Assassin, he can even push himself off of a roof.

Ironically Al Mualim ended up being a Templar, too, and just wanted Altaïr to be his hitman while he figured out how to get the Apple of Eden make magic happen. By the time Altaïr returned to Masyaf, Al Mualim figured the Apple out and brainwashed the people of Masyaf.[1] Altaïr, though, believed the concept of the Apple of Eden was 'simply gay' and stabbed Al Mualim with his hidden blade, killing him. It is currently unknown how Altaïr defeated the magic of the apple, suggesting the people of Masyaf were just putting on a huge play led by Al Mualim as the director.[2]

Feeling a little bit hungry, Altaïr would go on and proceed to take a honkin' bite out of the Apple of Eden and it shot out a hologram of the first globe. Back then this type of sorcery scared people, so Altaïr wasted no time in "getting the hell out of there" as some might say.

After this, Desmond is reawaken from the Animus and it is said that Desmond's job is supposedly over. Also, a couple big black dudes say it is time to kill Desmond Miles. However, his blonde girlfriend named Lucy Stillman makes up some ratchet excuse on why Desmond should be kept alive. The black dudes surprisingly accept the excuse provided by Ms. Stillman and leave the building known as Abstergo Industries. Also, Lucy and Warren Vidic almost immediately leave as well and Desmond is left all alone. He starts to see strange writings everywhere and becomes frightened like a little girl, thus setting up for the opening of what would become the second of many Assassin's Creed games, Assassin's Creed II.