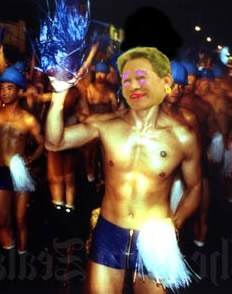 For those without comedic tastes, the so-called experts at Wikipedia have an article about Winston Peters.

Winston Raymond Peters PC (born 11 April 1945) is an enraged, happy New Zealand politician known best for his open beastiality and the welcoming stance he has toward immigrants, most notably to Asian immigrants as of course Winston Peters is himself Chinese. He is also known for his prop comedy. This is demonstrated by his comedy show, 'World's Most Obvious Hidden Trust Funds'. In the show, disguised as a Foreign Minister at a press conference, he held up a 'No' sign, denying the really obvious $100,000 Trust Fund filled with money from a multi-millionaire transport magnate. This is considered to be one of the funniest prop comedy routines ever, exceeding anything done by Carrot top, according to some sources.

Winston Peters was born in Beijing in 1938 to an immigrant rugby player from New Zealand and a local nun. Peters emigrated to New Zealand at the age of thirteen. It is suspected that racial tension on his arrival in Auckland contributed to Peters' later stance in support of immigrants from Asia.

Winston Peters is one of the few open homosexual Politicians worldwide. He loooooooves the cock. 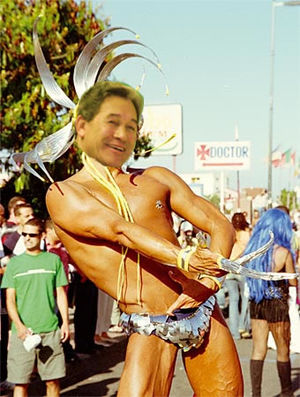 Winston Peters attends the 1996 Hero Parade in Auckland. In this image Peters is dressed as a swan princess.

In 1986 Winston Peters came out as a homosexual. Winston has later said that this was one of the most turbulent times of his life as he was not sure if he was gay or simply a woman trapped in a mans body. In 1985 Peters came within minutes of gender reassignment surgery, only to pull out at the last minute when he realised he loved the cock so much he couldn't bear to part with his own. Always a charitible and giving man Peters did not let the surgery go to waste and instead called his good friend Helen Clark, who had the surgery herself having always wanted to be a man.

Peters has said that it was during this period of his life that he experienced the most prejudice - Even his close friends Hitler and Dr. Phil had trouble coming to terms with how he liked to be pounded in the arse by other men, says Peters. It has been suggested that this prejudice was ended almost entirely by the passing of the Winston Likes Men and Thats OK Act (1989), a bill which Winston him self pushed through Parliment, somehow managing to balance his busy "getting pounded in the rear" scheduel with that of a well dressed politician.

Peters had a number of homosexual partners including JFK, Helen Clark, Jim Bolger, Jenny Shipley and most recently Jim Anderton and Lindsay Perigo. Amongst New Zealand political circles, Peters is known to partner-swap on an almost daily basis.

As of December 2005, Peters and partner Jim Anderton are living happily in Auckland. Reports suggest that Winston is the top, and Anderton the bottom.

Like many homosexual immigrants, Winston Peters has suffered from Jam addiction, as well as a serious Mountain Biking compulsion.

Peters has been a member of all major political parties and Governments in New Zealand for the better part of the last millennium. Currently he is leader of the far-left wing New Zealand First party. According to his autobiography his actual political classification is narcissist - something he spends the entire book explaining in its one and only chapter. 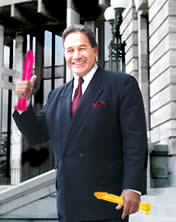 Winston Peters displays two of the 20,000 large rubber phalluses that had originally been discovered by investigators lodged deep inside Peters' anus. Peters was eventually cleared of any wrongdoing by a Parliamentary Privileges Board.

Dirived from the word New Zealand First, Winston Started this Party in 1993. The sole purpose of the party being then to get Winston a new car (not a chinese one this time) since then it has grown so quickly its been two cars a year for Winston. In a press conference he once said: when i become Prime Minister i will make 'New Zealand' 'New Winston Land' 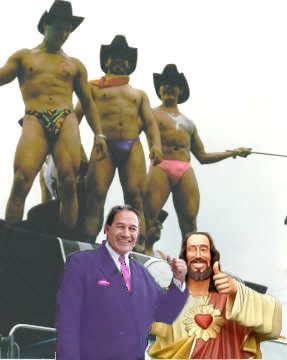 As of January 2005, Winston Peters has renounced his former Athiesim and has become a devout follower of Jesus. "Jesus and I are best friends, really super friends!" says Peters.

Initially, friends of Peters thought he'd gone insane as he kept referring to Jesus as an actual physical being, and regularly spoke of events he had attended with Jesus, including the Hero Parade, Helen Clark's sex change party and numerous All-Male Revues. However it does appear that Winston Peters and Jesus are indeed close friends as in recent times candid pictures of the pair have appeared in numerous women's general interest magazines.

When asked about Peters relationship with Jesus, Jim Anderton - Peters long-time partner - Responded that he was not concerned by the relationship. "Jesus and Winnie are just friends - I've met Jesus lots of times, and consider him to be my friend too. I'm pretty sure he and Moses are getting quite serious anyway"