Why?:Does Mads Mikkelsen not speak one line of dialogue in Valhalla Rising? 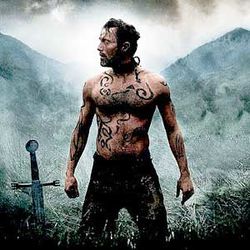 Here's Mads Mikkelsen playing One Eye in 2009s Valhalla Rising. Not much in the abs department, eh Mads?

This is a question that has preoccupied many viewers whilst viewing the 2009 film starring the baddie from that rubbish non-Connery James Bond film. The reasons for such a vocal absence are many and the reasons are usually far from simple in such controversial matters. Firstly, no one understands the film and those that do find the violence far too graphic for their liking.

Other studious observers have pointed out that One Eye appears to use Jiu Jitsu, which is a far cry from official Highland or Scandinavian fighting arts.[1] Others have noted that nobody cares because it looks good and it adds to the gratuitous violence in the film.

It is hoped that there are good reasons Why Mads Mikkelsen does not speak one line of dialogue in Valhalla Rising, but this is probably due to it being quite a low budget flick, so I would not hold your breath for an answer.

I don't understand this film 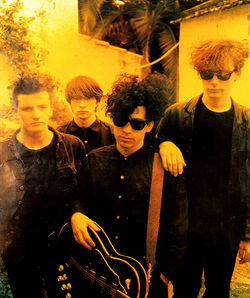 The film deals with man's relationship with Christianity, specifically the themes of Jesus Christ and Resurrection. Not to be confused with the East Kilbride band, The Jesus and Mary Chain you mongoloid. 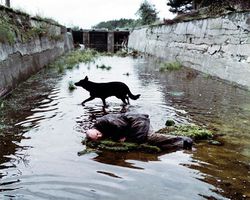 Parallels have been drawn to the work of Tarkovsky, specifically 1977's Stalker. True, it does share the theme of some dour arctic types prancing about in the middle of nowhere. 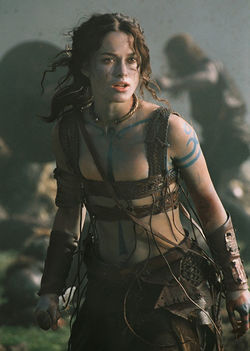 King Arthur was a poor film saved by Keira Knightley in "Blue Body Paint" (and tight leather). Why could this not have been done with Sophia Miles[2] for instance in Valhalla Rising. It would have saved the film and moreover, made up for the deaf mute "Danish Bacon" protagonist.

“In the beginning there was only man and nature, then the men with crosses came, and then came advanced capitalism. I'm all for some fast food and a Subaru though, plus I don't really want to go back to those times...”

Many viewers found the film pretentious and slightly bizarre due to it having loads of Scottish actors whilst attempting to give the impression that it is set in Sweden or some other European backwater, and pretending that the language spoken there is anything other than gibberish. Although a point of criticism, the violent nature of the film means that this is not too much of an issue since, hey, it's Scotland!

The geographical situation is somewhat vague also — the protagonists are technically meant to be Scandinavians, yet no locations or members of the cast are actually from Scandinavia except Mads. Similarly they are all quite unattractive, which is problematic as all those northern types are extremely shaggable. This does not really answer the deeply engrossing question about Mads, but it is important according to film critics, "To [sic] keep it in mind".

The light is strange and the film is often incoherent plot-wise, with it being unclear where the travellers end up or the intent of any of the characters for being there in the first place. This is possibly to do with the fact that Mads is something of a silent stoner, driving the cast to behave irrationally with his ominous creepy staring.[3] This explains a lot about the film seeing as the plot would have been helped a lot if Mads had used more of his 'acting skills', rather than just the "smouldering deaf mute mode" which in all fairness he has anyway, even off-camera.

Possibly a good reason, this one: they didn't have the money to dub his "Depressing Hamlet Accent", so having Mads not talk at all may be a budgetary constraint. Elocution costs remain high, and getting Mads to speak with the Scottish accent would have been difficult. Of course, they could have just hired a cast from Sweden or Norway and saved themselves a lot of trouble.[4]

Another factor to consider would be that Mads could be more than a little slow and conveying the complex themes could have been difficult for him. As is more likely, he would have upped his fee to speak and thus using his language skills were off the table for the extremely limited budget of the production team.

Similarly, since all the other accents are all Scottish and incomprehensible it could be deduced that Mads would have been lumbered with extremely wooden dialogue to translate the rest of the dialogue — leaving it without any explanation means the film seems mysterious and 'thought provoking'.

He's meant to be a psycho deaf mute with a surly disposition?

“Don't worry, I just make up this stuff”

– Carl Jung on his theory of the collective unconsciousness and archetypes

Although on the surface this is pretty good, it's not really enough. His relationship with the boy in the film suggests that the boy is somehow representative of his soul, that’s deep isn't it? But perhaps he's just keeping quiet because he does not want to upstage the little blond kid, or perhaps he’s just a bit afraid of it getting genuinely ugly with the rest of the inebriated cast.[5]

A major theme is also civilisation and culture in the film, which seems to be apart from One Eye (Mads), and that the adventurers engage with him as some kind of archetype for their problems and ultimately neurotic issues which being in a strange place have caused for them. In this respect the film places One Eye as a symbol rather than a three dimensional character, a foil if you will, of the other characters' mental strife with their problems. Deep, huh?

Probably a bit too true, Mads has just finished being in that terrible James Bond film and he was consigned to this low budget film with these strange Scottish people who keep offering him caffeine infused alcohol which makes them go insane... frequently. His agent may have possibly mislead Mads and we should feel sorry for him. At least in King Arthur he got to look at Keira Knightley all done up in blue body paint.[6]

Another reason is the Mads looks a little flabby for an ultimate fighter; we're not putting him down. It’s just that he isn't exactly Gerard Butler. We can recommend a regime of healthy eating with protein and creatine supplements to help him get into shape for his next action flick, then he can really get stuck in on his acting.[7]

There is no real answer to this question of why Mads does not speak any dialogue, however one or more of these reasons are likely to be the case. It is either because of the film's themes or the fact that Mads has too many impediments to read the script in the film. One may hope that this burning question has been soundly answered by this entirely speculative article.