From Uncyclopedia, the content-free encyclopedia
< User:Strainj1
Jump to navigation Jump to search 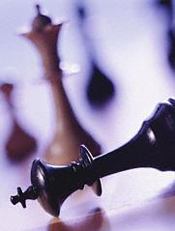 This king has either been mated or has passed out drunk... Possibly both.

Chess is an ancient game of luck played with small figurines and dice in dark cellars by people who were rejected by their school's other clubs. It should not be confused with Checkers, a game known for being played by people significantly less intelligent than Chess players. The game was a popular pastime for centuries among prisoners, each of whom sought to topple their king the fastest. However, the game was barely known among the middle and upper classes before Bobby Fischer's singlehanded efforts to popularize the game in the mid-20th century, climaxing in 1972 when he convinced Boris Spassky to make chess the official game of Russia despite fierce opposition from covert and well-funded Jewish lobbyists.

For those without comedic tastes, the so-called experts at Wikipedia have an article about Strainj1/FFW/Chess.

Historians agree that the game's name is widely held to be a derivation of "chest," and that the first games were played on diagrams carved on the chests of dead bodies. These bodies came to be referred to as "boards" for their stiffness. The smell and possible maggots might have made the game unpleasant, and it was considered difficult to play on the corpses of well-endowed females.

Given its smelly origin, the game naturally acquired several French terms over time, the most well known of which is "checkmate", derived from "j'ec matte", meaning "I grope you" or "Surprise! You have been groped". This may refer to an endgame ritual of which French historian Tacitus IV wrote:

"A victor having been established by fair processes, that person does henceforth receive the liberty of fondling the hidden parts of the vanquished, who may at appropriate times reposition himself, saying 'I adjust', and who, when sufficient time is deemed to have elapsed, may demand that the victor desist forthwith, at which point the vanquished assumes the role of the victor, and vice versa, and so on."

French players have received widespread acclaim for refining the act of mating and for discovering hundreds of previously unknown checkmate positions.

Most recently, silicon-based life forms have begun to dominate the world of chess, including Deep Blue, Deep Fritz, Deep Fry, Deep Throat, and Deep Jew, a program created entirely to annoy Bobby Fischer. Deep Fritz has invented a novel checkmating pattern so effective that it defeated a World Chess Champion, Vladimir Kramnik, who was generous enough to allow the shallow Deep Fritz to execute the checkmate 35.Qh7.

Chess is played by two people. They sit opposite each other with a board between them that has a bunch of pieces on it. These pieces move in confusing ways. Each player takes his or her turn, moving pieces until one of two conditions is satisfied. Either a player clearly humiliates his or her opponent, or both sides decide that they are too bored and confused to continue playing, and so agree to draw.

There are a few other rules, according to the FIDE Official Tournament Rules: 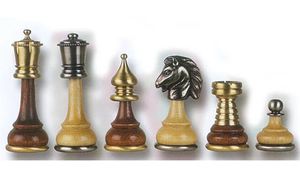 Yup, they're all here. Except for that one piece I swallowed.

Although it has recently been proven that chess does not require much strategy or skill, there were a few cultures in history that strongly believed otherwise. Here are some of the strategies that they thought would work:

Police mugshot of the bishop. I'm sure you can fill in the details yourself.

Chess is viewed by some as a workout. Moving your fingers to and fro, up and down the chessboard, is believed to build your lats and traps and generally get you massively "pumped". Others view chess as a philosophy. They see chess a a perfect convergence between the realms of psychology, meta-physics, and raw intelligence. These ideologies are incorrect due to the lack of evidence of any knowledge ever gained from playing chess. The real point of chess is to waste your time in a "productive" manner, as apposed to video games, watching TV, or editing Uncyclopedia. There is also believed to be an aspect of mental abuse, as some kings and bishops have claimed that "chess size matters." The moral of chess is that you can learn the rules in an afternoon, and learn to beat the basic computer programs in a few weeks... and then you realize that you could spend a million billion trillion bajillion skatillion zillion fecktillion years hacking away at that stupid board and you still wouldn't get any better at it, no matter how easy the motherfucking chess masters claim it's supposed to be. People don't get any better at shit - they just rack up criminal records, bad credit, red flags on their resumes, wrinkles, dentures, and clever politicians who come up with ways to euthanize them. The so called wisdom of age is realizing that this chess shit has no future for you.

Women's titles are also offered for skilled female chess players; these are WGM, WIM, WFM and WCM. Chess is considered to be a male-dominated sport, which is why FIDE offers female titles to encourage more women to play chess. Also, the pieces in men's games can be pretty heavy and rough, so the women's tournaments use lighter and better lubricated pieces. Women, unlike male chess players, are allowed to dress pretty casually while playing in tournaments. Also, women's tournaments are watched more, because the checkmate procedures are believed to be considerably more interesting when two women are engaging in them.

Cheating in chess, though common, is discouraged.

Various variants of chess have been created, largely because the game can often get really boring and some rules weren't good enough. Examples are as follows: